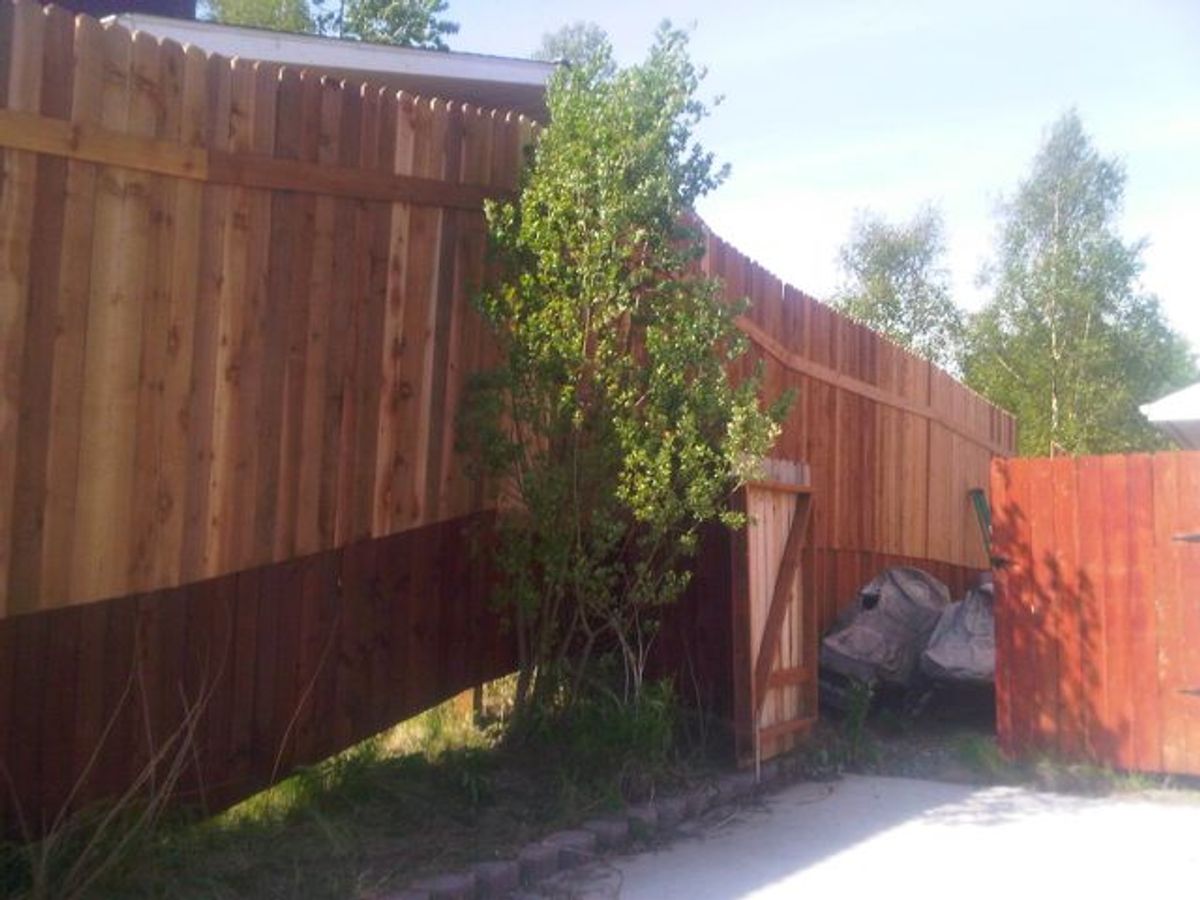 Greta Van Susteren, the Palin family's royal scribe and my favorite blogger, posts a picture of the fence Sarah Palin has erected to protect herself from 67-year-old journalist Joe McGinniss. Van Susteren does not refer to McGinniss by name, though. According to supposed professional journalist Greta Van Susteren, the fence was built "to protect against the 'Wasilla Stalker.'" (I guess it doesn't count as stalking if your obvious and creepy Palin obsession only leads to friendly coverage.)

How did McGinniss get into this house, exactly? Because the Palins decided not to buy it, and then they pissed off its owner.

According to Alaskan blogger Shannyn Moore, the house next door to Palin was an Oxford House, housing recovering addicts recently released from prison, for three years. Last year, the Palins rented the house themselves, but decided not to buy it.

McGinniss' son Joe McGinniss Jr., who continues to receive hate mail intended for his father, tells Ben Smith that the owner of the house turned down offers from the actual tabloid media, but sought out Joe McGinniss because of a property dispute with the Palins.

In case you're wondering just how effective the "Joe McGinniss rented this house because he is a pervert who wants to watch Sarah Palin's children change" line is, here are some of representative comments from Greta Wire readers:

Good Job Todd Palin. It's a shame that you have to do this to keep an unethical media idiot from spying on your daughter's bedroom and on your backyard where your kids and grandkid play. Shame on him!

Who is the person that rented to this peeping tom anyway? Sarah should buy the property herself and tear it down! This guy is a real creep and would hate him to be peeping at my family.

Maybe Ms. Palin should move here to the lower "48" while the SICKO is in Wasilla. Is he perhaps, a pedophile? KEEP THE CHILDREN AWAY!!!!!!!! Order of protection-500 ft. minimum!!

This is just creepy and sick. Notice - he'll only be there for the summer months - doesn't have the guts (not my original wording) to stay the winter.

WOW!THE HIGHEST I CAN GO IS 6 FEET HIGH!

After that idiot moves out, I hope she takes the 16 foot fence and donates it to Arizona to help a little with the border problem ! Just a dream I have ignorant neighbors as well! I put up security camera's and it's pointed directly at their houses! They called the police on me It's legal and I just bring the cd down to the police station and There's the proof on video with sound! It helped a little, but Sarah should to do the same-"HOW DOES IT FEEL?" sort of thing! Security camera's tape 24/7!

Forget the fence. The Palins' need to confront the issue head on. What ever happened to punching a bully's lights out as the first reaction? The big dog always wins. Be that big dog, Sarah.

HOPE THE REAR-ENDS OF THOSE SNOWMOBILES ARE UP!