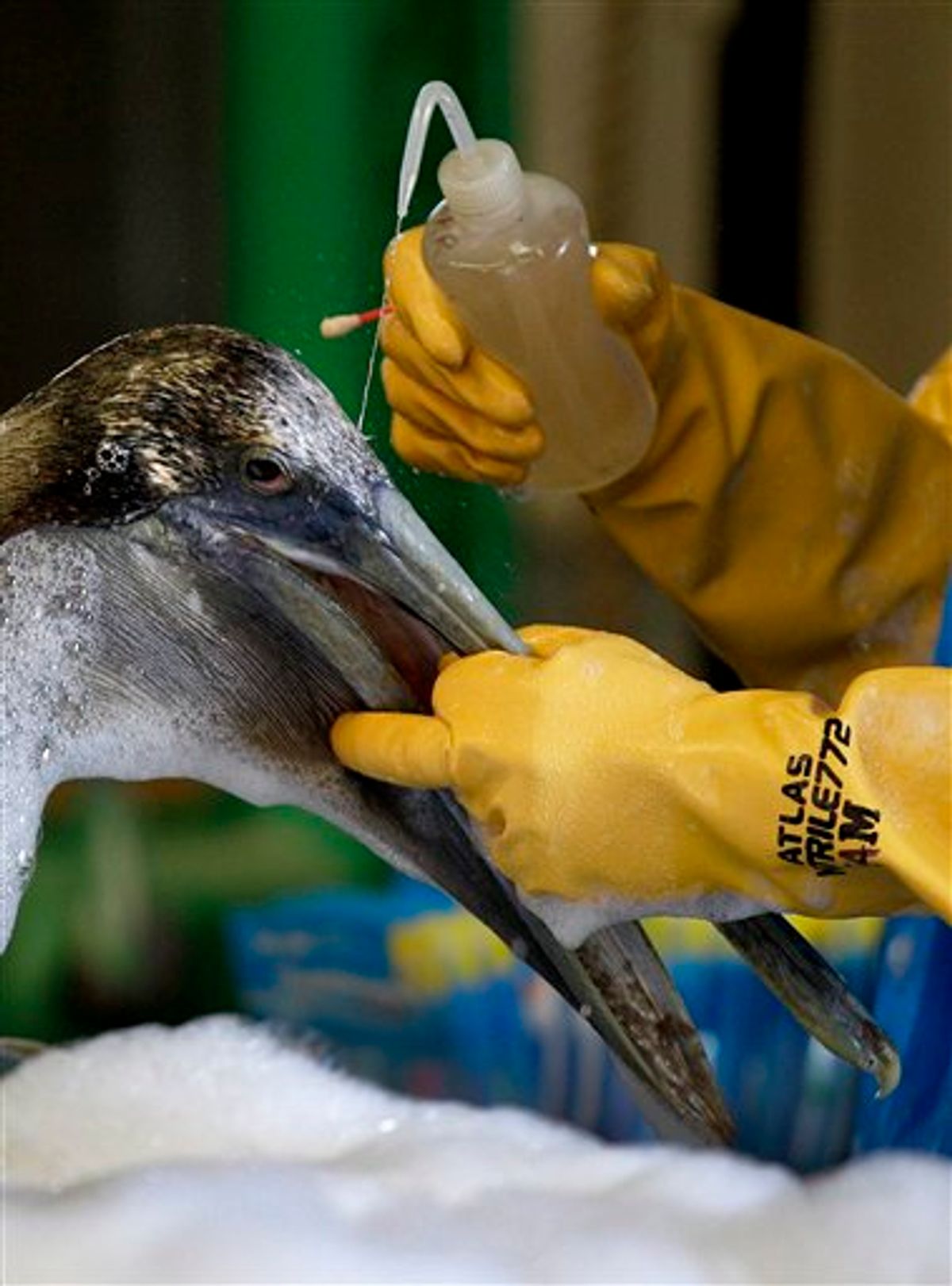 A Brown Pelican is cleaned Saturday, May 15, 2010 at the Fort Jackson Wildlife Rehabilitation Center at Buras, La. The bird was rescued after being exposed in an oil spill in the Gulf of Mexico caused by the explosion of BP's Deepwater Horizon oil platform more than three weeks ago. (AP Photo/Charlie Riedel) (AP)
--

The Gulf oil spill has surpassed the Exxon Valdez as the worst in U.S. history, according to new estimates released Thursday, but the Coast Guard and BP said an untested procedure to stop it seemed to be working.

A team of scientists trying to figure out how much oil has been flowing since the offshore rig Deepwater Horizon exploded April 20 and sank two days later found the rate was at least twice and possibly up to five times as high as previously thought.

U.S. Geological Survey Director Marcia McNutt said two different teams of scientists calculated that the well has been spewing between 504,000 and more than 1 million gallons a day.

BP and the Coast Guard estimated soon after the explosion that about 210,000 gallons a day was leaking, but scientists who watched underwater video of well had been saying for weeks it was probably more.

Last week, BP inserted a mile-long tube to siphon some of the oil into a tanker. The tube sucked up 924,000 gallons of oil, but engineers had to dismantle so they could start the risky procedure known as a top kill to try to cut off the flow altogether by shooting heavy drilling fluid into the well.

If that works, BP will then inject cement into the well to seal it. The top kill has been used above ground but has never before been tried 5,000 feet beneath the sea. BP pegged its chance of success at 60 to 70 percent.

Lt. Commander Tony Russell, an aide to Coast Guard Adm. Thad Allen, said Thursday that the flow of mud was stopping some oil and gas but had a ways to go before it proved successful.

"As you inject your mud into it, it is going to stop some hydrocarbons," he said. "That doesn't mean it's successful."

"We appreciate the optimism, but the top kill operation is continuing through the day today -- that hasn't changed," he said Thursday morning. "We don't anticipate being able to say anything definitive on that until later today."

Oil has been coating birds and delicate wetlands along the Louisiana coast, and the political fallout from the spill has reached all the way to Washington, where Democratic sources said Thursday that the Obama administration has fired the head of the U.S. Minerals Management Service in response to blistering criticism over lax oversight of offshore drilling.

The sources, speaking on condition of anonymity before the official announcement, told The Associated Press that President Barack Obama would announce the decision Thursday. Elizabeth "Liz" Birnbaum had run the service in the Interior Department since July 2009.

Fishermen, hotel and restaurant owners, politicians and residents along the coast are fed up with BP's failures to stop the oil, and the anger has turned toward Obama and his administration. Polls show the public is souring on their handling of the catastrophe.

On Wednesday, the Coast Guard pulled commercial fishing boats from oil cleanup efforts in Breton Sound off the Louisiana coast after several people became ill. Crew members on three vessels reported nausea, dizziness, headaches and chest pains, the Coast Guard said. Four people were hospitalized, including one who was flown to a hospital.

The only permanent solution is drilling a second well, but that will take a couple of months.

Though the spill is now the biggest in U.S. history, it's not the biggest ever in the Gulf. An offshore drilling rig in Mexican waters -- the Ixtoc I -- blew up in June 1979, releasing 140 million gallons of oil.

Borenstein reported from Washington. Ben Nuckols in Covington, La., and Andrew Taylor and Matthew Daly in Washington contributed to this report.