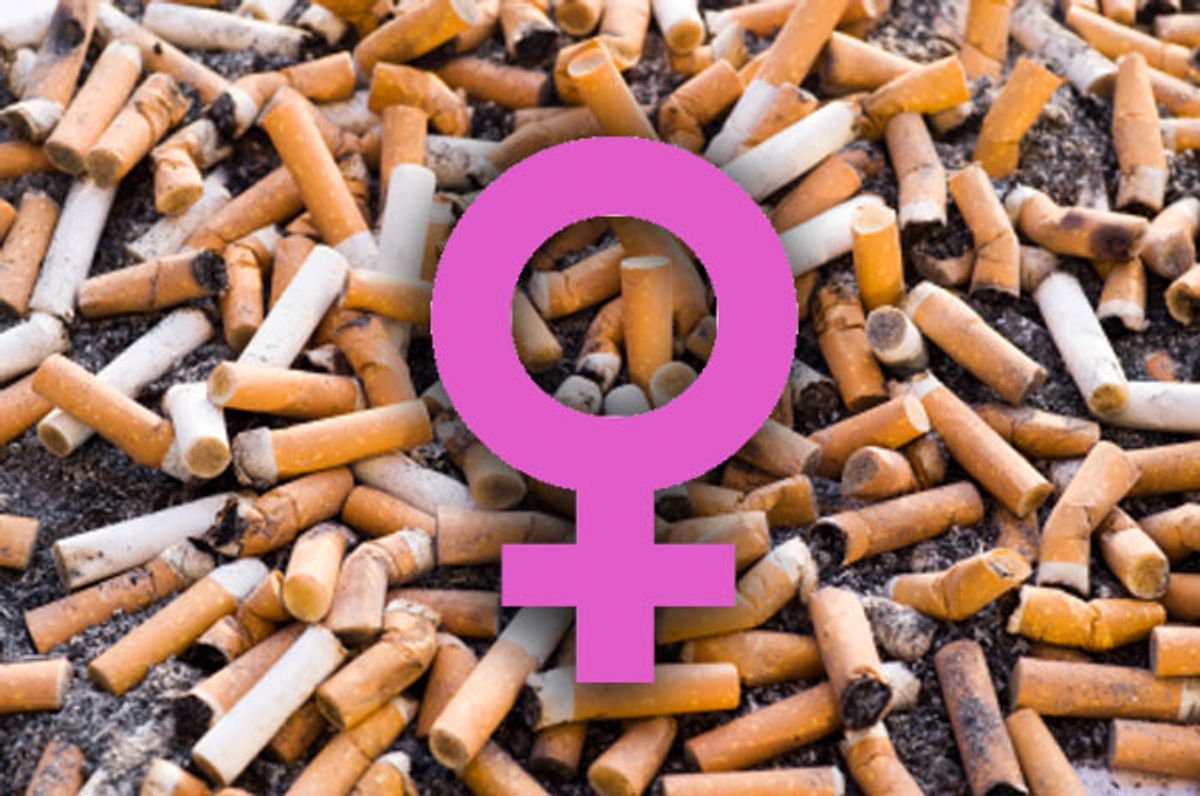 A sweeping survey of over a dozen developing countries and their attitudes towards tobacco has found that young women are increasingly being lured into the death trap that is cigarette addiction. Having successfully conquered the global male demographic, the tobacco industry is now shifting its focus to the female market with flavored brands and bright-and-shiny packaging.

I started smoking when I was 15, despite having crazy asthma, probably because kids I knew smoked, my mom smoked, and I was convinced of my own invincibility. I told myself throughout my 20's that I would quit when I decided to have a baby, because I refused to be one of those girls with the bulging abdomen, a glass of Gallo, and a pillar of ash hanging off the end of my Pall Mall. Now I'm in my early 30's, with no desire to have a kid, and my best-laid-plan has gone kaboom. My husband and I are on the nicotine patch, and I've cut my intake by 75 percent, but that last 25 percent seems like a climb that's so uphill it's actually Half Dome.

But I have the benefit of easy access to smoking cessation products, hotlines, free literature and support groups, and, to a lesser degree, skyrocketing tobacco prices to act as a deterrent. The women in the surveyed countries (Bangladesh, Thailand, and Uruguay among them) aren't going to walk into Costco and buy three weeks of Nicoderm for 30 bucks. And with incredibly high numbers of male smokers in these regions, no national campaigns to guilt people into quitting, and very few restrictions on advertising and marketing, not smoking begins to lose its luster. Because despite the risks, smoking is delicious -- nicotine addiction is insidious and persistent and wonderful all at once.

You might have heard about Kelly Clarkson's run-in with tobacco marketing overseas -- an Indonesian company was sponsoring her concert there, and put her face on a huge billboard with a pack of smokes; the U.S. outrage was profound and noisy. But it's par for the course there, where advertising strategies are both audacious and cloying. We have perfected this kind of pandering in the United States, and the greediest facets of our brand of capitalism seem to have snaked their way into areas of the planet that don't have the resources to dedicate to prevention.