In search of the perfect baguette

How good can bread be? I'm starting to figure it out, and it's as much about how I taste as how the baker works 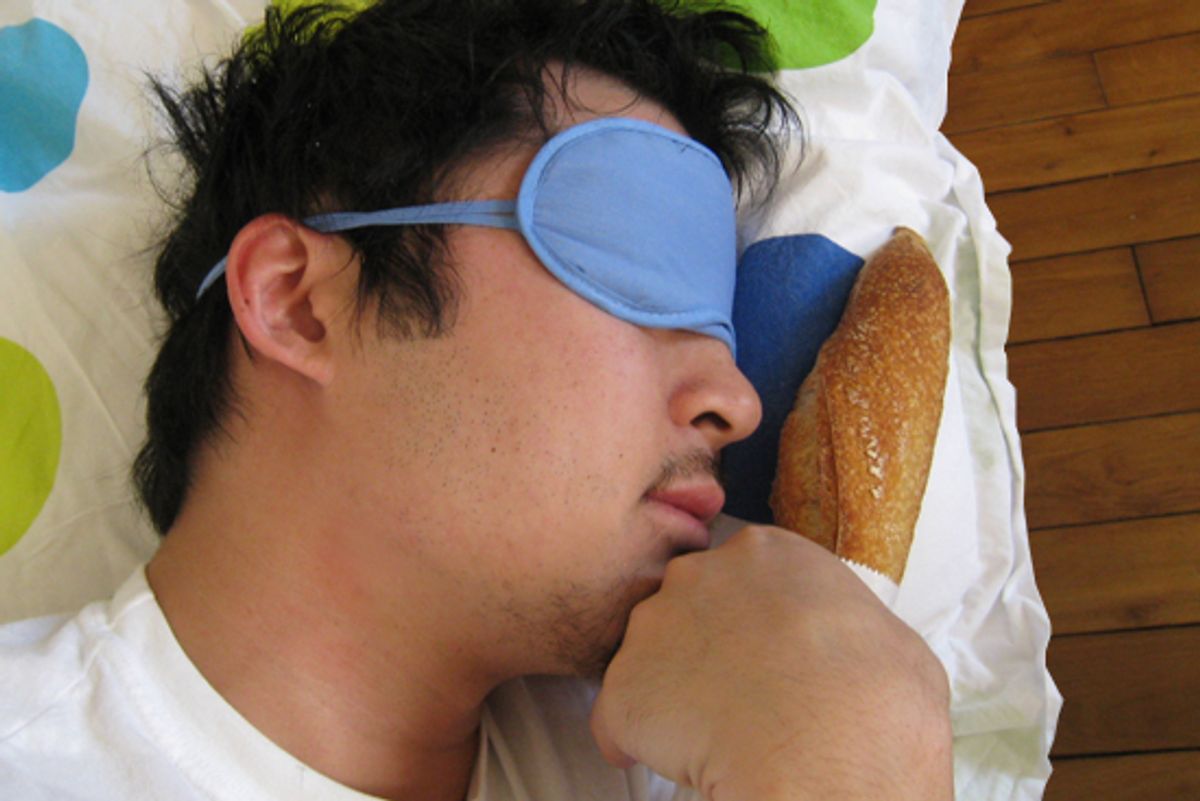 The baguette is the national bread of France (literally -- the recipe and cost used to be regulated by the government so everyone could recognize and afford it). Since my trip here is based on discovering the true foundations of French cuisine, I figure I should get to work quickly on calibrating my appreciation for this long stick of bread.

My friend Julia came back to her apartment. It was early, I was still lying like a sack of potatoes on her couch, and she handed me a baguette. "Here," she said. "Cuddle with this. It's still warm and toasty." I took the bread and held it to my chest. I fell back asleep and dreamed that it told me it loves me.

The Eric Kayser baguette is one of the first things I ate in France, and it was the kind of experience that makes you think that you done did do something right. The first thing was the crust -- both crisp and crunchy, a thick-cut potato chip crunchy, a bass-drum kind of crunchy. I actually laughed out loud, thinking about the fact that I've had bread before that I called a "baguette" that was so floppy you can bend it 90 degrees without ripping into the dense, smooshy, Wonder Bread-tasting insides.

I noticed the flavor next, the flavor of a great bakery. Not that new-baked bread smell, mind you -- not the caramelly, toasty smell of dough in ovens, but a deeper, further-in smell. The smell of the bake shop where dough lives breathing its clean, weird yeasty smell of wheat and microbes and magic. And buried even deeper inside that baguette was a flavor of oysters. I'm serious. Oysters, the melon-like ring of oysters. You're going to think I'm crazy. Maybe I am going crazy. I may, technically, have had better bread than this. But this is the happiest bread of my life.

And so I kept eating, just munching on bread until the deep bell-ringing crunch gives way to a thinner, more yielding crust and an inside crumb that is so chewy it springs back up when you pinch it with your fingers. You can see its lightness, the large, irregular holes in the dough -- evidence of a long, natural rise. The meat of the bread looks a bit like caverns and catacombs, the walls showing a bit of glossy shine from the protein net -- developed through careful kneading -- that ties it all together and gives it its satisfying chew.

Julia put some eggs in water, and soon I was eating the most primitive of breakfast sandwiches, muttering to myself that there is just no way a piece of bread and a cut-up hard-boiled egg can taste this good. No way. And I kept thinking how I never want this breakfast to end.

The next day, the friends I'm traveling with arrived, and on the way over stop by the Eric Kayser bakery to grab a baguette of their own. They both used to live here, and know it well. They rang the bell, we hugged, and my eyes opened wide when I saw the bread in its paper bag sleeve.

They took bites. Their smiles tightened a bit, and one finally said, "I don't think it's as good as it used to be."

My heart broke. I asked for a bite of their bread, and, sure enough, it was not as good as the one I had yesterday, which in turn was a little better than the one I had the day before. I didn't hide my disappointment. I might not be done looking for the best baguette in Paris, even though on a good -- and probably even on a normal day -- Eric Kayser makes the best baguette I've ever imagined.

But I thought about it some more, and discovered something about what it means for me to be in this country looking for culinary benchmarks: It shouldn't be about finding "The Best." It's about finding something that makes you happy and makes you ask, "How can it get even better than this?" It's about finding the bites that show off characteristics I never thought existed in that food, or ones I never thought could be so much themselves. And once that door is open, I can start to wonder if it can be even more that way.

And, really, that's not even about being in France, it's not about making a food pilgrimage. It's an experience anyone can have anywhere. Like literature, like film, like anything worth caring about, the artist only does one half of the equation; it's up to the audience to care about it enough to do the rest, accepting the idea that tasting is worth concentrating on and thinking about. From there, it's just a matter of eating things, discovering what you like about them, and keeping that in mind the next time you eat that thing. After all, you don't find memories, you make them.

Like this, for example: Yesterday, remembering that a common snack for French schoolchildren is a little sandwich of bread and chocolate, I stuffed a piece of Eric Kayser chocolate tart into one of his baguettes. And it tasted like God speaking.