Will the Gulf oil disaster mark the turning point for meaningful energy legislation?

The longer the BP oil leak gushes, the better the chances that rescue is on the way ... for the planet 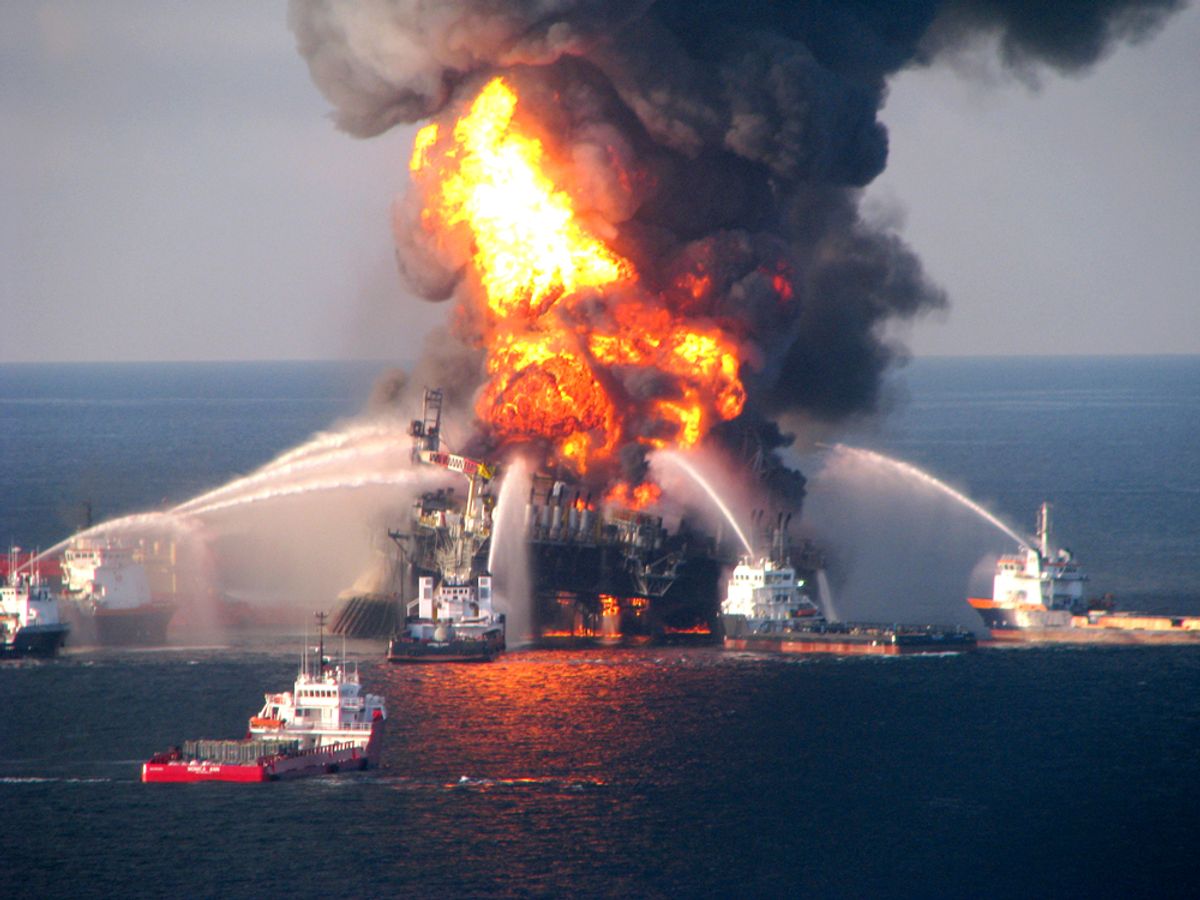 Fire boat response crews battle the blazing remnants of the off shore oil rig Deepwater Horizon, off Louisiana, in this handout photograph taken on April 21, 2010 and obtained on April 22. Eleven workers were missing and 17 injured in an explosion at the Transocean oil drilling rig, and crews were fighting the fire 16 hours later, the U.S. Coast Guard said on Wednesday. An estimated 126 people were aboard the Deepwater Horizon at the time of the explosionA Coast Guard MH-65C dolphin rescue helicopter and crew document the fire aboard the mobile offshore drilling unit Deepwater Horizon, while searching for survivors April 21, 2010. Multiple Coast Guard helicopters, planes and cutters responded to rescue the Deepwater Horizon's 126 person crew. Picture taken April 21, 2010. REUTERS/U.S. Coast Guard/Handout (UNITED STATES - Tags: DISASTER ENERGY IMAGES OF THE DAY) FOR EDITORIAL USE ONLY. NOT FOR SALE FOR MARKETING OR ADVERTISING CAMPAIGNS (Â© Ho New / Reuters)
--

On May 13, BP CEO Tony Hayward told the Guardian that we should try to put the Gulf oil spill in context: "The Gulf of Mexico is a very big ocean," he said. "The amount of volume of oil and dispersant we are putting into it is tiny in relation to the total water volume."

Two weeks later, on Friday morning, Hayward told CNN, "This is clearly an environmental catastrophe. There is no two ways about it."

What happened in the intervening fortnight? Well, according to the U.S. Geological Survey, anywhere between 7 million and 14 million additional gallons of oil spewed forth into the gulf, almost undoubtedly hurtling the BP oil leak past the Exxon Valdez into first place on the list of worst oil spills in U.S. history. That is a historic honor. Tony Hayward's name will be remembered for generations.

A disaster on such a scale changes popular attitudes, has already led to dramatic new restrictions on offshore drilling and will spur major regulatory changes governing future drilling. And maybe, just maybe, with a little (actually, a lot of) assistance from President Obama, the BP oil spill will help get vitally important energy and climate change legislation passed. If so, irony of all ironies, we may end up looking back at this horrific accident and remembering the fiery explosion of Deepwater Horizon as the moment the Earth was saved.

In this scenario, the worse the spill gets, the better the politics in support of meaningful energy legislation become. The initial political conventional wisdom immediately congealed around the prediction that the oil spill torpedoed any chances for legislation. No longer would the White House be able to offer expanded offshore drilling as a carrot to Republicans in exchange for agreeing to a cap-and-trade deal. Of course, before the spill, even the likelihood of that kind of horsetrading seemed increasingly infinitestimal, as Washington demonstrated less and less of an appetite for a big energy bill during the middle of an election campaign.

But now that the most riveting new reality show on television is the live camera feed of the oil leak, attitudes seem to be changing. President Obama recognized this fact yesterday:

"If nothing else, this disaster should serve as a wake-up call that it's time to move forward on this legislation."

On cue: Washinton changes tune. Oh how I do love the smell of fair-weather politicians shifting tack in the morning: Politico reports that there are "new signs of life" for a climate bill!

Now, far it be it from me to suggest to the good people of Louisiana or Mississippi that in the interest of finally taking serious action to reduce greenhouse gas emissions and aggressively move toward a green energy grid, they should come to terms with the sacrifice of the Gulf of Mexico. And of course there's nothing automatic about this. Republicans even now are hopping mad about Obama's new restriction on offshore drilling; they won't lie down and be steamrolled by a new pro-climate legislation consensus. Obama will have to work hard, spend political capital, and make the case day in and day out, all summer long. There are only five months left to Election Day; it would require a superhuman effort to get another major piece of legislation through the Senate's sausage grinder by then.

But here's the amazing thing. With each day that BP fails to stop the leak, the job of passing energy legislation becomes a little less difficult, and little more simple common sense.