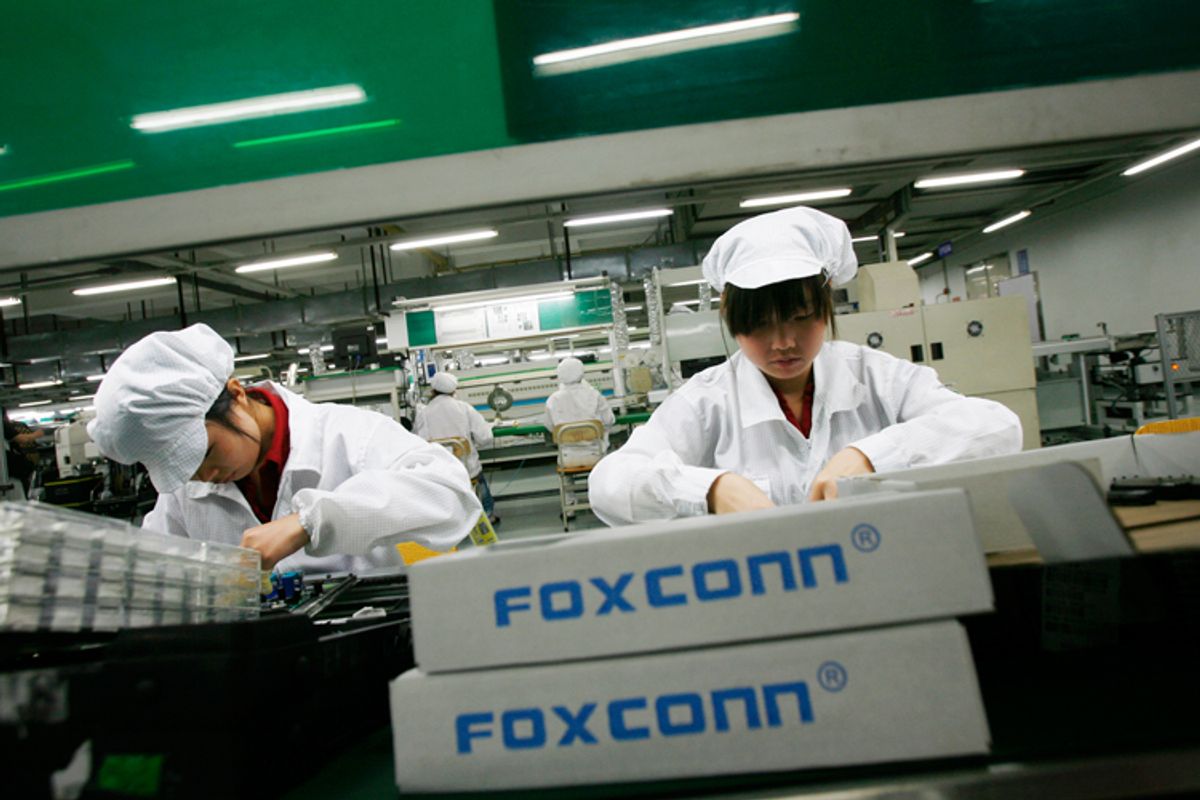 Workers at a Foxconn factory in Longhua in the southern Guangdong province on May 26.
--

It's not the kind of tactic your average union organizer would recommend, but it does seem to be working. After the 10th suicide this year at its Chinese factories, on Friday Foxconn announced plans to raise the average wage of its workers by 20 percent. If we're lucky, we'll see a corresponding price hike on items available at your local Apple store or Best Buy.

The move is sure to be far more heartening to  Foxconn's labor force than the previous request that workers sign no-suicide pledges. It's also obviously a good deal more expensive, from the corporate point of view. With a workforce (in China) approaching half a million employees, a 20 percent pay raise is no trivial matter. In is, in fact, a blow aimed directly at a key leg of China's comparative advantage in the global economy -- cheap labor.

It will be fascinating to watch the long-term ramifications that could ripple out from Foxconn's concession. Higher wages for Chinese workers would be a great boon to the world in general, boosting local demand and reducing wage pressure on developed-world blue-collar workers. But higher wages would also presumably mean higher prices for iPhones and iPads and Wiis and every other state-of-the-art consumer electronic/computing device assembled by Foxconn workers. So the logic of capitalism would seem to mandate that the companies that contract with Foxconn for its manufacturing capabilities -- Apple, Dell, HP, Nintendo, etc. -- will continue to seek the lowest manufacturing costs possible and look for other suppliers.

That won't be all that easy: There aren't a whole lot of factory complexes that employ 300,000-400,000 workers and have the technical capacity to roll out iPads. But it would also be entirely self-defeating, if we are to take at face value Apple's statement that it "is deeply committed to ensuring that conditions throughout our supply chain are safe and workers are treated with respect and dignity."

Let's not beat around the bush. "Respect and dignity," bottom line, translates into higher wages. Wages that are high enough so workers don't feel compelled to sign up for crushing overtime hours, for example, or high enough so workers can save enough cash to provide them with future options, such as escape from the crushing drudgery of a high-tech assembly line.

You don't have to look far to find commentators arguing that the actual suicide-per-total-workforce ratio at Foxconn compares favorably with suicide rates in at-large populations in developed countries. Putting aside the sheer heartlessness of such an argument, this analysis ignores the fact that there appears to be an accelerating problem at Foxconn, and willfully, shamefully, misses the deeper point.

There is a great injustice at the heart of the whole process of exploiting cheap labor to make the must-have googaws for the world's affluent. Every suicide at a Chinese factory is an exclamation point at the end of that last sentence. Both the Chinese and international media know this, and so do Apple and HP and Dell and Foxconn's top CEO, Terry Gou. It just doesn't look good when your employees start jumping out of windows in steadily increasing numbers. It is a sign that something is very, very wrong in how humans are organizing themselves on this planet. We don't want to think about it when we're playing with our smart phones, or reading the new Wired app on our iPads, but it's the truth, and it bears constant investigation.

Or at least a fat raise.