The king of the zombies is back!

"Survival of the Dead" puts director George Romero where he works best: Among the brain eaters 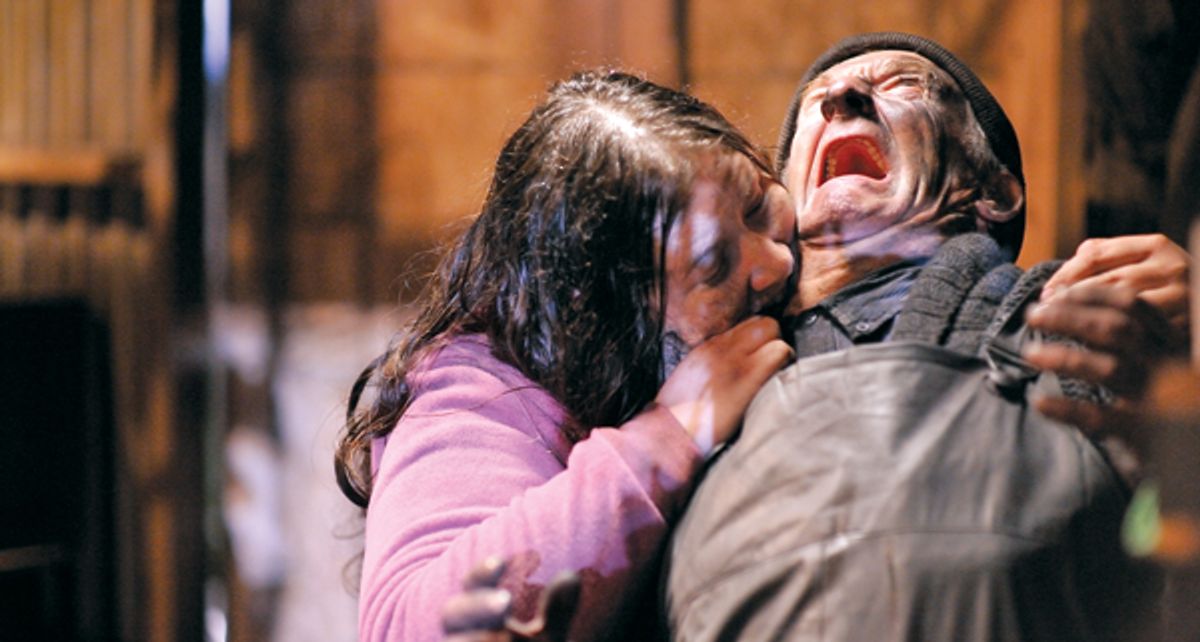 George Romero's "Survival of the Dead"
--

An amiable George Romero, the director of six (and counting) flesh-eating zombie movies, sat in the cramped studios of San Francisco modern rock station Live 105 as a line of his most devoted fans got the chance to ask him one question on the air. Among the living dead enthusiasts were a young woman with a decaying corpse tattooed on much of her thigh, another beauty with Betty Page bangs who dolled herself up in corpse paint, a guy who insisted that you had to watch all six "Saw" movies in one sitting to really understand them, and then there was me. Being a morning show contest winner isn't how I usually go about meeting filmmakers these days, but Romero is one of the few figures towering enough to reduce me to being the same slavering gore geek that I was during my freshman year of high school.

At 70 years old, Romero seemed bemused by the adulation still generated by his intestine-munching cadavers so many decades after he first unleashed them on the Pennsylvania countryside. When my big moment arrived, I asked Romero if he wished he'd been more like Walt Disney and trademarked the hell out of all things zombie following the success of "Night of the Living Dead" in 1968.

"I don't think you can trademark zombies, man," he said with a chuckle. "They were around long before I came along. They were always in the Caribbean. I just made them suburbanites."

But Romero did more for the walking dead than act as their real estate agent. He found them as folkloric boogeymen and left them as a contagious, flesh-eating metaphor for societal breakdown. Before "Night of the Living Dead," the concept of the dead rising, consuming the living and only being killed by a blow to the head, didn't exist at all. In the four-plus decades since that audacious, low-budget shocker, Romero's zombie apocalypse scenario has become as much a part of American culture as Ol' Walt's trademarked versions of Grimm's Fairy Tales. As for more traditional zombies, it's doubtful that flash mobs heeding the call of the Internet would be as driven to mill sugar cane like the undead from the 1932 Bela Lugosi vehicle "White Zombie" as they are to clamor for brains.

As zombies have ambled their way into other people's hit movies ("Zombieland"), bestselling books ("World War Z") and even Jane Austen's "Pride and Prejudice," Romero has become less reluctant to embrace his decomposing brainchildren as he was in the past. After completing his initial cycle of dead movies with "Land of the Dead" (2005), Romero launched a new zombie franchise with "Diary of the Dead" only two years later. This is lightning quickness for a director who took a decade to follow up "Night" with "Dawn of the Dead" (1978) and allowed 20 years to lapse in between "Day of the Dead" (1985) and "Land." And now, just three years after "Diary," we have "Survival of the Dead," which is getting a theatrical release on May 28, but has already been available via video-on-demand since April.

For his new series, Romero forgoes the budget-consuming undeadageddon of his earlier films and brings things back to the initial stages of a zombie outbreak. While "Diary of the Dead" sports some cool scenes of an Amish guy taking out zombies with a scythe or a heart defibrillator being used to fry a corpse's brain, its focus on a bunch of excruciating film school students who insist on posting the walking corpse carnage on YouTube was a misstep. Romero has always packed social satire into his horror, but his critique of new media fell flat, making "Diary" the zombie movie equivalent of that last televised Elvis concert where the King looked more bloated than usual and kept forgetting the words to his hits. If Romero had only made a movie about Amish guys decapitating ghouls with antique farming implements, he would have made the best movie ever. Sticking with the younger crowd made him seem out of touch despite their Wi-Fi connections.

In "Survival of the Dead," Romero wisely keeps things more archaic. This time the walking dead are dropped right into the middle of a Hatfield-McCoys-type feud on a small island off the coast of Delaware. Where it's evident that clannish hostilities have taken place on this islet for over a century, the arrival of the zombies has sparked off a holy war. The O'Flynns, led by a blarney-filled stereotype named Patrick (Kenneth Welsh), believe that the "dead should stay dead," where the Muldoons keep the zombies corralled in horse stables in the hopes that some day they can be cured of their penchant for cannibalism. It's basically the same conflict over euthanasia from HBO's Kevorkian biopic "You Don't Know Jack," only the afflicted are already dead, and way more people get eaten.

But before the movie can get all heavy with a message, a fire extinguisher is used to make a zombie's eyes pop out, still-living zombie heads are seen gasping on pikes, and a couple of national guard deserters find themselves swimming through a shallow harbor filled with snapping corpses. There's also a Chinese guy who fishes for zombies for no apparent reason. Fortunately he is quickly pushed into the harbor and consumed before any more ill-advised ethnic humor can ensue. Zombies also ride horses and are lassoed by cowboys. While there's definitely enough action to keep this horror flick moving along at a pretty good clip, I could have done with a little more of a "Red River"-type zombie cattle drive or perhaps even an undead rodeo.

"Survival of the Dead" is far from a return to Romero's 20th Century glories, but it does make for a nice little thrill ride nonetheless. You can certainly do worse in the realm of video-on-demand (and I should know), but you might want to make it to your local art house to see it during its theatrical run anyway. While major studios are happy to slam remakes of earlier Romero classics like "The Crazies" (2010) or "Dawn of the Dead" (2004) into wide release, who knows how much longer the maestro's more modest offerings will see the inside of a theater. That being said, Romero announced that he is planning two more zombie movies. Let's hope that one of them is about those Amish zombie ass kickers.