Does Obama feel the Gulf's pain?

Peggy Noonan says his presidency is doomed. Even Democrats want him to be more "emotional." This is getting silly 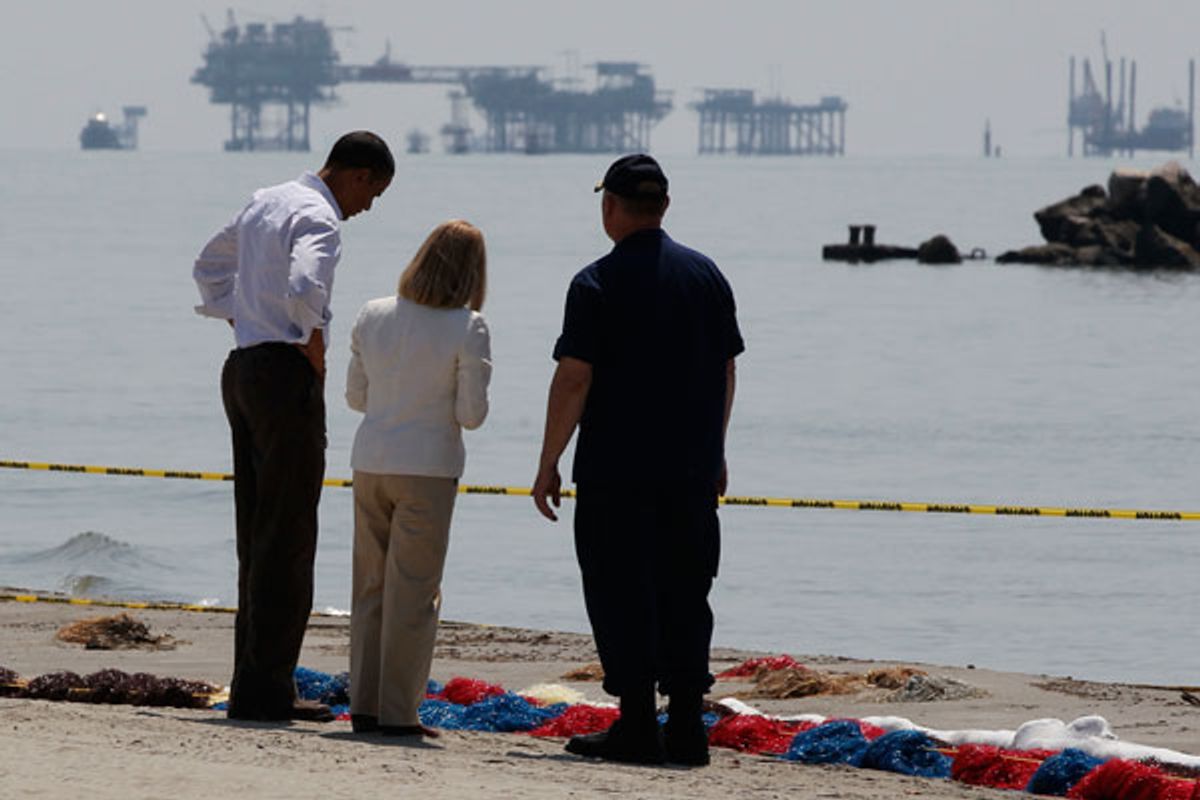 I've been struggling to understand the rage at President Obama about his handling of the British Petroleum disaster in the Gulf. I just haven't felt it. I don't see what more he can do, or could have done, to stop the continued oil leak or clean up the spill. So the anger, on right and left, seems strictly political, designed to benefit either one party — Republicans — or one particular point of view. From the left, it's that Obama is too cozy with corporate interests. And from Democrats in the region, like James Carville or Florida Sen. Bill Nelson, it's that the president hasn't made this his highest priority in the last 39 days. If I lived there, I might well share that feeling. That doesn't mean it's justified.

From cable television, 24/7, we're told that even if there's nothing more Obama and his administration could do to stop the leak and contain the damage, he's at fault because he's just not feeling our pain. On MSNBC Friday morning I watched former Rep. David Bonior, last seen peddling John Edwards to Democrats, complain about Obama's cool. "He's got to get emotional," the Democrat (who was there to balance the anti-Obama ranting of Pat Buchanan) insisted.

So Obama traveled to the Gulf today, to examine damaged beaches and wetlands, reassure the region, and emote a little. "I’m here to tell you that you’re not alone," the president told Gulf residents. "You will not be abandoned. You will not be left behind."

Will that be enough to stop the carping? Probably not. We're a silly people sometimes. Let me amend that: Our Beltway opinion makers, the folks the great Digby named "the Villagers," are a silly people. They want our president to be our daddy. They need Daddy to emote, to be a SNAP — a sensitive new age president. But also an angry, avenging daddy. (Maybe that's why Obama referenced his daughter Malia's worries about the Gulf, kind of weirdly in my opinion, in his Thursday press conference.)

The criticism from the right isn't surprising, and it isn't particularly hard to refute. The loopy Peggy Noonan wrote one of her loopiest columns of all time today, predicting that the oil spill will mark the end of Obama's presidency. But she loses her train of thought almost immediately. Americans aren't angriest about the oil spill, but about government spending and the government "gushing dollars," a tone-deaf metaphor while the Deepwater Horizon is still gushing oil. Noonan never really tells us exactly how the spill dooms Obama's presidency; she's hoping we'll be too caught up in her gauzy, fact-free prose to ask.

Predictably, Karl Rove says the crisis is "Obama's Katrina." It isn't. Sarah Palin, the Quitta from Wasilla, charged that Obama's handling of the spill reflects the "culture of buck-passing at the heart of this administration." The woman who only served half her term as Alaska governor is lecturing the president about responsibility. Hilarious.

The complaints from the left are a little harder to refute, but even there I see a frenzy to lay blame I don't entirely understand. Obama compromised his ability to stay untainted by the oil spill when he flip-flopped and endorsed opening up new areas to offshore oil drilling. Now he's not merely cleaning up the mess of the oil-friendly Bush-Cheney administration, but a mess that's a byproduct of drilling policies he supports. It's also inaccurate to blame the corruption of the Minerals Management Administration on Bush-Cheney appointees; Elizabeth Birnbaum, the leader who walked the plank Thursday, was appointed by his administration 11 months ago, and the corruption of the agency has been well-known for years. There's no evidence the Obama White House acted with any urgency to clean it up.

So I see reasons to lament Obama's change of policy on offshore drilling. But the current frenzy feels like piling on. I watched my friends Ed Schultz and the Huffington Post's Roy Sekoff go nuts on MSNBC Thursday, lumping together disappointments on healthcare reform and Wall Street with the president's actions in the Gulf. I don't see the comparison. The great Joe Romm of Climate Progress wrote on Salon Wednesday that there's really nothing more Obama can do to stop the spill. Calls for the military to take control ignore that the military has no expertise in handling this kind of catastrophe. Building floating barriers to protect the Louisiana coast and wetlands from contamination won't necessarily work — or it will work by dispersing the spill to the coasts of other states. Romm argues that the only opening for Obama is to use the crisis to make the case for a climate change bill that eases our reliance on fossil fuels — but that won't clean up this mess in the Gulf.

The real problem, for left, right and the media, is that it's easier to blame the White House and to criticize Obama's demeanor than to report on BP's role in the mess — the corner-cutting on safety in the lead-up to the Deepwater Horizon accident, and the company's woeful lack of preparedness for such a disaster. Of course, some media outlets have done great work: CBS's "60 Minutes," which showed that BP and rig-owner Transocean ignored evidence that the blowout preventer was itself blown out, when technicians found chunks of rubber from its sealant in drilling mud; this week, the New York Times' revelation that BP used the riskier of two choices to seal the well before the blast; just today, the Wall Street Journal, on the lack of preparedness by BP and for a crisis of this magnitude. But they're the exception.

On Sunday I'll be on ABC's "This Week" with my former Salon colleague Jake Tapper, discussing the oil spill, the non-bribe of Joe Sestak, the latest on "Don't Ask, Don't Tell" — and probably news we can't foresee yet.