Get your Ph.D. in Lady Gaga 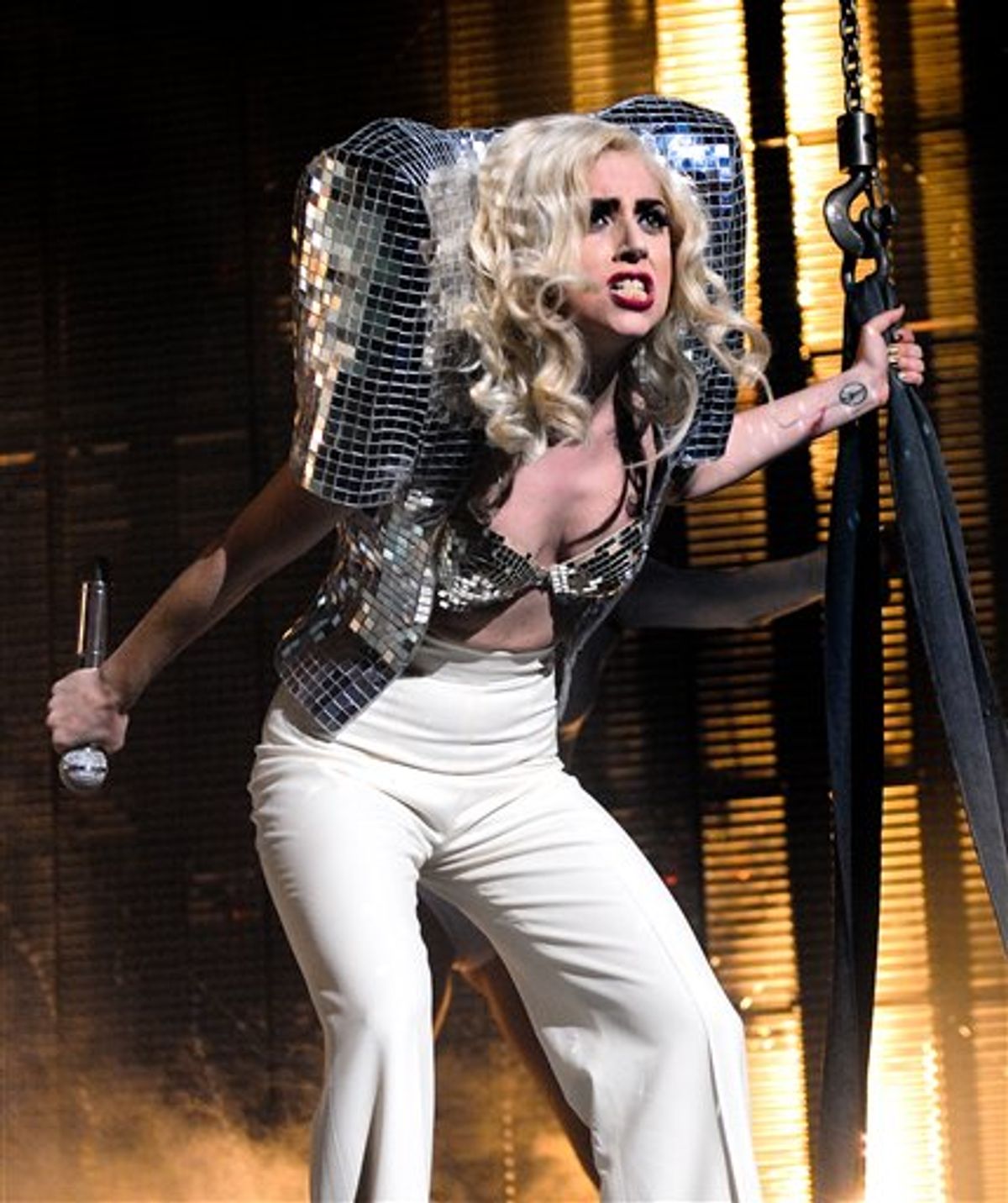 Sometime in 2008, the world entered the age of Lady Gaga. She seemed to spring from the Billboard charts fully formed, microphone in hand and razor-blade glasses at the ready. Details of her pre-Gaga biography began filtering out: Her birth name is Stefani Germanotta, she grew up in New York and dropped out of NYU. Anyone with an Internet connection can see YouTube clips of the days before she commanded the attention of music critics and clubgoers alike, and her outfits turned into something from Coco Chanel's nightmares. But the essence of Gaga remains mysterious: She is an enigma wrapped inside a glass-shard-studded suit, singing maddeningly catchy dance tunes about monsters. Perhaps it's this disconnection between the Gaga of 2010 and the videos of conventionally pretty Germanotta sweetly playing piano that has led to so many theories about her, ranging from intensive speculation about her sex life to critical analysis of her epic music videos.

So maybe it was only a matter of time before academia got in on the game. Meghan Vicks, a doctoral student working on her dissertation in comparative literature, wrote a critical breakdown of the "Telephone" video that earned her a nod from the Lady herself. Soon thereafter, Kate Durbin, a poet and performer who had been collecting exegeses about Gaga's work contacted Vicks to begin work on an online academic journal about Gaga. The site, Gaga Stigmata, is a collection of musings and art about Gaga, including submissions comparing the "Bad Romance" video to the work of Stanley Kubrick and a look at the legacy of Michael Jackson in Gaga's work. Salon e-mailed Vicks and Durbin to talk about Gaga as poseur, why we should care about her latest antics, and whether Gaga is just another Madonna knock-off, after all.

Why is Lady Gaga worth studying?

Durbin: Pop matters. What we hear in the mall, in our cars, on YouTube, makes the world around us, which is to say that it makes us. I believe Lady Gaga's art pioneers awareness and liberation at such a massive cultural scale that it would be ignorant, and potentially even destructive, not to take it seriously. We needed a pop star who could simultaneously celebrate the spirit of pop -- the spirit that makes everyone, no matter who or where they are in the world, stand up and start dancing when "Billie Jean" comes on the jukebox -- and deconstruct, and ultimately shift, the static notion of the pop star as a figure of blind worship and untouchable-ness. Gaga has put the glitter wand back into the hands of the audience. She's made the audience responsible for what they are viewing. No other pop singers are doing that, at least not on the level that Gaga is. No pop singer has done it on that level, ever, period.

Some people accuse Gaga of being a poseur, not a performance artist. How do you respond to them?

Vicks: When people dismiss Gaga's art as poseur-y, they miss the point of her project. Gaga's about faking fame, and she doesn’t claim to be genuine. I definitely find her performance to be consciously a pose. That's part of her goal: to demonstrate how powerful the artificiality is.

What distinguishes Gaga's work from that of other artists famous for their constant transformations and provocative costumes? Is she just a revamped Madonna?

Durbin: Gaga has so often been compared to Madonna, and wrongly dismissed as a Madonna clone. Both Gaga and Madonna are transformative artists, who have pushed the boundaries of how women are viewed sexually in pop culture. But unlike Madonna, Gaga makes her entire life a performance. For example, Gaga's outfits physically distort the female figure to the extreme, and she often wears clothing that's physically dangerous, grotesque and cyborg-esque. There's a combination of human and animal (such as her lobster hat, or her Hello Kitty gown), and of human and machine (such as her famous iPod glasses). Madonna always looked sexy no matter which period she was in. Gaga seems to be evolving toward something beyond sexy, to something polysexual and apocalyptic.

Vicks: If you look at the careers of other artist such as Bob Dylan, Madonna or David Bowie -- all famous for their constant transformations -- I think you'll find that their careers each have a number of personal genres or phases; they'll spend some time writing a certain style of music and performing an accompanying persona, and then they'll move on to a new style after a while. But Lady Gaga's transformations are all at once: she's a multiplicity of genres and styles and ideologies at the same time. The distinction is between performers like Dylan who embody a certain identity, and then transform into a new identity, versus performers like Gaga whose identity is embodied transformation.

Lady Gaga has inspired more academic readings of her work than other current pop stars. Why do you think that is?

Vicks: Part of it is the way that Gaga appropriates symbols and value systems for her act: Mickey Mouse, Star Wars, Americana, freemasonry, capitalism, consumerism, Quentin Tarantino, Stanley Kubrick, Michael Jackson, Madonna, Christianity, monarchy, Kermit the Frog, to name a few. Taken piecemeal, they totally contradict each other. But together, they create a cohesive picture of Gaga. She embodies a number of oppositions: sacred and profane, man and woman, sexy and horrifying. Her performances continually underscore her ambivalent nature; she can't be defined. She complicates categories of gender (masculine or feminine?), sex (does she have a dick, or not?), body (where does her body end and costume begin?), and human (is she human or monster, and is there a difference between the two?).

She also demonstrates the way fame functions; how we're obsessed with spectacle. Lady Gaga enjoys the benefits of being a pop star while simultaneously revealing those trappings to be poisonous, frivolous, murderous and fake. It's something that many conceptual artists do: they deconstruct ideology by too loudly chanting ideology's slogans, or too blatantly displaying its symbols. The beautiful pop star is at the same time a monster ("Bad Romance"); the disabled pop star turns her disability into a dance, into artistic movement ("Paparazzi"); or what is supposed to nourish both nourishes and destroys ("Telephone"). Gaga dressed up as a queen when she performed for Queen Elizabeth, and fashioned herself as Barbara Walters when she was interviewed by Ms. Walters herself. These official figures are thus brought face to face with a spectacle of themselves.

In the Atlantic, James Parker called Lady Gaga "the last pop star," because she destroys pop even as she creates it. Do you agree?

Durbin: I think Britney Spears was the last pop star, not Gaga. If anything, Spears' highly publicized descent represented the final fall into the void, a victim of the system. Britney and her shaved head wielding an umbrella at the paparazzi became a "monster"-- Gaga, on the other hand, is the pop star resurrected as a meta-pop star. Gaga said to an interviewer at CNN: "I am whoever you perceive me to be." She reflects back the things society projects onto pop stars. By drawing attention to her self-conscious performance of fame, she gives power to her audience.

Vicks: Deconstruction isn't about destruction, and it isn't about rendering everything meaningless. Gaga is engaging in a deconstructive performance of the pop star, but this doesn't amount to Gaga erasing the pop star. Rather, she demonstrates how fame is something created and costumed and declared, just like many aspects of contemporary identity. I think her performance is more of a commentary on contemporary society and the role of the spectacle therein, rather than a destroying of anything within that society. Lady Gaga doesn't announce the death of the pop star; she demonstrates the strength of the spectacle in our culture.