Why "Sex and the City" is bad for the gays

Mincing stereotypes, old cliches: How can a franchise created and beloved by gay men be so bad at portraying them? 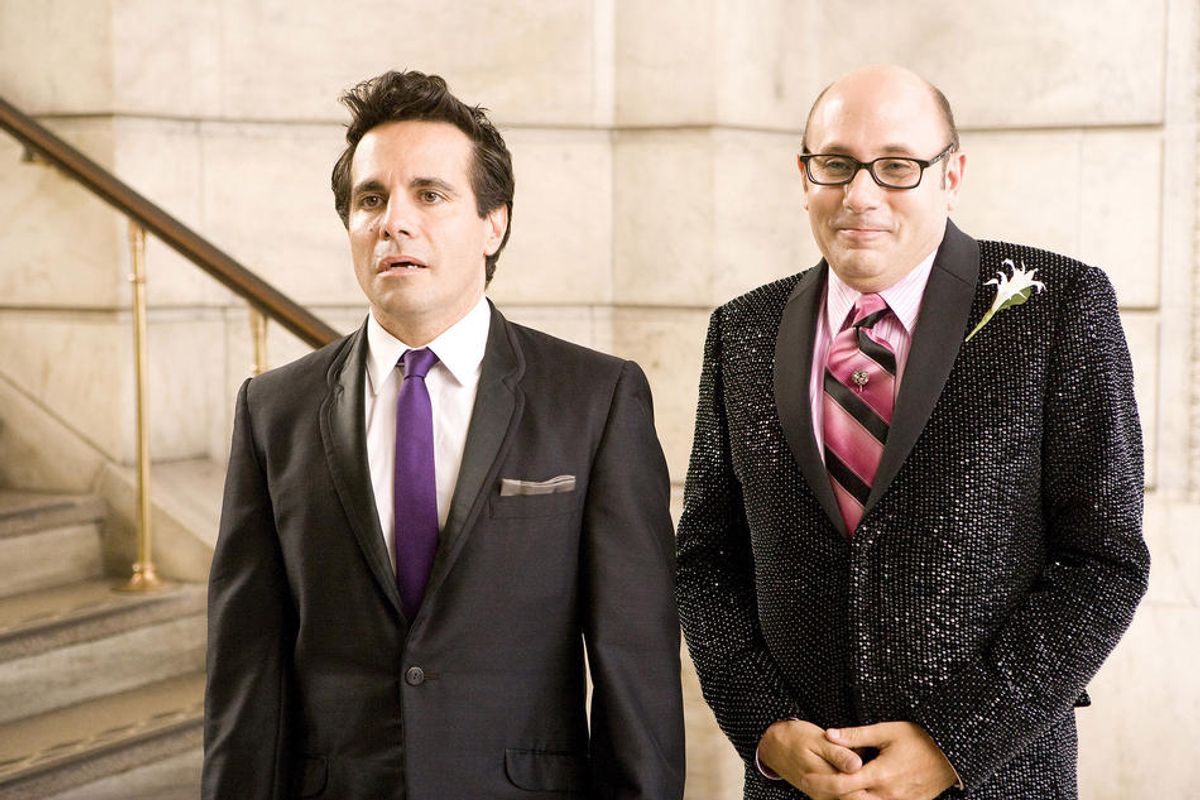 Mario Cantone and Willie Garson in "Sex and the City 2."
--

I like to think I'm not the kind of gay man who gets easily offended watching movies about gay people. These days, there's not that much to offend. Even frat-party celebrations like "The Hangover" are required to show some nuance and sensitivity toward gay characters and themes. But two movies in the past two years have made me genuinely angry, and the strange thing is, these two movies are aimed largely at gay men, beloved by gay men, and most surprisingly of all, made by gay men: "Sex and the City" and, now, its mind-blowingly tone-deaf sequel, "Sex and the City 2."

Part of what made the original HBO show so important was its ability to keep its finger on the pulse: From its relationship dilemmas to its frank sexual talk, the show prided itself on being hip and edgy. The movies, by contrast, are a testament to what happens when people lose touch. They feel insincere, overblown, transparently commercial -- and in the case of the recent sequel, brutally culturally insensitive. But most surprising of all, given the fact that both movies were written and directed by the openly gay Michael Patrick King, is how retrograde they are in their treatment of gayness.

The two main gay characters, Carrie's chubby pal Stanford (Willie Garson) and Charlotte's sassy BFF Anthony Marantino (played by Mario Cantone), are tragically asexual helpmates whose main role has always been to provide relationship advice to the show's straight female characters, fling bitchy quips, or let their flamboyant outfits serve as a visual punch line. Anthony, in particular, is the worst kind of shallow, fashion-grubbing gay minstrel. In the sequel, however, the pair finally get the dignity of their own storyline: They marry each other.

"Her best gay friend is marrying my best gay friend!" exclaims Charlotte, in the sequel's first scene, before Carrie adds, "Just when you thought everyone was too old to get married, here come the gays."

It's the clichéd, condescending hetero fantasy, the one in which you introduce the only two gay men you know, and magically, the sparks fly. If I had a dollar every time I met a woman who said, "Oh, you're gay? You should meet my gay friend," I could probably buy a plane ticket to Abu Dhabi (or, at the very least, Buffalo). And yet, in a movie that feigns to tackle the complexities of modern romance, all a gay man needs to do to find love is be placed in the general vicinity of another gay person -- even if he's as repellent as Mario Cantone.

Admittedly, when "Sex and the City" went on the air in 1998, the gay television landscape was vastly different. Characters like Will and Jack on NBC's "Will & Grace" had to be sexless and underdeveloped to make them palatable to nervous American audiences still getting used to the idea of two homos smack dab in the middle of must-see TV. Both those men existed primarily in the context of their female friendships, and, like Stanford and Anthony, had little to no romantic life, instead spending most of their screen time helping women untangle theirs.

But over the past decade, television portrayals of gay men have cracked open into something far more nuanced. Starting with "Queer as Folk" (with its near-explicit gay sex scenes) followed by "Six Feet Under" (with Michael C. Hall's troubled gay funeral home director) and "The Wire" (which dared to make its brilliant antihero, Omar, a gay man) and "Brothers and Sisters" (with troubled gay family member, Kevin Walker) and "Modern Family" (with its gay male adoptive family), gay men in television have become something much closer to flesh and blood -- with sex lives, personal dilemmas and, in some cases, children. (Though kissing is still verboten on "Modern Family.")

It's a change that parallels the way gay people have, in real life, become less and less troubled and defined by their sexuality (and has a precedent in the way black people stopped merely being the "hired help" of the films of the 1940s and '50s and took on complex personalities in film). But much like the female heroines' designer fetishes, the gay characters in "Sex and the City" are still trapped in some very glittery late-'90s amber.

Consider Stanford and Anthony's gay wedding. Held at a Connecticut country estate, the entire affair is more kitsched out than Liberace at a tinsel convention. There are swans, crystal-adorned everything, a chorus of gay men wearing sparkly, sparkly hats. The SATC girls say things like, "Could this wedding get any gayer?" Cue Liza Minnelli, who appears to perform a ceremony during which Stanford and Anthony call each other "broom" (a combination of "bride" and "groom"). Liza follows this up with her much-buzzed about Beyoncé "Single Ladies" cover, which perfectly encapsulates the mixture of misguided camp and pathos that plagues most of the film.

Of course, there's nothing wrong with a glitzy, kitschy wedding, or a gay man who loves fashion, but the problem is the fact that, in the "Sex and the City" universe, that's the only form of gayness that exists. The characters are stuck with a neutered marginality, a world bathed in sparkles and camp in which the term "broom" isn't considered offensive or infantilizing and Liza Minnelli still rules the discos. It's a culture, unbeknownst to many straight Americans, that has long since disappeared from the life of the vast majority of gay men. For people my age, who came of age in the '90s, the mainstreaming of gay culture meant pushing away from those clichéd ideas of gayness and finding new icons. Not Liza but Ellen. Not show tunes but indie rock.

During the early, taboo-shredding seasons of "Sex and the City," a common critique of the show was that the characters were really just gay men in drag, with their constant talk of casual promiscuity, rim jobs and "spunk." Openly gay creator Darren Star launched the show in the late '90s, pre-"Queer as Folk," when the idea of a premium cable show about the lives of gay men was still unthinkable, and it's perhaps inevitable that he would map his own experiences onto the stories of four candid women. Even today, Carrie, Miranda, Samantha and Charlotte make far more convincing gay men than Stanford and Anthony ever have. When Michael Patrick King joined the franchise, he, along with a staff of largely female writers, took care to make those four protagonists convincing visions of modern womanhood rather than mere cartoons -- but, ironically, that character shading was never afforded to the token gays who buzzed around the sidelines.

Sure, "Sex and the City 2" is an escapist romp not meant to be taken seriously. It's filled with pretty landscapes, extravagant fashion and lighthearted problems. But it's also poised to make massive bank on a holiday weekend (estimates have it overtaking its previous blockbuster box office). It's depressing to see such an antiquated vision of gay culture and relationships get such massive play. I know, I know -- a large number of the viewers will likely be gay men. For them, I offer a humble suggestion: If you're looking for a gay old time on Memorial Day weekend, Jake Gyllenhaal will be just a few theaters over, flexing his muscles in "Prince of Persia."