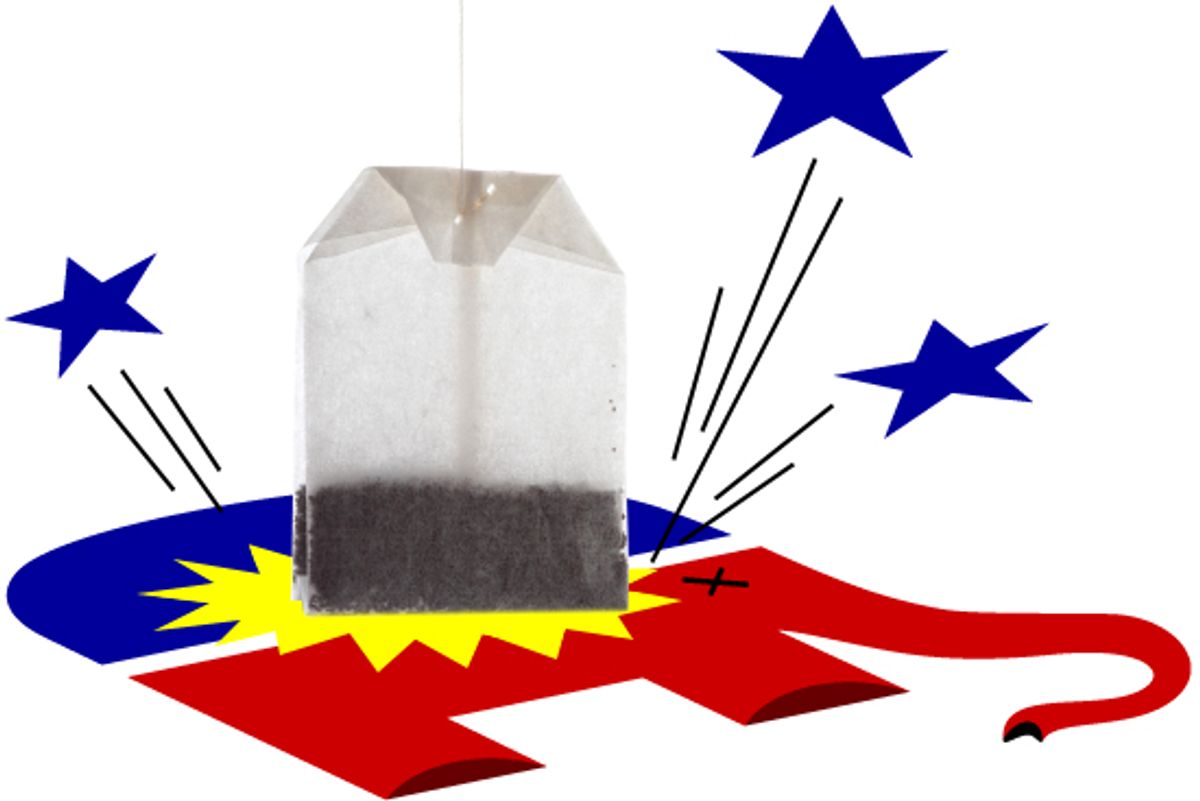 Don't get me wrong: Republicans are still on course to perform well in November's midterm elections. But it's starting to look like they'll leave some money on the table -- maybe a lot of it.

The reason is simple: The Tea Party movement -- also known as the GOP base -- isn't that interested in working with the Republican Party establishment. In one key race after another, this could result in the GOP fielding candidates in the fall who are ideologically pure but electorally deficient.

The prime example of this is in Kentucky, a conservative state that never much cared for Barack Obama in 2008 and that has turned even more sharply against him, and against the national Democratic Party, since his presidency began. This, coupled with the feeble economy and the basic buyer's remorse nature of midterm elections, should make the contest to replace retiring Sen. Jim Bunning a cakewalk for the GOP.

But it isn't, because the GOP base, in a revolt against a party establishment that it believes has betrayed conservative principles, opted for Rand Paul in the May 18 primary, instead of Trey Grayson, the establishment's choice. Within 24 hours, Paul was scrambling to prove to a national audience that he doesn't actually oppose the Civil Rights Act of 1964. He's now clammed up and shaken up his campaign staff, but Paul is an unseasoned candidate and a true believer. With more than five months to go until the election, further embarrassments seem inevitable.

Democrats, in other words, could end up stealing a Republican-held seat in a conservative state. The more controversial Paul becomes -- the more he becomes the main issue in the Kentucky race, instead of Obama, Washington Democrats and the economy -- the more conceivable it becomes that swing voters who are otherwise ready to vote against the Democrats will end up voting against Paul instead.

This, obviously, wouldn't have been the case if Grayson were the GOP nominee. In a year like 2010, with the national climate so favorable to their party, there's virtue for Republican candidates in being inconspicuous -- something that the bland, cookie-cutter Grayson would have had no trouble pulling off. Paul? Not so much.

This same basic dynamic -- the GOP base forcing the nomination of a deeply flawed candidate -- could end up playing out in as many as nine Senate battleground venues, potentially saving Democrats from an electoral drubbing.

Take Nevada, where Majority Leader Harry Reid should, by most historical measures, be a goner. His polling numbers are poisonous, his long-term incumbency and D.C. insider status are severe drags, and his state's independent voters seem eager to use the midterm to "send a message" to Obama.

But it's looking more and more like the GOP will nominate Sharron Angle, a far-right former assemblywoman who has the ardent backing of the Tea Party movement. Like Paul in Kentucky, Angle herself could easily become an issue in the fall campaign. Making the race a referendum on the GOP candidate is Reid's only hope. If Angle's his foe, he'll have a chance to do that.

Or there's Florida, where the GOP base's revolt against Charlie Crist has flushed the popular governor out of the party -- and into an independent Senate bid that is attracting significant Democratic support. If Crist prevails, there's now reason to believe he'll vote with Democrats to organize the Senate next year. And in California, the flaky Carly Fiorina has marginalized another Tea Party favorite and surged ahead of moderate Tom Campbell in the GOP primary. If she wins the nomination, Fiorina will face Barbara Boxer, whose popularity is now ominously low -- and who is surely grinning at the prospect of dodging Campbell.

The GOP base could also topple establishment favorites in primaries in Colorado, New Hampshire, Washington and Arizona -- ideological triumphs that would severely complicate GOP prospects in fall races that would otherwise be very winnable. And the party base's revolt in Pennsylvania last year, which prompted Arlen Specter to switch parties, has left the GOP with Pat Toomey, who faces an iffy fall campaign against Joe Sestak, who knocked off Specter in the primary.

Right now, Republicans need to pick up nine seats to draw even with the Democrats in the Senate (at which point Republicans could potentially win Joe Lieberman over) and ten to gain control of the chamber outright. The good news for them is that -- especially with this week's decision of Dino Rossi, an electable establishment favorite, to run for Patty Murray's seat in Washington -- there are (potentially) enough vulnerable Democratic incumbents to hit those numbers. And the national political climate only helps. The bad news is that just every time a Tea Party favorite wins a primary, it means the GOP won't be fielding his strongest fall candidate -- which could help Democrats claim seats they have no business winning in this environment.

This may be the biggest single difference between 2010 and the GOP revolution of 1994 -- which many Republicans believe they can replicate this fall. In '94, the party base was about as cranky and agitated as it now is; this is just how the right gets when it's denied White House and congressional control. But that anger was largely trained on Bill Clinton and the Democratic Congress. The GOP base generally trusted -- or at least was willing to work with -- its party's Washington establishment.

Not so in 2010. Now, the GOP base distrusts the establishment as much as it distrusts the Democrats. It's a consequence of 1994. As Salon's Gabriel Winant has noted, the election of a GOP Congress in '94 (and then a GOP president in 2000) fundamentally altered the base's expectations: It was time for the establishment to take all of its lip service to the base and put it into law.

But that, of course, didn't happen. Newt Gingrich backed off his confrontation with Bill Clinton in 1995, George W. Bush campaigned on "compassionate conservatism," and a Republican president and Congress spent the aughts expanding government and racking up massive debt.

No wonder that today, unlike 1994, the Republican base is unwilling to take the establishment at its word. The consequence is the proliferation of Tea party candidates -- a proliferation that might just save the Democratic Congress come November.