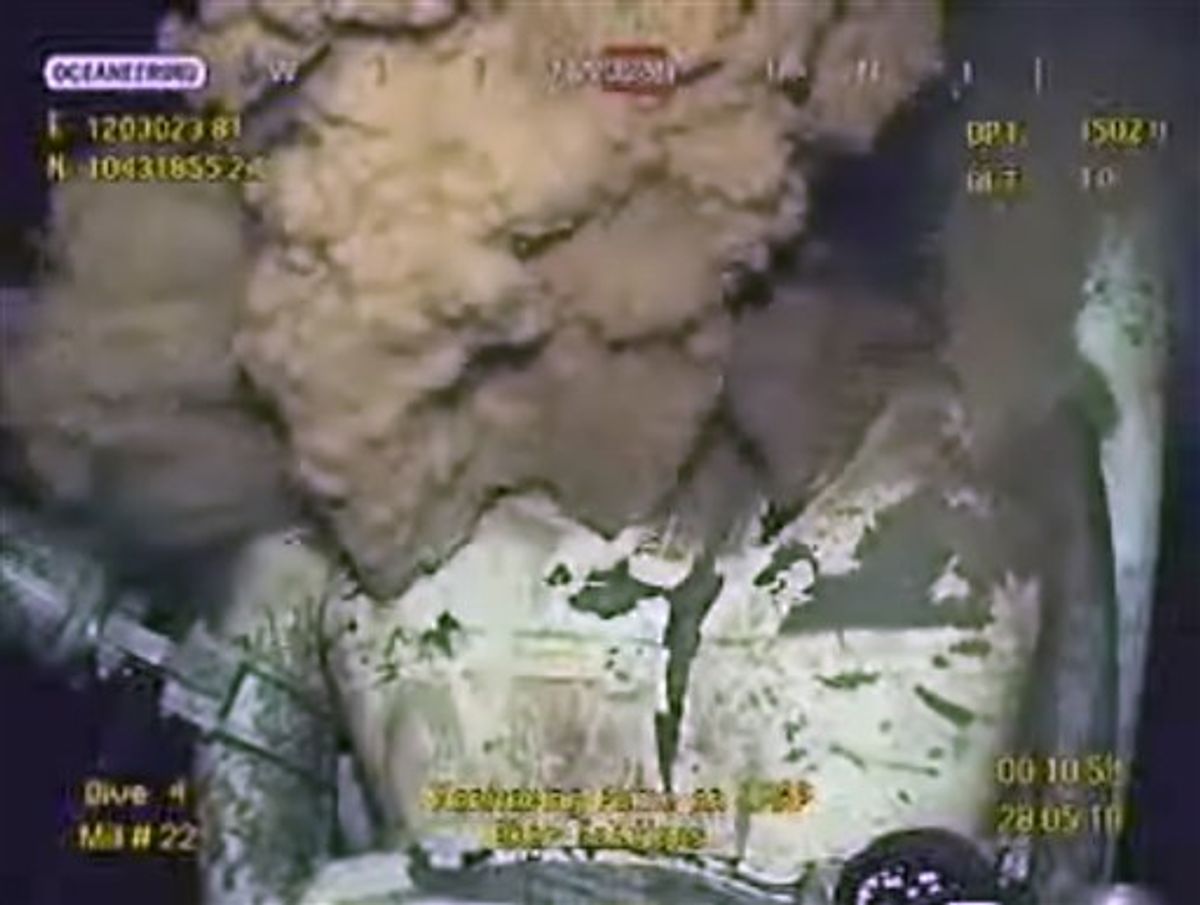 This image made from video released by British Petroleum (BP PLC) early Friday morning, May 28, 2010 shows drilling mud escaping from the broken pipe on the gushing oil well in the Gulf of Mexico. BP started pumping heavy mud into the leaking Gulf of Mexico well Wednesday and said everything was going as planned in the company's boldest attempt yet to plug the gusher that has spewed millions of gallons of oil over the last five weeks. (AP Photo/BP PLC) NO SALES (AP)
--

Marine scientists have discovered a massive new plume of what they believe to be oil deep beneath the Gulf of Mexico, stretching 22 miles from the leaking BP wellhead northeast toward an underwater canyon whose currents feed sealife in the waters off Florida.

The discovery by researchers on the University of South Florida College of Marine Science's Weatherbird II vessel is the second significant undersea plume reported since the Deepwater Horizon exploded on April 20. The find was announced Thursday.

The cloud was nearing a large underwater canyon whose currents fuel the foodchain in Gulf waters off Florida and could potentially wash the tiny plants and animals that feed larger organisms in a stew of toxic chemicals, another researcher said.

Larry McKinney, executive director of the Harte Research Institute for Gulf of Mexico Studies at Texas A&M University-Corpus Christi, said the DeSoto Canyon off the Florida Panhandle sends nutrient-rich water from the deep sea up to shallower waters.

McKinney said that in a best-case scenario, oil riding the current out of the canyon would rise close enough to the surface to be broken down by sunlight. But if the plume remains relatively intact, it could sweep down the west coast of Florida as a toxic soup as far as the Keys.

The thick plume was detected just beneath the surface down to about 3,300 feet and is more than 6 miles wide, said David Hollander, associate professor of chemical oceanography at USF.

Hollander said the team detected the thickest amount of hydrocarbons, likely from the oil spewing from the blown out well, at about 1,300 feet in the same spot on two separate days this week.

The discovery was important, he said, because it confirmed that the substance found in the water was not naturally occurring and that the plume was at its highest concentration in deeper waters. The researchers will use further testing to determine whether the hydrocarbons they found are the result of dispersants or the emulsification of oil as it traveled away from the well.

The first such plume detected by scientists stretched from the well southwest toward the open sea, but this new undersea oil cloud is headed miles inland into shallower waters where many fish and other species reproduce.

The researchers say they are worried these undersea plumes may be the result of the unprecedented use of chemical dispersants to break up the oil a mile undersea at the site of the leak.

Hollander said the oil they detected has dissolved into the water, and is no longer visible, leading to fears from researchers that the toxicity from the oil and dispersants could pose a big danger to fish larvae and creatures that filter the waters for food.

"There are two elements to it," Hollander said. "The plume reaching waters on the continental shelf could have a toxic effect on fish larvae, and we also may see a long term response as it cascades up the food web."

Dispersants contain surfactants, which are similar to dishwashing soap.

A Louisiana State University researcher who has studied their effects on marine life said that by breaking oil into small particles, surfactants make it easier for fish and other animals to soak up the oil's toxic chemicals. That can impair the animals' immune systems and cause reproductive problems.

"The oil's not at the surface, so it doesn't look so bad, but you have a situation where it's more available to fish," said Kevin Kleinow, a professor in LSU's school of veterinary medicine.