The unhealthiest restaurant chain in America

This company's most extreme dish has 2,500 calories and 85 grams of fat -- and it's not who you think it is 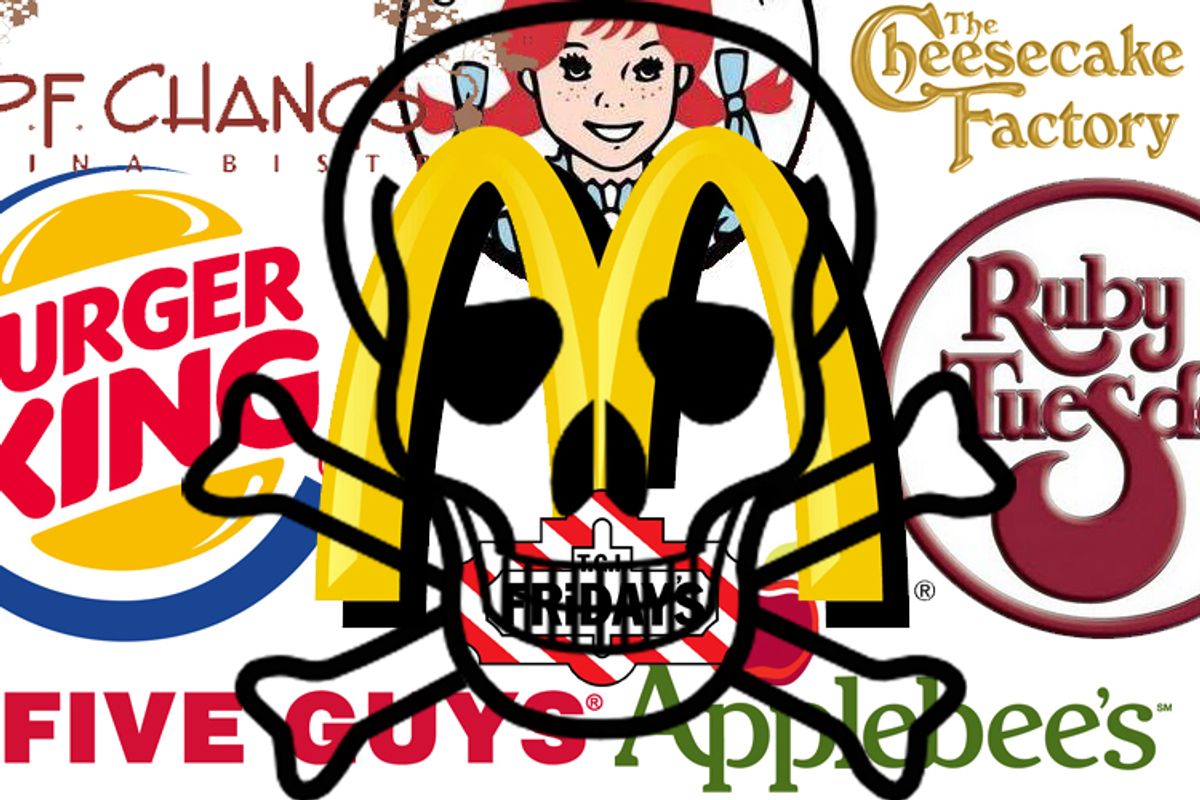 What's the fattiest, most heart attack-inducing dish you can get at a restaurant chain in America? It isn't KFC with its much-talked-about Double Down, or Burger King with its Triple Whopper, and it isn't even TGIF with its heavily loaded nachos. The most unhealthy restaurant chain dish in America is brought to you by the Cheesecake Factory.

According to the Center for Science in the Public Interest's Xtreme Eating Awards, which "reward" the American chain restaurant dishes with the highest calorie, fat and sodium counts, the Cheesecake Factory's Pasta Carbonara will saddle you with a heaving, gut-busting 2,500 calories and 85 grams of saturated fat. That's the fat equivalent of four days of heavy-duty meals. If that didn't shock you into swearing off the chain for at least a year, here's another analogy: Eating just one plate of Pasta Carbonara at the Cheesecake Factory is like eating five, yes, five Double Downs at KFC.

But there are other surprise winners. At California Pizza Kitchen, the innocuous sounding Pesto Cream Penne is worth 1,350 calories and a whopping 1,920 mg of sodium -- almost as much salt as you'd eat in an entire day. The Tostada Pizza, which sounds even healthier with its strips of lettuce, fresh tomato salsa and black beans, racks up an unbelievable 1,680 calories and 3,300 mg of sodium. Perhaps you'd like some unlimited Coke to go with all that sodium?

What's most striking about the Xtreme Eating Awards is not the calorie count itself -- we'd be fools to expect anything less in a land that throws up gems like Arizona's Heart Attack Grill -- it’s the way restaurants have managed to camouflage unhealthy meals as dishes that sound like paragons of healthful deliciousness. Most of us wouldn't touch a Quarter Pounder with a 10-foot-long fork, but wouldn't think much of eating P.F. Chang's Pan Fried Noodles instead (incidentally, 1,820 calories).

As the battle cries against obesity and overeating become shriller than ever, we've become adept at crucifying the most easily recognizable offenders -- red meat, fried chicken and sugary, fried foods. But our food education is woefully inadequate; many people still don't know what makes a meal genuinely healthy -- or that, for instance, a white-flour pasta slathered in cream sauce is just as bad as a plateful of cheesy fries.

With diners becoming increasingly calorie-conscious, more and more fast-food chains are promoting healthy alternatives on their menus. But as the Pasta Carbonara shows (described in Cheesecake Factory's menu as "spaghettini with smoked bacon, green peas and garlic-parmesan cream sauce"), what you perceive can sometimes be very far from what you eat.