"Neighbors From Hell": The perversion of the suburbs, unleashed!

In this animated comedy by "South Park" writer Pam Brady, demons discover that life on Earth is hell 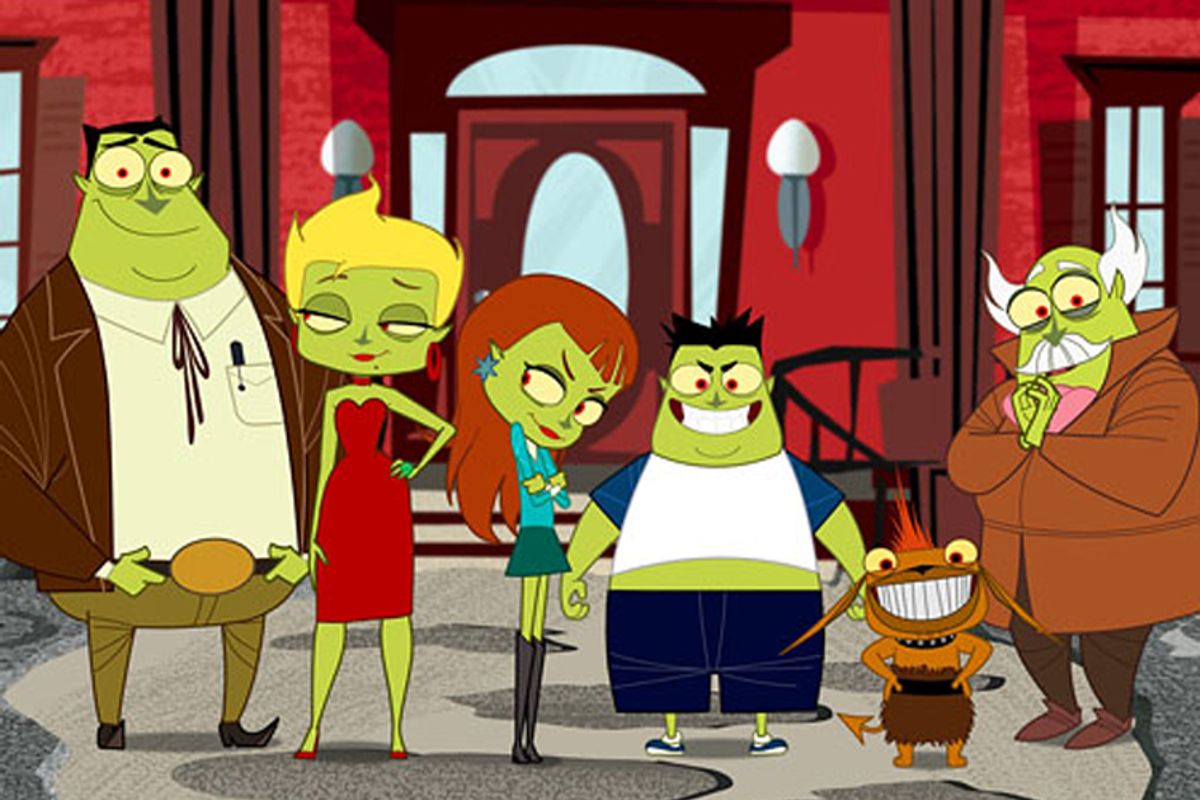 As young adults, we try to distinguish ourselves from the conformist herd. As old adults, we try to squelch our uniqueness just enough to keep our jobs and prevent our children from being ostracized by their peers for mumbling Kraftwerk lyrics to themselves at lunchtime.

But the irony of concealing that "carpe diem" tattoo on your ankle at the church picnic or turning down that growly Slint album in the elementary school parking lot is that such quirks of taste can't even touch the bizarre rituals and behaviors that pass for normal in mainstream America. From the aggressive displays of machismo at little league baseball games to the vaguely menacing etiquette of PTA meetings, the freakishness of suburban life far transcends the freakishness of ... well, freaks like you and me. Whether we're straining to appear unfazed by the oddly sexual undertones of songs at our kid's Christian day camp or struggling to stomach the fried delights of the local themed chain restaurant, it can be a challenge to remain unfazed by the madness around us.

"Seem normal, fit in." This is the mantra that the demon family in TBS's new animated comedy "Neighbors From Hell" (premieres 10 p.m. Monday, June 7) keeps repeating, but it could just as well be the goal of any eccentric family uncomfortably ensconced in the suburbs. Shocked and disturbed by what they find in their new home "topside" (as Satan calls Earth), Balthazor Hellman (Will Sasso) and his family can't go home to hell until Balthazor infiltrates a company called Petromundo and prevents it from completing a giant drill that can dig to the center of the Earth (where hell is). If Balthazor fails to stop the development of the drill, he'll spend eternity "staring at the inside of a Hellcon 5000 Soul Compactor," according to Satan.

No one in Balthazor's family is happy about their relocation to Earth ("Eww. That's where Ugg Boots come from," says the teenage daughter, Mandy). Least happy of all is Balthazor's wife, Tina (Molly Shannon), who's repulsed by the sight of the average human. She asks her husband, "How does one fit in with these dirty, stinking, filthy, wretched humans?" Balthazor suggests they study "Family Ties" and "The Cosby Show" for clues on how to behave, but it's going to take more work than that to fit in with odious humans like Marjoe Saint Sparks (Dina Waters), the Hellman's new neighbor. Marjoe, who sounds a little bit like a Southern version of Kristen Wiig's Target Lady from "Saturday Night Live," openly tongue-kisses her poodle Champers, whom she refers to as her "soul mate."

Along with its demented take on the purgatorial nature of the suburbs, "Neighbors From Hell" tackles the depravity of the corporate workplace, embodied most appropriately in Balthazor's boss, Don Killbride (Kurtwood Smith), who greets a roomful of employees by shouting, "Heads up, ass clowns!" Killbride gleefully recounts that Balthazor has been hired to replace a man who "was eating a Brunchables at his desk, and his heart exploded." When Balthazor explains that his co-worker got sick from bad cheese, his boss barks, "Monkey-loving cheese, probably from China. The only thing that country makes that can't kill you is their handguns."

Created by "South Park" writer Pam Brady, "Neighbors From Hell" offers that flavor of manic weirdness and disturbing punch lines that animated shows traffic in these days, lingering around the offensiveness level of FX's "Archer" but stopping just short of the potty humor of "Family Guy." But is it worth your while? Personally, I was on the fence up until the point where Balthazor takes his co-worker out to eat "small plates" at a pole-dancing-themed chain restaurant called Criss Angel's Mindfreak Tapas. Something in the way those two toss back "Freakatinis" while alterna-chicks spin around poles right by their booth captures the mainstreaming of perversion with breathtaking economy.

Should we really bother hiding our bongs and our foot fetishes and our love of Tupac Shakur? In a few years, every last one of our so-called alternative choices will be transformed into something soft and friendly and consumable for the masses anyway. Sooner or later, everything that was rare and special will either be commodified into mediocrity or revealed as just another skin-deep consumer choice that once masqueraded as something more soulful and mysterious. This is what American culture does: It normalizes that which is perverse and perverts that which is normal.

Or as Marjoe puts it to Tina, "I can't wait to go on a cruise with you!" See how even friendship can sound dirty in the suburbs? Welcome to hell, shipmates!