There's not much that Obama himself can do to "plug the hole." But he could be honest about why the spill happened 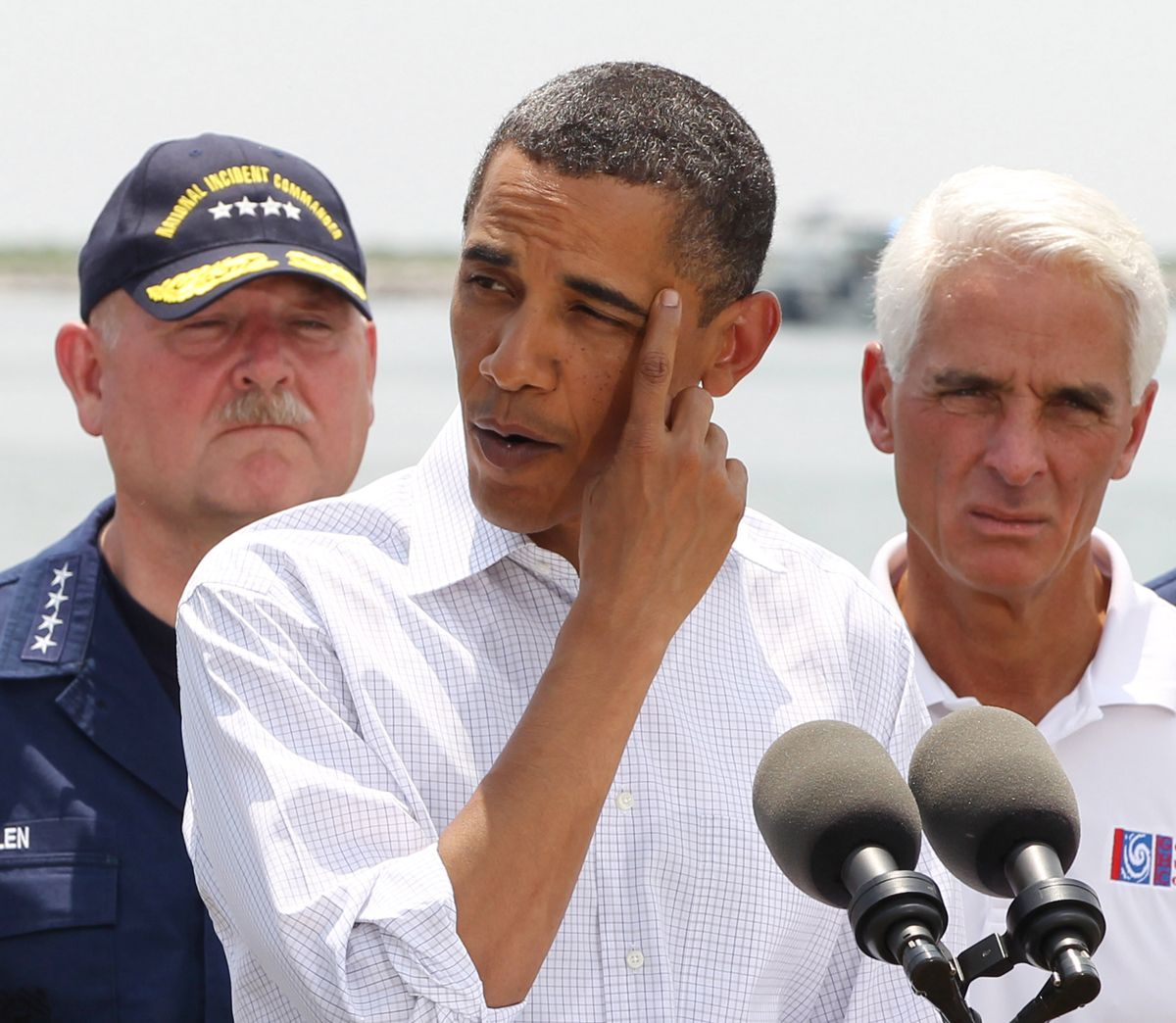 When I was shaving this morning, my daughter came up to me and asked, “Daddy, when is President Obama going to develop a coherent narrative for his administration?” OK, maybe not. She’s only 3, and her typical question is more along the lines of, “Can we play hide and seek?”

The president isn’t hiding, but I'm not certain that he is seeking, either. At the end of his buck-stops-here press conference on Thursday, he told a story about how he'd been shaving that morning when his 11-year-old daughter asked, "Did you plug the hole yet, Daddy?"

It's an odd question, since of all the things the most powerful man in the world has control over, plugging the oil leak in the Gulf isn't one of them. The federal government simply lacks the relevant equipment to address a volcano of oil one mile below the ocean. I would have thought that the president might have explained that to his daughter at some point. Apparently not.

Sure, no father wants to tell his child that he can't solve the biggest problem around, but the fact is that the oil companies are the only ones who do this kind of risky drilling — and the only ones who have the technology to stop it.

But it's also true that Big Oil has spent years deluding itself and others into thinking that this kind of spill was impossible and that preparing for one wasn't necessary. Indeed, BP once called a blowout disaster “inconceivable.” Certainly, if you can't conceive of a disaster, you'll become more and more lax, more and more reckless, until one happens. You’ll cut corners on backup systems and testing. And you certainly won't pre-build and pre-position any relevant equipment for staunching the flow. Since a disaster can't happen, you and your allies in Congress will block all serious safeguards and demagogue all efforts to oversee the industry as “Big Government interference in the marketplace that will raise the price of gasoline for average Americans.”

The administration has made some efforts to push back against Big Oil. In February 2009, Interior Secretary Ken Salazar canceled 77 oil and gas lease sales on Western lands that had been approved in the last days of the Bush administration as a final gift to Big Oil. The leases were for land near pristine places like Arches National Park and Dinosaur National Monument. As a result, Sens. Bob Bennett, R-Utah, and Lisa Murkowski, R-Alaska, blocked the confirmation of David Hayes, Obama’s choice to be deputy interior secretary, for two months. Hayes was on the scene on the second day of the Gulf disaster and has been a key figure helping to oversee the effort.

I suppose one can construct a scenario where the administration managed to prevent BP from drilling this well in the first place -- a mere two months after taking office and while Republicans were scheming to obstruct and block its moves. Short of that, though, it's clear that the blame for the disaster rests with BP, Big Oil, the Bush-Cheney administration (which larded the government with Big Oil stooges), and the industry’s strong-arm supporters in Congress (which enacted the voluntary, “trust us,” self-regulation we have today).

The president has failed to explain to the public how unbridled greed and self-regulation allowed the Goldman Sachses of the world to destroy the financial system, and with it the economy. Instead, people are angry at government for how it tried (and succeeded at) fixing the problem. He has failed in the same way when it comes to Big Oil.

As president, Obama bought into Big Oil's story that new technology meant that a big blowout disaster was impossible. And so he embraced offshore drilling a few months ago and even now has been slow to stop defending it. Thus, the questions that all Americans should be asking their president isn't whether he's plugged the leak yet. It's, "Why did you believe Big Oil and its right-wing allies?"

I guess the president has never told his daughter the story of how conservatives keep weakening all government regulation, how they demagogue any effort to oversee the private sector, and how when the inevitable disasters come, they blame the victim and demand to be put in charge.

But I can see why he wouldn’t tell that story to his daughter. It doesn’t end happily ever after.