First he was for bailouts, then we was against them. Now he's ready to prop up the oil industry at taxpayer expense 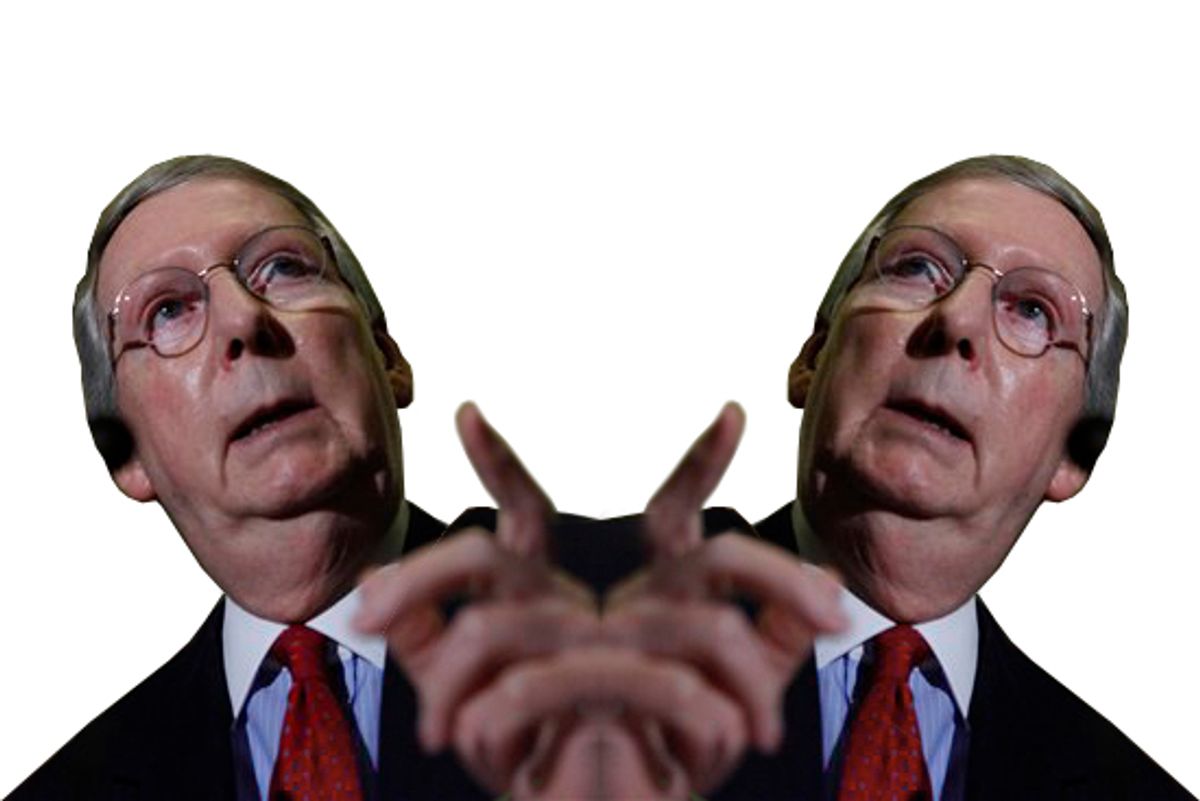 Based on John Kerry's 2004 declaration that "I actually did vote for the $87 billion before I voted against it," you could credibly argue that the Massachusetts Democrat is the founder of modern political flip-flopping -- the James Naismith of the political world's most dazzling sport. By that metric, though, you would also have to acknowledge that Kentucky Republican Sen. Mitch McConnell is the game's Michael Jordan.

As the upper chamber's GOP leader, McConnell backed the Wall Street bailout in 2008, calling it "one of the finest moments in the history of the Senate." A year and a half later, he was telling reporters that he vehemently opposes bailouts of big business.

Now, just weeks after that textbook "for-it-before-against-it" feat, McConnell and his Republican cohorts are leaping past the Kerry-inspired fundamentals. Determined to pull off an all-star caliber act of "for-it-against-it-for-it" acrobatics, the GOP is pushing a bailout for yet another big business: the oil industry.

True, we haven't heard that word -- "bailout" -- during the Gulf disaster, which the government calls the worst petroleum spill in U.S. history. But we have heard a lot about the oil industry's "liability cap" -- a term that is just another synonym for "bailout."

See, someone is going to bear the massive cost of damage to the Gulf Coast economy. The lost wages, sales and revenues will be borne by either A) fishermen, motel owners and other small businesses whose livelihoods are being choked in oil plumes, B) taxpayers whose cash would finance disaster aid and victims' benefits, or C) oil firms whose rig caused the catastrophe in the first place. In this particular calamity, a bailout would permit C to pass off major portions of the economic cost to A and B.

Which, of course, is precisely what existing liability caps are designed to do.

That's right, under current law, "Oil companies face unlimited liability for the cleanup costs of an offshore spill, but their liability for economic damages to affected communities is capped at $75 million," reports Congressional Quarterly.

Considering the fact that oil-spill costs can far surpass $75 million, this is the old "too big to fail" idea propping up the oil companies. Applied specifically to the Gulf cataclysm, the statute suggests that the national interest is best served by having taxpayers and communities foot the bill for the destruction rather than having companies like British Petroleum suffer the balance-sheet pain of paying the full damages.

In response, Democrats are proposing sensible new legislation to eliminate the cap and reaffirm the "polluter pays" principle. As President Obama's associate attorney general told Congress this week, "We don't think there should be an arbitrary cap on financial liability."

Yet, McConnell apparently does. Appearing on "Meet the Press," the Republican leader, who weeks ago railed on "guaranteed perpetual taxpayer bailouts," not only refused to support eliminating the liability cap, but warned of "the danger of taking the cap too high" -- in effect, opposing even moderately reducing the size of the bailouts that the cap inevitably creates.

Obviously, the GOP is trying to help its oil industry benefactors stall for time. As Sen. Bernie Sanders, I-Vt., said in chastising the obstructionism, "A year from now, the television cameras will be gone, and it will be a fisherman who's trying to file a claim and he's going to be by himself," with no means of redress.

That's the Republicans' unfortunate goal, and because of the GOP's intransigence, prospects for the Democrats' legislation remain cloudy. What's clear, however, is McConnell's place in the Flip-Flopping Hall of Fame. His spectacular contortions have earned him a hallowed spot in the building's brand new Bailout Wing.