In the mood for a little love this summer? A romance fiction expert picks her favorite new books 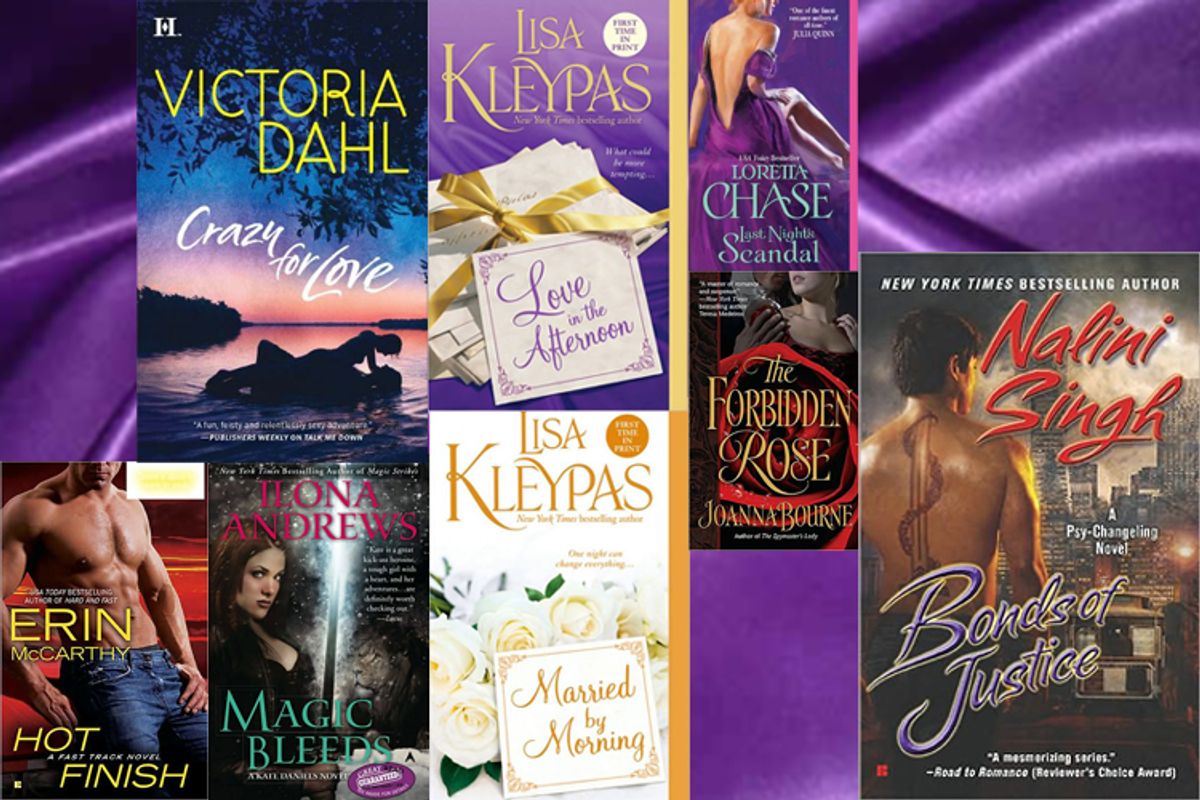 Even if you're not at the beach or anywhere near sandy relaxation, a great romance novel can provide the perfect escape from everyday stress. The best part of romance fiction is that happy endings are guaranteed. While the perfect tan requires careful sunscreen, enjoying a romance requires only two things: a belief that everyone deserves a happily-ever-after, and the ability to ignore anyone who sniffs at your choice of reading material. A good romance novel is like the perfect day at the beach: wonderful and restorative from start to finish.

Allow me to help take some of the risk out of summer book shopping, courtesy of some of the best writers in the romance genre. I divided the list into three helpful categories: the long-ago, the here-and-now, and could-be-today-with-creepy-things, so take your pick.


Once Upon a Time: stories that take place in the past

Part spy adventure, part love story, part French, part English, and all parts wickedly well written, this is a perfect read for when you've got hours and don't mind being unable to put a book down. Set during the French Revolution, when being royalty is one whisper away from being decapitated, the novel focuses on two people who under normal circumstances would never have met. William Doyle is a master of disguises and lies, and Marguerite de Fleurignac's secrets are the last thing she holds on to after everything else in her life was burned away. The two of them must get to safety without anyone betraying Marguerite as an aristocrat or Doyle as a spy, and without revealing anything to one another -- which doesn't go at all well in one scene when he has to hide her ... and she's stark naked. Bourne is a magnificent writer. If she were a chef, you'd eat slowly to enjoy each bite. With her books, you savor every word.

This recommendation comes to me from fellow reviewer Kristie Jenner, who writes Ramblings on Romance and adores Lisa Kleypas' books. I can't question Kristie's judgment: Kleypas is a master at writing books that combine the fairy-tale patina of historical romances set in the British Regency era with characters who suffer for their differences and the ways in which they don't always fit in. In "Married by Morning," Leo Hathaway finds out he must marry to keep his family's fortune and his new and unexpected viscountcy. The only woman he wants to marry is the one who cannot stand him: Catherine Marks, who has lived with his family as companion to his sisters and has made him demented with her contrary opinions and her inability to recognize his brilliant perfection. Catherine is hiding a few tormenting skeletons in her closet, and Leo has to not only convince her to marry him, but also convince her to trust him with her secrets.

In "Love in the Afternoon," Beatrix Hathaway, the youngest of the Hathaway family, prefers animals and trees to the complex and sometimes cruel expectations of other people. Beatrix tries to help her friend Prudence by composing Prudence's letters to her fiancé Christopher, Beatrix finds herself corresponding with a soldier in the Crimean War who understands her better than anyone else. When Christopher comes home a war hero, and wants nothing but to marry his fiancée, Beatrix has to either confess that her masquerade was really the truth, or give up a man she loves and remain hidden behind her eccentricities.

Loretta Chase books are the ones savvy romance fans recommend to their romance-dismissing friends to explain that, contrary to standard perception, romance is freaking awesome. Chase is freaking awesome. Her characters are nuanced and their dialogue is clever and sharp -- and her stories undermine every dismissive remark directed at the romance genre. This book, her latest, is touching and spicy and charming and unabashedly delicious. Olivia is adventurous, cunning, clever, and completely in love with her friend Lisle, who has spent years in Egypt while recovering artifacts on archaeological expeditions. Lisle wants to return to Egypt, but his family forces him to stay -- until Olivia comes up with a plan to satisfy almost everyone. If Olivia's plan succeeds, Lisle will return to his sandy digging after solving a mystery in a damp, decrepit, dark and utterly not-Egyptian castle in Scotland. If, that is, he can bring himself to leave her behind again.

"Exclusively Yours" by Shannon Stacey (June 2010)

This book will be available digitally from Carina Press, Harlequin's new digital-only line, so those of you who tote your Kindle, Nook, Kobo, Sony or smart phone to the pool, make sure this book is loaded up and ready to read. A reclusive author named Joe finds himself in a battle of wits with his high school flame Keri, who has been told to get an interview with him, or get a new job. Joe tricks Keri into spending two weeks in the woods with his family in exchange for the interview, and while there are some topics that are off-limits, their past won't let them avoid each other, particularly with the chemistry that remains between them. Stacey's writing is sharp and sexy and this second-chance story is perfectly hilarious -- and there's ATVs, mud, bug-spray and s'mores. Really. There's nothing more romantic than s'mores. I enjoyed this book so much if it were printed on paper I'd hit people with it until they read it.

A hot and funny story about a woman many of us can relate to -- you know, if you've ever been dumped and publicly humiliated, and then become the subject of nonstop paparazzi attention. Chloe Turner's fiancé faked his own death in a plane crash -- and when he was found, he told everyone he did it to avoid marrying her. Cue everyone who's ever had a grudge against Chloe to step into the spotlight, driving the media into Bridezilla hunting mode and driving Chloe to a deserted island vacation with her best friend. Then she meets a fortune hunter named Max who thinks, after years of dating high-maintenance complex women who needed his help, he's finally met an uncomplicated woman with a simple life. Cue the cameramen hiding in the dunes -- and cataclysmic hilarity.

This is the third book in McCarthy's Fast Track series about stock car racing, and holy carburetors, these books are hot. The first two, "Flat Out Sexy" and "Hard and Fast," are equally as good, and worth picking up before you read this one, but not a requirement. I read this book on my commute on the bus and, I kid you not, I laughed so hard people were staring at me. Suzanne Jefferson is broke, and starting over as a wedding planner two years after her divorce from racing driver Ryder Jefferson. As she battles the dimmest bride in the world and finds out her ex-husband isn't so much her ex, Suzanne will crack you up and make you root for a happy ending with Ryder. This book is hilarious, emotional and, frankly, so freaking sexy you won't believe it. You'll need SPF 45 sunscreen for your sunglasses.


Bump in the Night: stories with a supernatural twist

Paranormal romance is hugely popular right now, and for the best of what's coming out this summer, I turned to my friend Angela James who always recommends books I've adored.

Recommending a book that's part of a series-in-progress is always tricky, but this book has received some seriously high praise from review publications and my fellow readers, which means I may start at the beginning with "Magic Bites" and read all four this summer in one long supernatural reading spree. Kate Daniels is a mercenary who deals with magical creatures in a version of Atlanta that suffers from magical fluctuations of power, has way too many creatures and, fortunately for Kate, no limit to the number of people and not-quite-people who need her services. The series combines paranormal, urban fantasy, mystery and a slow-growing romance so there's something here for everybody. Plus, Kate has a sword. What could be more badass than a heroine kicking bad guy tail with a sword?

Singh's Psy-Changeling series is pure excellence. When you read paranormal and urban fantasy, you want to be scared out of your wits in an environment that's both familiar and foreign: a world you know overlaid with an otherworld that exists alongside everything familiar. Angela loves the Psy series because it features strong heroines, tough heroes, impossible relationships and truly terrible villains -- and a world so well-written you immerse yourself in it easily. The Psy are emotionless beings with varying levels of psychic powers who exist at odds and on the edge of all-out war with the Changelings, who take both human and animal form. The battle between their cultures is underscored by continuing examination of the value of touch, emotion and connection. Singh's other series, the "Angel" series, is also exceptionally good -- and holy smokin' sexy. You could fill a beach bag with Singh's books and sit on the sand reading from now until September and it would be worth the sunburn.

Through June, July and August, I'm hosting a summer book club featuring the best of romance at Smart Bitches Trashy Books, so if some of these books tickle your beach bag, I have plenty more to share with you. I hope wherever you're going this summer, whether it's down the shore or out to your backyard, you have a fabulous summer. Happy reading! (And don't forget the sunscreen!)