If Harry Reid loses this November, Senate Democrats will need a new leader -- and the battle has already begun 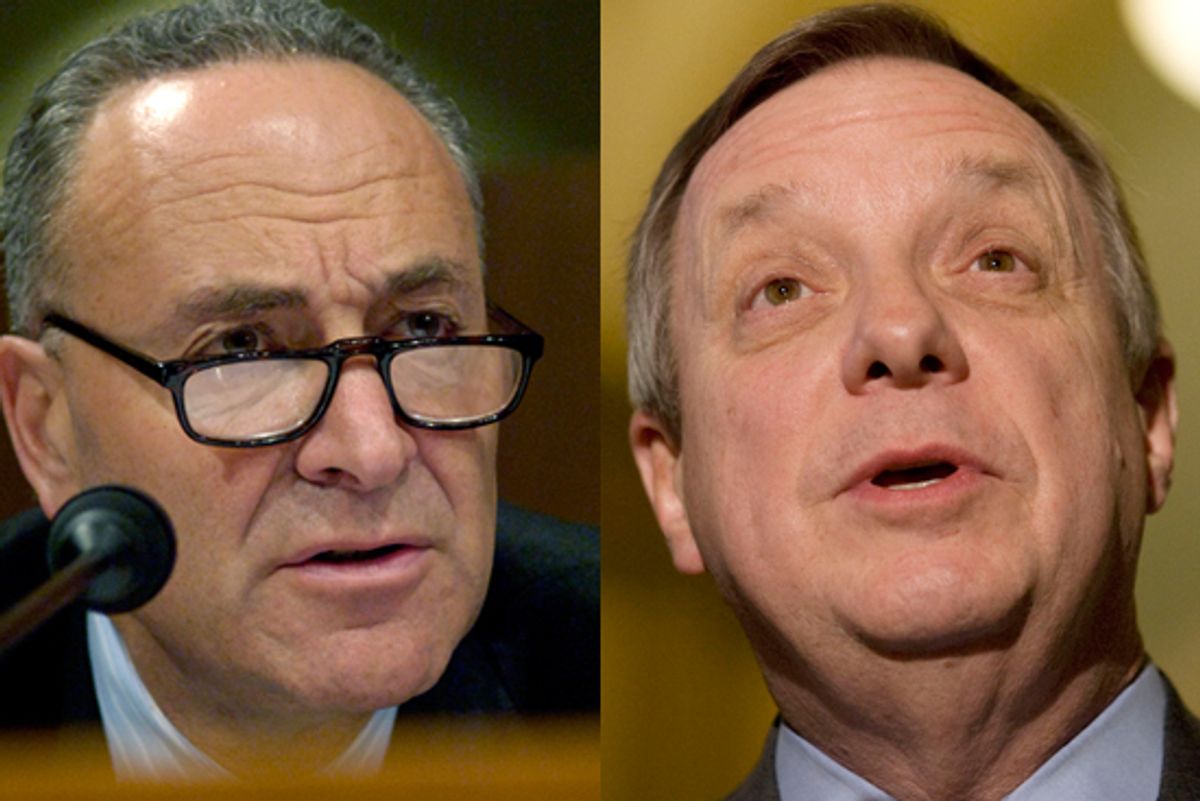 There's a very real possibility that Harry Reid will lose his reelection fight in Nevada -- which means there's a very real possibility that Senate Democrats will be choosing a new leader after November. In fact, a highly unofficial and very under-the-radar race to succeed Reid is already underway, featuring the hard-charging Chuck Schumer and the more mild-mannered Richard Durbin. Almost no one believes there'll be room for a third candidate.

It's notoriously difficult to predict the outcome of congressional elections, which are draped in mystery, with members intensely skittish about discussing internal matters in public. Personal relationships -- friendships and grudges -- that are invisible to or misunderstood by the public also loom large.

Still, it's not impossible to handicap the Schumer-Durbin race. There are four major factors that should be crucial in determining the winner:

Freshmen allegiances. Chuck Schumer’s best asset may be his personal connection to the 17 members elected in the last two 2008 and 2006 election cycles, when he was running the Democratic Senatorial Campaign Committee. After this year's elections, these freshmen should make up nearly one-third of the Democratic caucus.

It's important to understand the nature of Schumer’s DSCC work. He personally recruited all of the Democrats elected in '08 and '06, and he stood with them through all of the ups and downs of their often-brutal months-long campaigns. In other words, he formed meaningful bonds with them long before they reached Washington -- bonds that could garner Schumer great support in a caucus vote.

Precedent is on Schumer's side in relying on the backing of younger members. In 1988, Maine's George Mitchell became majority leader in large part because of the strong support he received from that 11-member freshmen class -- a group he became close to from his prior stint as head of the DSCC. Having a base of younger caucus members is a formidable building block, and Schumer could potentially garner around half the votes he would need to achieve a caucus majority just from this group.

A jittery post-midterm caucus. The timing of the Schumer-Durbin vote would also play an important role. Leadership elections are held a few weeks after the midterms, and Democrats are today staring at almost-certain Senate losses -- possibly significant losses. The mood in the ornate Capitol room where the Democratic caucus convenes will likely be sullen, downcast and probably a little testy. Surviving senators will be searching for explanations for their diminished political status, and much of the blame will be assessed to the vanquished Reid.

In selling himself, just as Mitchell did, Schumer can point to the gains the party made while he was head of the DSCC. He can also market his hyper-aggressive style as a welcome alternative to Reid’s vexing, taciturn approach.

For his part, Durbin has been making moves designed to bolster his standing as a partisan fighter. He was harshly critical of Kentucky Sen. Jim Bunning’s filibuster of an unemployment benefits bill, and later endorsed legislation sponsored by Sen. Tom Harkin of Iowa that would dismantle the filibuster, a popular cause with the party's frustrated progressive base. Durbin even created a website with a petition to ban the filibuster. (Perhaps as a counter to this, Schumer recently held Rules Committee hearings on the tactic.)

The problem for Durbin is that if Democrats are coming off a rough midterm, Schumer's hyper-aggressive, hard-edged style figures to be more attractive to senators, many of whom will crave wholesale change in the nature of their leadership.

The Obama factor. Durbin’s close friendship with President Obama, his fellow Illinoisan, might not be very helpful if Democrats are emerging from a midterm drubbing. History speaks to this. After Democrats lost their majority in 1994, the race to replace Mitchell was driven by senators' desire to chart their own political course, independent of Bill Clinton's White House. Both candidates to replace Mitchell, Chris Doff and Tom Daschle, pledged to assert greater control over the Senate’s agenda and message. If Senate Democrats react to significant midterm election losses with similar demands for autonomy, Durbin could be in trouble.

It's also important to understand that members of Congress -- particularly on the Senate side -- tend to treat leadership votes as sacred affairs. When Mitchell was elected in '88, one Democrat likened the process to a vote of the College of Cardinals, an insular event shielded from outside influences. Thus, Obama would potentially be constrained from twisting arms on Durbin's behalf.

Senior members. Here is where Durbin might find considerable support. The senators naturally predisposed to back the whip will be quieter, more cautious members who feel uneasy with Schumer’s insatiable appetite for publicity and partisan combat. Committee chairmen, too, might be hesitant to back Schumer because he could be viewed as a more hands-on leader -- someone who could potentially threaten the old bulls' grip on their gavels (and thus their power in Washington).

Other factors are also worth mentioning. For instance, Durbin could raise concerns among liberals that Schumer is too close to Wall Street, an accusation the New Yorker is sensitive to. Not coincidentally, Schumer’s current support of financial reform seems geared toward distancing himself from his state’s top industry and many of his financial patrons.

And then there's money. Like all senators who aspire to leadership, Schumer and Durbin have spent years greasing their colleagues with cash from their political action committees. Overall, they've invested similar amounts. But Durbin has given considerably more to Sens. Max Baucus, Mary Landrieu, Tom Carper, Russ Feingold and Al Franken, while Schumer has been more generous to Amy Klobuchar, Carl Levin, Mark Pryor and Ron Wyden.

Ultimately, of course, personal relationships loom as the biggest x-factor in the race. And because so many grudges and loyalties are unknown, it's impossible to craft a fully accurate picture of how the vote might break. But with the above guide in mind, we can still construct an intuitive, if highly speculative, whip count. Here's how things look for now.

(Note: Some of these senators are up for reelection and may lose this November, in which case they will not be able to vote in the leader's race. Additionally, this list presumes that Richard Blumenthal -- who is still leading his Republican opponent by 20 points in Connecticut -- will be elected this fall. Other Democrats, like Joe Sestak in Pennsylvania and Jack Conway in Kentucky, could win open seats this November but are not included in this count.)

Senators who could be put off by Schumer's style: Carper, Feingold, Landrieu, Tim Johnson and Herb Kohl.

Senators who could be swayed by the White House: Michael Bennet and Claire McCaskill.

Again, November's election could cost a chunk of these senators their jobs, thereby altering this math. For now, though, Schumer is about five votes shy of his goal. Perhaps the most telling statistic is that of Durbin's 16 logical supporters, only three have been elected in the last 10 years; conversely, 17 of the 19 members elected in the last four electoral cycles expected to return in 2011 seem more likely to back Schumer. This generation gap is what makes Schumer the early favorite.