BP's move didn't stop the oil leak. Does anyone think Plan B will work? Plus: I'm on ABC's "This Week" Sunday 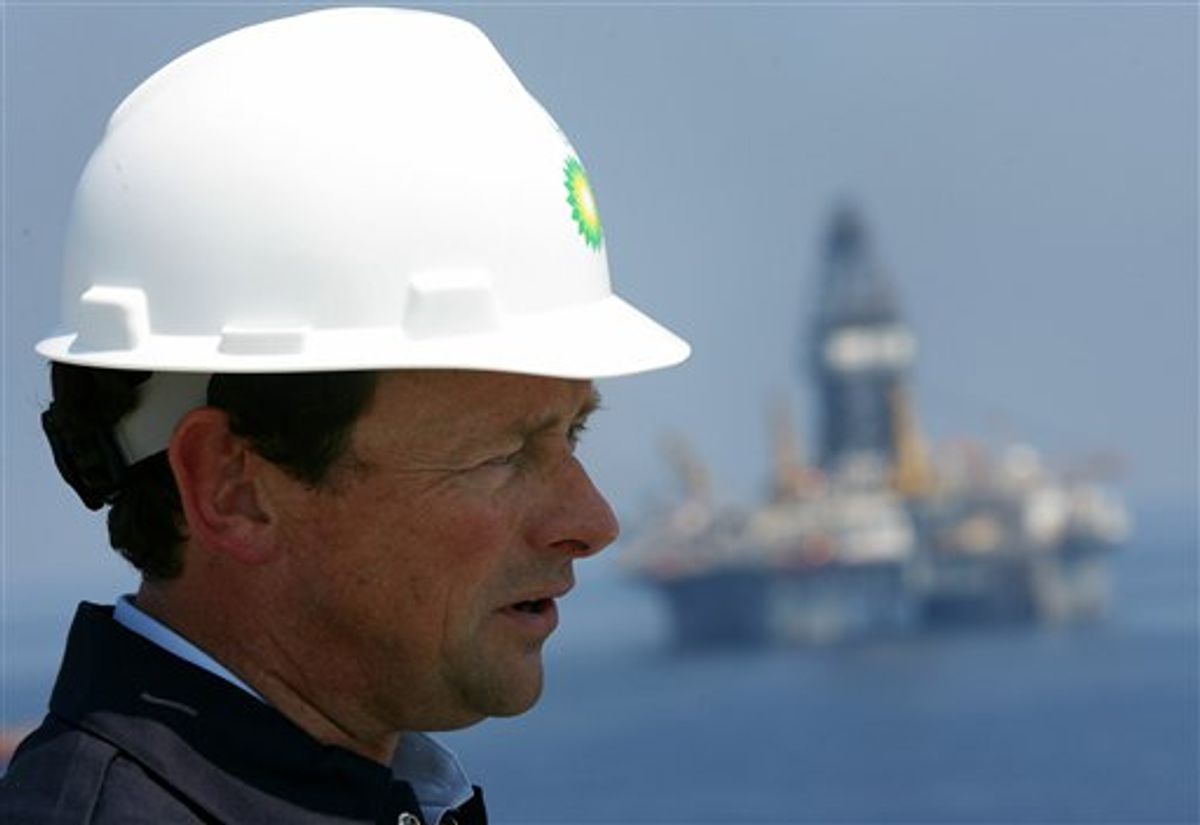 I was a captive audience Saturday afternoon, flying from San Francisco to Washington D.C., as BP chief operating officer Doug Suttles delivered the grim news that the company's "Top Kill" solution failed to contain the spill. BP has been dodgy about the effectiveness of the maneuver since it began. For the first two days, Coast Guard Admiral Thad Allen went out and said things looked good in the morning; Suttles or CEO Tony Hayward would then equivocate in the afternoon. All day Saturday it was clear the measure wasn't working, so I guess it was a good thing when BP admitted it.

But it didn't feel like a good thing. CNN broadcast Suttles' statement on a split-screen with the "spill-cam," showing the underwater site spewing its angry gunk, blacker than it has been for the last two days. It was very hard to watch without wincing.

And now what? Well, technically BP has a Plan B: To build a "lower-marine riser package," that could capture “a great majority” of the oil gushing from the well, Suttles said. This is on top of the "Top Hat" solution BP used a few weeks ago (which has a bit in common with what reporters are now calling the LMRP). And "Top Kill" used a "Junk Shot" that didn't work, either. The more the company rolls out silly-named options, the less anyone can have confidence that any of them will work.

I got a lot of interesting responses to my "Does Obama feel the Gulf's pain?" from last night. Some really great readers/writers, most notably CathyLa, helped me see why people are demanding that Obama do more. I reached my own "aha" moment Saturday, when "Top Kill" failed, and it became crystal clear BP doesn't know what it is doing. I'm still not sure ragging at Obama is the answer, but it's clear the president is going to have to play a bigger role in solving this problem, because BP is utterly incompetent here.

In the long run, we can and must have some good debate about the way the anti-regulation politics of the last 10-20 years led us here. Actually, there's nothing to debate. It's fact. Sure, it was worst under President Bush, but it also picked up steam under President Clinton, the Third Way Dem who was trying to carve out a new, narrow path between what he saw as the excesses of big government liberals and anti-government conservatives. On the bank reform crisis front, Clinton has admitted that he went to far with his deregulatory zeal. I think BP will be the Goldman Sachs of this scandal, the firm that wakes us up to the treachery of offshore drilling. Like Goldman Sachs, BP produced a product that was too complicated for anyone to understand, let alone regulate – in this case, drilling 18,000 feet under the sea – but one that looked like it would gush money forever. And if it didn't? In the last 30 years or so, U.S. policy has privatized profit and socialized risk.

The most unbelievable thing, as all this unfolds, is the absolute failure of BP and the whole industry to have a solution for this kind of disaster. Deep sea oil drilling is incredibly dangerous; how could these companies not have a plan for emergency?

But probe a little more, and maybe it's not so surprising. BP has the worst safety record, by far, of all the companies drilling along the coast. They regularly flout the law: They've got 760 citations for "egregious, willful safety violations" from OSHA; their nearest competitor in the oil industry, Sunoco, has 8 (Exxon, the last poster-child for oil-industry irresponsibility, has only 1.) They've now had three fatal accidents in the U.S. in the last five years. There was plenty of evidence that BP had prior knowledge of the problems that led to its Texas City refinery explosion, which killed 15 people, and the horrific Alaska North Slope oil spill. The fines the company has had to pay just haven't sufficiently cut into its profits.

So this is the firm Obama is relying on to do the right thing: clean up its mess, pay whatever it costs, and avoid the same mistakes in the future. I'm coming to sympathize more with the folks who are desperate to see Obama take the reins from BP, whatever that means.

From his Memorial Day break in Chicago, Obama released a statement on the latest bad news from BP. "It is as enraging as it is heartbreaking," Obama says. Maybe that will mollify critics who want to see Obama more angry and emotional, but I don't care about that. Obama has to make a difference, and I'm still not sure anyone knows how he does that. But the urgency of his need to try to grew exponentially on Saturday.