The Bravo show turns dysfunction into entertainment, but some of its subjects are too young to protect themselves 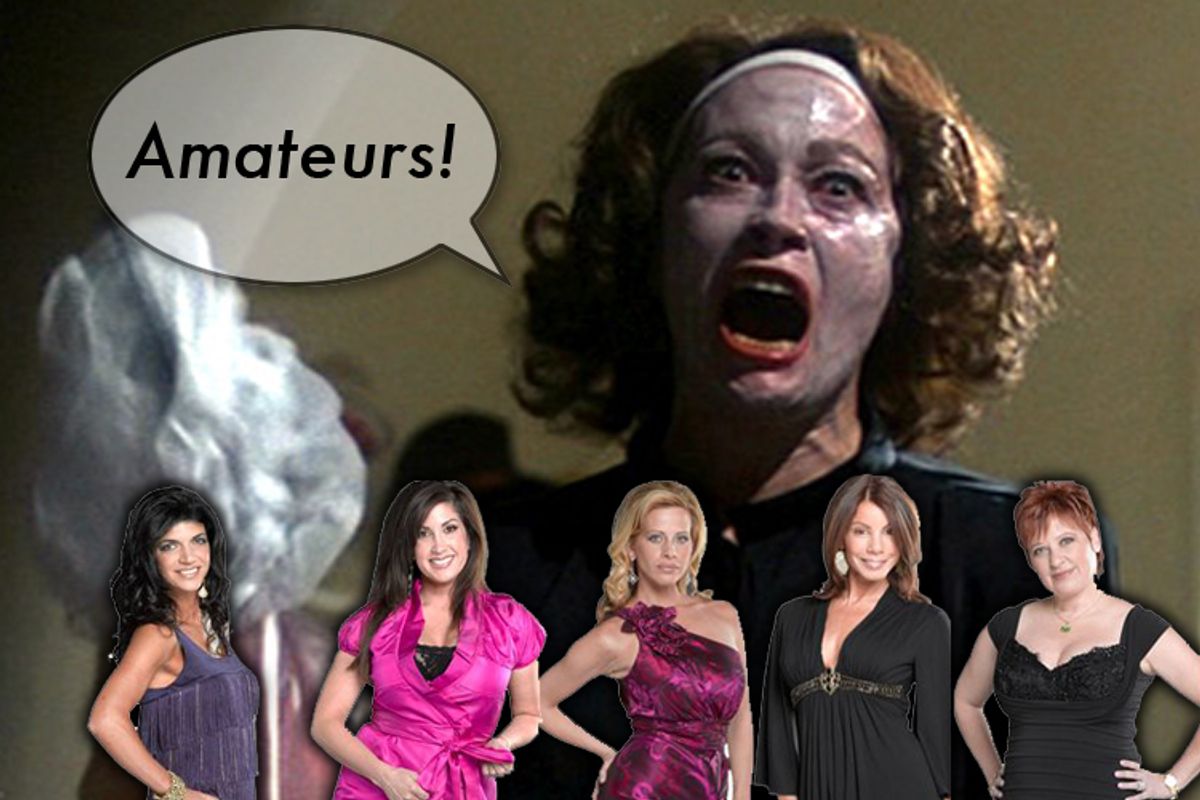 During a recent episode of Bravo's massively popular "The Real Housewives of New Jersey," housewives Jacquie and Dina meet at a maternity shop, to buy a gift for a fellow housewife.

Jacquie frets about her 18-year-old, Ashley, who refuses to heed her warnings about the dangers of going to clubs.

"Ever try knocking the shit out of her?" Dina says.

"I just think that she maybe needs to open a can of whoop-ass, kick her ass, and then maybe she'll listen," Dina clarifies. "She needs a good old-fashioned Italian beating."

Rest assured, the RHONJs do not actually beat their offspring on camera. That would be illegal. What they do instead, on a weekly basis, is harass, humiliate and exploit them.

Consider housewife Danielle. She's the designated villain of the program, a skeletal divorcee with a dark past and money problems. During the same episode, we see her informing her 15-year-old, Christine, that a modeling agency wants to hire her.

"When you make it big, you gonna remember me?" Danielle asks.

"Promise?" she says, nudging the girl with her sandal.

Danielle then turns to her 11-year-old, who looks (if this is even possible) more miserable than her older sister. "How about you, Jillian? You're next. Maybe I made a couple of stars. Superstars. And then we'll get another big house eventually."

This is what's known, in "RHONJ" circles, as a strong pimp hand.

It's no secret at this point that reality TV is a genre built on the perverse pageantry of degradation. For years, the basic formula has been to fill a mansion with unstable wannabe actors, pit them against one another, feed them booze, and watch them fuck and fight. As long as everyone is of age (and has filled out the required paperwork indemnifying the network) it's all fair game. There's no law against people making fools of themselves on national TV.

But what happens when the genre's demographic reach starts to invade childhood -- when those caught in the manufactured mayhem are too young to protect themselves?

The answer is pretty simple: Exploitation.

Sometimes, the accusations are overt, as in the case of "Kid Nation," an ill-fated CBS effort that asked 40 children to build their own society in a New Mexico ghost town. The result was at least one complaint to state officials, accusing producers of neglect, after several children were injured during filming.

Last year, the Pennsylvania labor department launched an investigation to determine whether the Learning Channel's hit show "Jon & Kate Plus 8" was complying with child labor laws.

But concerns about reality TV's youngest stars extend beyond labor laws. "What the producers of these shows are doing fits the larger pattern of commercial exploitation of children that's been growing for the past 20 years," says Nancy Carlsson-Paige, a professor of early childhood education at Lesley University who specializes in the impact of popular culture on children. "It's part of an amorality that's accepted in this country."

What makes "The Real Housewives of New Jersey" uniquely disturbing in the reality TV pantheon is the pervasive undercurrent of violence that animates the show. In an obvious effort to ape "The Sopranos," the five housewives are framed as the capos of their respective families. The tropes are all there: the tough talk about family loyalty, the sit-downs at Italian restaurants, and, of course, the confrontations.

The producers of "RHONJ" spend much of their time striving to incite a conflict between ex-con Danielle and the other housewives. They hit the jackpot last season when a housewife named Teresa unleashed a profane tirade against Danielle, flipped a table, and had to be restrained, presumably from a physical assault. Bravo aired the infamous table flip no fewer than eight times.

Did it trouble network executives that Danielle's children (15 and 11 years old) were watching all this? Apparently not, given that they were enlisted by Bravo to comment on-camera about the outburst.

"All that matters is boosting ratings to sell products," says Carlsson-Paige, whose latest book is "Taking Back Childhood." "And to do this, they bring children into a world where it's OK to hurt them to enforce discipline, to let them see adults throwing tables, to push them into adult behaviors that have nothing to do with their actual developmental needs."

Predictably, season two has been devoted to fomenting another conflict. During a recent episode, Danielle -- informed that the other housewives are throwing a party -- threatens to drive over and confront them.

The only reason she doesn't is because her daughters, who are trapped in the back seat of her SUV, literally beg her not to. It's a heart-wrenching scene, specifically because Danielle's children have to battle not only their deranged mother, but a team of producers deeply invested in her derangement.

Trust me when I tell you that reality TV gins up the drama. A few years ago, producers for a short-lived VH1 series asked to film a "documentary-type" segment about my candy obsession, based on a memoir I'd written. A crew of six arrived at my home and proceeded to march me through a series of increasingly absurd scripted "scenes." Pathetically, I went along with their requests until I was asked to "roll in candy" on my bed, something I’d last done when I was 5 years old.

As a reminder: I was an adult who voluntarily participated in an obscure show. But just imagine you're the child of a RHONJ. Whether you like it or not, you're part of a multimillion-dollar franchise. Your family life is suddenly scripted, and filmed, and your parents' most vicious and petty tendencies are continually stoked for the cameras.

There's a particularly despicable moment during a recent episode, when Caroline -- the oldest of the housewives and the most besotted by her maternal ferocity -- begins talking about Danielle's children.

"Don't you find it unusual that when you look at her children, you have children who have a light in their eyes, an expression, an innocence of childhood -- don't you think that's lacking in her children's eyes?"

"Oh, totally," Teresa says. "They're different. They've been exposed to too much."

The idea that insulting these children on national TV might constitute unhealthy exposure apparently never occurred to the housewives, or to the Bravo execs who chose to air this exchange.

"RHONJ" is lousy with this sort of unintended irony.

At one point, we see Teresa cajoling her daughters to pose for glamour shots on their first day of school. Her 5-year-old quickly melts down. "No more pictures!" the girl shrieks, over and over. It doesn't take a genius to figure out that her overreaction probably has something to do with the camera crew that's invaded her home, and absorbed her mother's attention.

The housewives march through their paces completely blind to the needs of their children, and pathologically devoted to their hatred of each other. "She's a con artist and she's going for the weakest link," Caroline hisses at one point, referring to Danielle.

The real con artists here are the producers, who have recruited a quintet of weak, narcissistically needy woman, and set them against one another for profit.

That would be just another day at the office, if these women didn't have kids. But they do, most of them too young to grasp the cynical charade unfolding around them. They just see tables flipped, insults spewed and cameras merrily capturing all of it.

The ultimate tragedy of a show such as "RHONJ," Carlsson Paige observes, is that it manages to commodify the destruction of childhood. "There's this kind of voyeuristic excitement people get from watching other people cross over the boundaries of acceptable human behavior. It makes people feel better about themselves to sit in judgment. But it's the kids who are paying the price. They're screwed. It's so so sad."