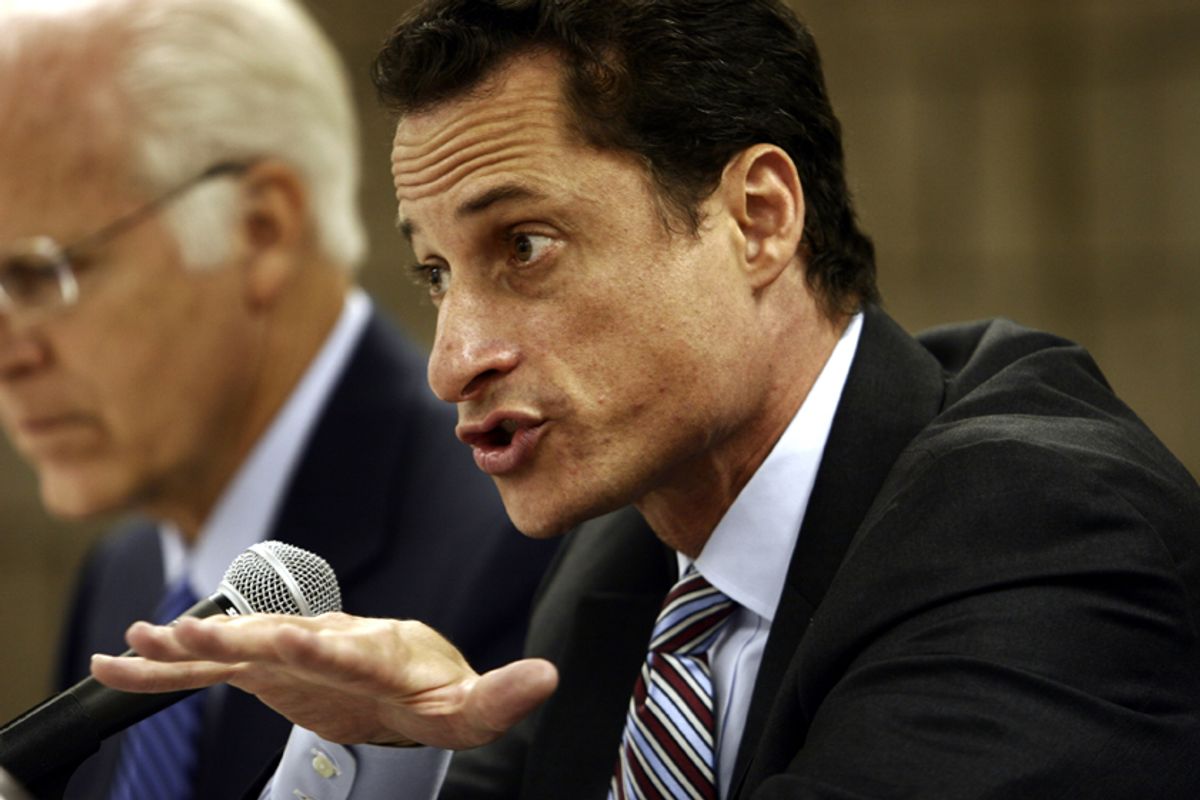 Rep. Anthony Weiner's completely non-measured, non-conciliatory remarks on the Israeli attack on the humanitarian aid flotilla are proof that he'd rather be a successful New York politician than a prominent national liberal.

It's a little odd, actually. Weiner has spent the last year becoming the sort of unapologetic liberal Democrat that netroots activists and cable news bookers love.

After deciding not to run for mayor of New York last year, Weiner dedicated himself to being a relentless advocate for the Democratic healthcare reform plan. (He blogged on HuffPo and everything.) He's great with a sound bite and he's a born street fighter in a party full of timid moderates. He's Jon Stewart's old college roommate. He's taking on Glenn Beck and sparring with Bill O'Reilly. He's easily one of the most prominent liberal politicians in the nation.

But at the end of the day, he still wants to be mayor of New York, once billionaire Mayor-for-Life Michael Bloomberg finally grows bored and steps aside.

Will the liberals who only know Weiner from his feisty MSNBC appearances and his staunch support of the president's domestic initiatives be put off when they hear him taking the "Israel can do no wrong" side in the debate over Israel's botched raid, in international waters, of a humanitarian aid flotilla?

Weiner's statement is comical. "Even if we are the only country on earth that sees the facts here," Weiner says, "the United States should stand up for Israel." That's the statement of a man with whom there can be no reasoning.

And it's not, by any means, outside the norm for Weiner. He's precisely the sort of liberal establishment politician that Peter Beinart accused of failing young American Jews in the New York Review of Books recently. In the past, Weiner has matter-of-factly accused Human Rights Watch and Amnesty International of being anti-Semitic. And not just them!

"I would argue that in many cases, the New York Times has" anti-Israel bias, Weiner told Amy Goodman in 2006. The idea of any elite, establishment newspaper in New York having an "anti-Israel bias" makes sense only if you consider any criticism of any action taken by the state of Israel to be out of line.

Also in 2006, Weiner introduced legislation banning aid to the Palestinian Authority and barring the Palestinian delegation to the U.N. (and kicking them out of the county). Weiner insisted that the PLO was a terrorist organization. And the delegation, he said, "should start packing their little Palestinian terrorist bags."

His demagoguery on this particular issue largely stopped once he decided he couldn't beat Bloomberg. But he's hawkish enough that Ronn Torossian, a scummy publicist who once told a journalist that he wants a thousand Arabs to be killed for every Jew, threw Weiner a "breakfast reception" in January. I doubt Torossian (who's represented right-wing religious cranks Benny Hinn and John Hagee) appreciates Weiner for his advocacy for single-payer Medicare for all Americans.

Support for Israel in all its conflicts is still the bipartisan norm in Congress, but the rise of the neocons in the Republican Party has made unquestioning support of Israel's current right-wing government increasingly a right-wing concern in the U.S. Democrats face pressure from the young, activist base to be more critical of Israeli actions than they were expected to be a generation ago.

But Weiner needs the support of New York's Orthodox and Hasidic communities if he wants to be mayor. And it's bad enough that he recently married a Muslim woman! (Check out the comments here if you want to see how quickly some right-wing Israel supporters can turn on one of their most steadfast political allies.) Philip Weiss says Weiner just repeats the talking points of the Israel lobby because that's what his constituency wants to hear. If that's true or not, he'll continue repeating the far-right line on Israel.

It will be interesting to see what sort of statement Sen. Chuck Schumer makes, if he makes one. Schumer's untouchable in New York, and he's been, like his protégé Weiner, a staunch ally of Israel throughout his carer. But Schumer wants to be the Senate majority leader. And a good portion of the senators who might support Schumer want an unapologetic liberal leader. I imagine Schumer will put out something equally uncritical of Israel, but way less confrontational than Weiner's statement.