Despite same-sex titillations, "Hitch-22" is an arrogant justification of the atheist's complicity in the Iraq war 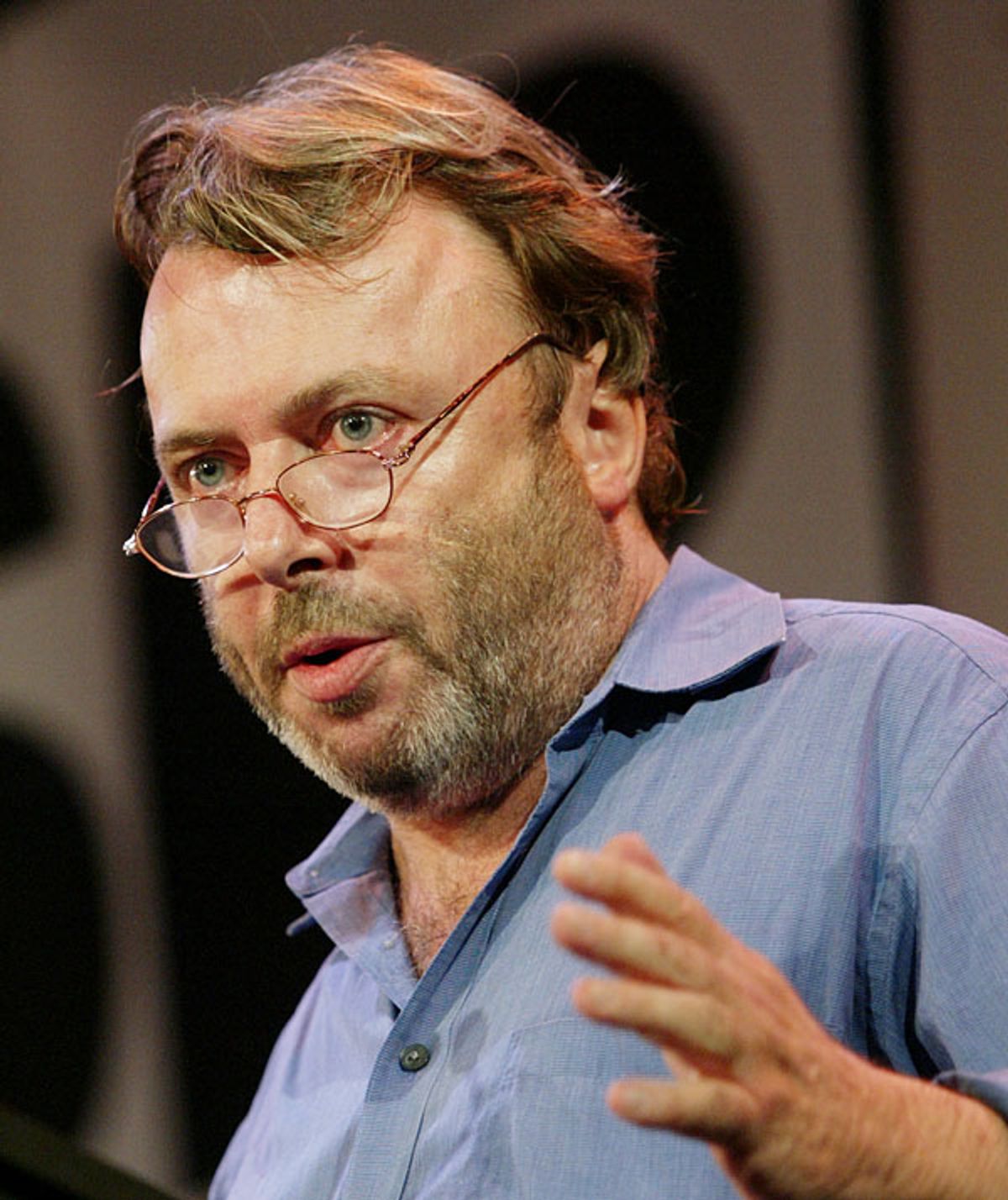 The book certainly isn't an autobiography. His icon, George Orwell, said that "Autobiography is not to be trusted unless it reveals something disgraceful," and Hitchens fails to mention that his first wife was pregnant with his child when he left her. In fact, there is barely any mention of his three children, only a passing mention of his current wife, and none at all of his younger brother, Peter, a right-wing columnist in England.

If you're interested in Hitchens trivia, "Hitch 22" is loaded. The favorite "good-bad book" (to use G.K. Chesterton's phrase) of his youth was "How Green Was My Valley." He is part Jewish (on his mother's side); she wanted him to be "an English gentleman." His father, a military man, was known as "The Commander." His "literary hero" is Borges, he thinks Costa-Gavras' "Z" is "the greatest of all sixties movies."

What about the big stuff, such as the supposed confessions of bisexuality that have been titillating the British press and his conversion from socialist or Marxist or whatever he felt like calling himself before the World Trade towers came down to defender of the Bush administration's Iraq policy? More on the latter in a moment, but the former amounts to nothing at all. Hitchens never really says he is or was bisexual; he does admit to having slept with a couple of unnamed young men while at Oxford, but I thought something like that simply meant you were English.

In place of revelation, there is lots and lots of gossip. Hitchens, to take him by his own accounts, is the Zelig of modern Anglo-American letters; he seems to have been everywhere, talked to everyone and made friends in every corner of the world, whether or not anyone else was there to record the conversation.

People seem to want to tell Christopher Hitchens their secrets; like Nick Carraway, he is "privy to the secret of wild, unknown men." Also some that are very well known: Gore Vidal, we learn, would take "rugged young men recruited from the Via Veneto ... from the rear" where they were then taken into the next room where "Tom [Driberg, the journalist] would suck them dry." (We are not told whether this occurred while Hitchens was still in his Oxford phase.)

Name-dropping, which has become a distressing trait in Hitchens' work in recent years, is now approaching critical mass. Long stretches of "Hitch-22" read like literary bouquets to Hitch gathered by himself. He names and quotes the usual suspects -- Salman Rushdie, Martin Amis and Ian McEwan, long ago identified by Hitchens as partisans. Joining their ranks are "my Argentine anti-fascist friend, Jacobo Timerman," "my Kurdish friends," Susan Sontag's son "my dear friend David," "my dear friend and colleague Jeff Goldberg [who] said to my face over a table at La Tomate ...," "my friend and ally Richard Dawkins," "my beloved friend James Fenton," and "my then friend Noam Chomsky" (even former friends with well-known names make Hitch's cut). Regrettably, the late great Trinidadian writer C.L.R. James didn't quite make the list; he passed shortly after Hitchens arrived at his deathbed.

When he isn't writing about his friends in "Hitch-22," he is usually writing about how proud he is to have such friends. He was "proud" to be mentioned several times in Martin Amis' memoir and "absurdly proud" to have a poem by James Fenton dedicated to him. He is, however, "offended" at the idea that he might have been Tom Wolfe's model for the English journalist in "Bonfire of the Vanities" -- in which case he shouldn't have mentioned it or I would never have known there was such a rumor.

That Hitchens wants to flash his friendships and credentials is of minor importance. That he wishes to justify his complicity in the disaster of the Iraq war is another matter altogether. "I probably know more about the impeachable incompetence of the Bush administration than do many of those who would have left Iraq in the hands of Saddam," he writes. To which the proper response would be: It's a shame you didn't know less or you might have made a smarter decision. "If I was ever naive about anything to do with Iraq WMD" -- please, Christopher, don't pretend to be disingenuous, you know very well if you were naive about this -- "it was in believing that the production of evidence like that, or indeed any other kind of evidence, would make even the most limited impression on the heavily armored certainties of the faithful."

In other words, Hitchens wanted war against Saddam whether there were WMD or not, and that those who disagreed with his position were guilty of "heavily armored certainties to the contrary" on the subject. In which case one wonders why Hitchens didn't simply write at the time, "I'm positive Saddam has WMD, but even if I'm wrong you should agree with my position."

Which leads to the one truly offensive section of "Hitch-22," namely Hitchens' dragging the family of a soldier who was killed in Iraq, Mark Daily of Irvine, Calif., into the story. Apparently the young man, a UCLA honors graduate, "had fairly decided reservations about the war in Iraq" but, according to a story in the Los Angeles Times that Hitchens quotes, "writings by author and columnist Christopher Hitchens on the moral case for the war deeply influenced him."

"I found myself thinking," Hitchens writes, "of William Butler Yeats, who was chilled to discover that the Irish rebels of 1916 had gone to their deaths quoting his play 'Cathleen ni Houlihan.'" Hitchens adroitly dismisses "any comparison between myself and one of the greatest poets of the twentieth century" -- except, of course, to point it out to us.

Hitchens goes on Jennings' MySpace page and finds a link to one of his own articles. This makes him feel "hollow."

"I don't intend to make a parade of my own feelings here," he writes, thus making a parade of his own feelings. He contacts the young soldier's family and pays them a visit. Why, exactly, do we need to know about this? It seems very much as if Hitchens is trying to let those of us who were and are against the war know that the soldiers who died in Iraq were decent and noble and had honorable intentions. But who would argue to the contrary? The sentiments of those who served there, no mater who influenced them, are not the issue in Iraq any more than they were in the Vietnam War or even World War II.

If Hitchens' intention was to take responsibility for having influenced the soldier's decision, which led to his death, it would have been easier to accept without the allusion to Yeats, to say nothing of his double talk in defense of the war. I'm reminded of a much more courageous admission made by Norman Mailer to a reporter who asked him what he would say if the parents of the man Jack Abbott murdered told him he had blood on his hands. "I'd say," Mailer replied, "that they were right."

God -- if Hitchens will excuse my use of the term -- knows that we always need a good, hard-bitten contrarian, but something has become skewed in Hitchens' vision since 9/11 shifted him to the right. In an article in October 2009 for the Atlantic, Hitchens feigned surprise at discovering that Jon Stewart, Stephen Colbert and Al Franken were ... liberal. "Bush's brain or IQ," he observes, "is enough to ignite peals of mirth from those in Stewart's studio crowd, who just know they are smarter than he." Of course, they are smarter than Bush, and Hitchens surely knows this. He does himself and his readers no service by pretending, even for a moment, that this isn't true, and he pretends it for more than 400 pages in "Hitch-22."