Why Israel will get away with it

And why that's bad news for everybody 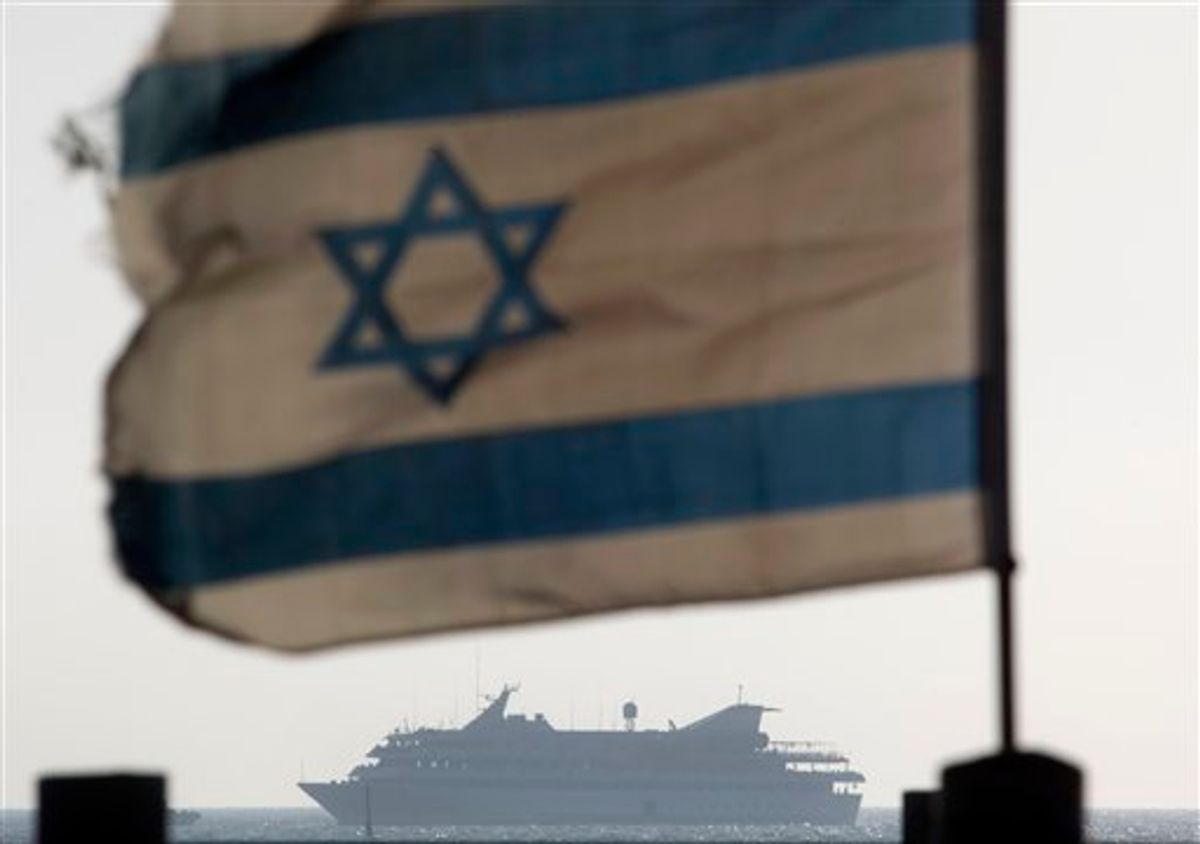 The Mavi Marmara ship, the lead boat of a flotilla headed to the Gaza Strip which was stormed by Israeli naval commandos in a predawn confrontation, sails into the port of Ashdod, Israel, Monday, May 31, 2010. Israeli naval commandos stormed a flotilla of ships carrying aid and hundreds of pro-Palestinian activists to the blockaded Gaza Strip on Monday, killing nine passengers in a botched raid that provoked international outrage and a diplomatic crisis. (AP Photo/Ariel Schalit) (AP)
--

The violence on the flotilla headed for Gaza would seem to be unambiguously bad news for Israel. In boarding a civilian ship carrying humanitarian aid supplies, and involving themselves in an incident that led to at least 10 civilian deaths, it seems clear that the Israeli Defense Forces have incurred a political cost for Israel that far exceeds whatever national interest they thought they were protecting. Europe is outraged, Turkey is cutting off ties, and an explosion in the occupied territories looks possible.

It's never easy to make guesses about what will happen in Middle East politics. But I think we're blowing the event out of proportion -- not in its moral gravity, but in its likely immediate political consequences.

First of all, the most crucial relationship Israel has is with the United States, and there isn't much indication yet that this will alter that relationship. The hard consensus at the elite level  in favor of tolerating whatever Israel wants to do rests on a soft consensus in American public opinion. Both are likely to survive this in some slightly diminished form, as they've survived the two Lebanon wars (complete with thoroughly unprovoked massacres), the small Gaza war and the formation of an Israeli government including a quasi-fascist foreign minister.

Plus, even though Israeli commandos boarded the ships as part of a broad, explicit and indefensible effort to keep basic supplies out of a desperately needy Gaza, Israel's supporters are aggressively pushing a blame-the-victims counternarrative.  There were clubs and knives on board the aid ships, they note, and there's now video of passengers chasing and attacking soldiers. This is likely to muddy the waters enough to keep Americans from reacting with outrage.

American conservatives are already doubling down on their attacks on the ship passengers. Writing at Commentary, Noah Pollak actually calls them "terrorist blockade runners." Apparently, you can be a terrorist even on the receiving end of the gunfire. At the National Review Online, Daniel Pipes writes, "Israel’s enemies ... turned to other means -- weapons of mass destruction, terrorism, and (most recently) political delegitimization. Delegitimization turns the rules of war upside down: in particular, strength is weakness and public opinion has supreme importance."

(In mentioning "delegitimization" in the same breath as weapons of mass destruction and terrorism, Pipes seems not to consider the fact that it's an odd weapon that requires the target to pull the trigger. You can't make Israel look that bad unless Israel is acting badly, and in that case, who’s the villain? Pipes is like the South African politician who accused anti-apartheid activist Helen Suzman of embarrassing her country. She replied, "It is not my questions that embarrass South Africa. It is your answers.")

But Pipes' pessimism is probably misplaced. Seeing conservatives rally to Israel's defense and liberals agonize and waffle, Americans who are paying even moderate attention will probably just figure that this is more of the usual. While the Obama administration has been trying to apply pressure to the government of Prime Minister Benjamin Netanyahu, we've yet to see any willingness to expend significant political capital on the effort. This latest might give President Obama more leverage, and lend weight to his warnings that Israel is undermining its own long-term political standing. But it seems equally likely that it won't have any significant short-term consequences, and Israeli conservatives will figure that everything turned out for the best.

If the U.S. fails to use the violence as a teachable moment for Israel, who will? For all that Europeans are furious, it's hard to tell what they can, or would, do about it. And if Netanyahu will happily ignore and snub the U.S., it's just about unimaginable that he'd give France or Spain the time of day.

That leaves the Palestinians as the likeliest to register some kind of meaningful protest with Israel. But if the killings at sea do spark a new uprising or a wave of terrorism, Israel is likely only to entrench further, and the American and Israeli right wings will both once again blame the Palestinians for obstructing peace.

I'm no expert on Palestinian public opinion, but I doubt that will happen. The attack was in international waters, and on an international group of activists. The ships were delivering civilian aid. This all feels particularly egregious for Western liberals. And it is particularly egregious. But for Palestinians, it probably seems somewhat routine. When you live, stateless, under a decades-old military occupation, punctuated by periodic demolitions, airstrikes and blockades, these distinctions -- civilian and military, international and sovereign -- likely lose some of their force, and seem a bit academic, or even sentimental. The IDF has killed thousands of Palestinians, after all. To predict a massive rebellion now, because Israel dared to attack a ship with Europeans on board, is a weird sort of demand for sympathy from people who have to dole it out sparingly at this point.

Obviously, the situation is open. Prediction is something of a mug's game. But this mug, at least, thinks that Israel is going to get away with it.

But what getting away with it means is figuring out how to keep the cork in the bottle a little bit longer. The more Israeli politicians put off some kind of reckoning, the worse it's likely to be. The best thing that could come out of this incident for the Jewish state would be for an international coalition to use it as leverage against Netanyahu. At the moment, for him and his allies on the right, the basic model of governance is to borrow against Israel's future position, in exchange for short-term gains of security or territory. In other words, in the long term, getting away with it is bad news for Israel. But, for the time being, that isn't especially important to the Israeli government.