In dialogue with international community to expand the amount of goods entering Gaza. Egypt opens border 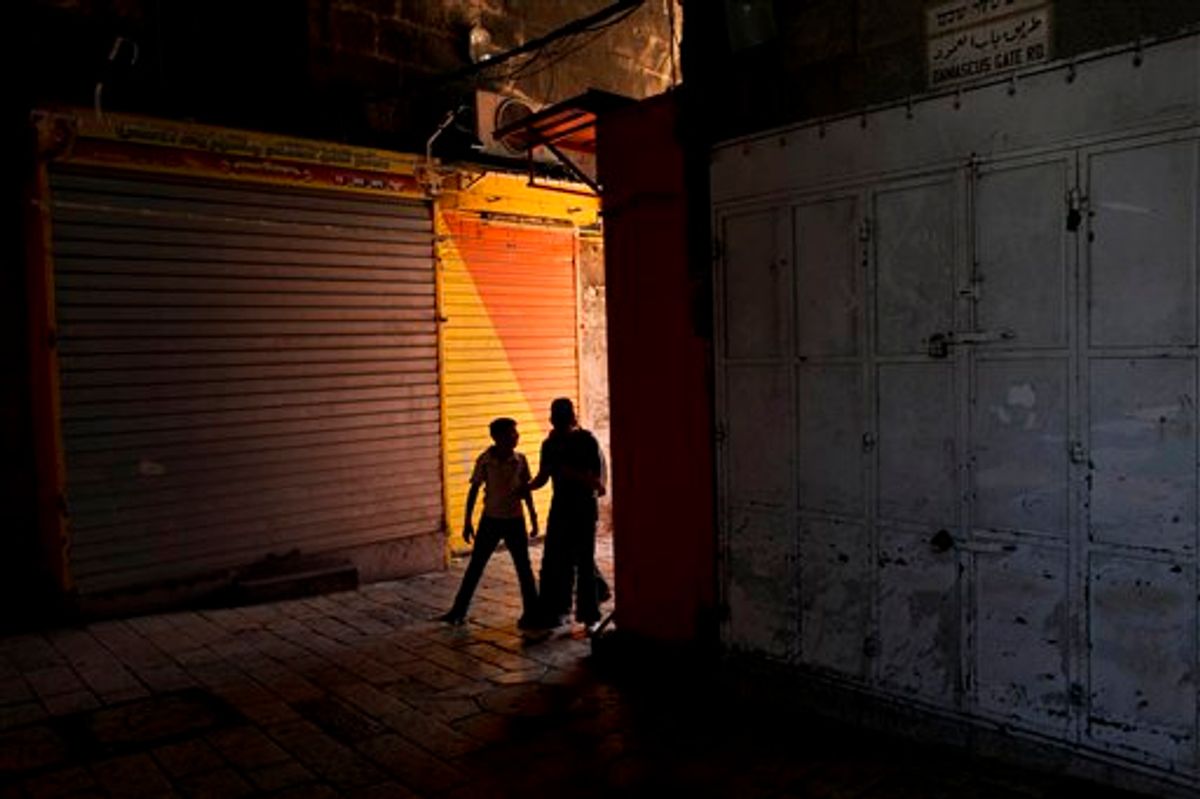 A Palestinian woman and youth pass in front of shops closed as part of a general strike by Palestinians to protest against the Israeli naval commando raid on a flotilla attempting to break the blockade on Gaza, inside Damascus gate, in Jerusalem's Old City, Tuesday, June 1, 2010. Activists seized by Israeli authorities in the deadly raid on a Gaza-bound aid flotilla returned home to European nations Tuesday, including a Turkish woman who brought her one-year-old baby on the voyage. Israel has released some activists, but barred access to others taken off the six boats. (AP Photo/Tara Todras-Whitehill) (AP)
--

Israel and Egypt signaled a temporary easing of the Gaza Strip blockade Tuesday following harsh international condemnation of the deadly Israeli raid on an aid flotilla en route to the sealed-off Palestinian territory.

Egypt said it was freely opening its border with Gaza for the first time in more than a year to allow in humanitarian aid, setting off a mad rush to the crossing by thousands of residents, while an Israeli official said there is an "ongoing dialogue" with the international community on how to expand the amount of goods entering the area.

At the same time, Israel began expelling some of the nearly 700 activists it rounded up in the naval raid, and strongly rejected criticism of its heavy-handed tactics. The government said late Tuesday it would deport almost all of them within the next two days, but about 50 would be held for investigation into their part in the violence on at sea.

Israel pledged to halt a new attempt by pro-Palestinian groups to sail more ships into Gaza, and claimed some of the arrested activists carried weapons and large quantities of cash, raising questions about whether they were mercenaries.

Worldwide condemnation has been flooding in since Israeli naval commandos halted the aid flotilla in international waters overnight Monday, setting off a melee that left nine activists dead and dozens wounded. Turkey, an unofficial backer of the flotilla, has led the criticism, accusing Israel of committing a "massacre," and the U.N. Security Council demanded an impartial investigation.

There were signs, however, that the long-term strategic partnership between Israel and Turkey -- the Jewish state's most important Muslim ally -- would endure.

Israeli Defense Minister Ehud Barak spoke to his Turkish counterpart Tuesday, and they agreed the raid wouldn't affect weapons deals, defense officials said. Among them is the planned delivery to Turkey of $183 million in Israeli drones this summer. The officials spoke on condition of anonymity because they were discussing sensitive military ties.

U.S. Secretary of State Hillary Rodham Clinton supported a Security Council statement that condemned the "acts" that cost the lives of the pro-Palestinian activists off the Gaza coast. But U.S. officials did not say whether they blamed Israel or the activists for the bloodshed.

In remarks to reporters at the State Department, Clinton did not call for an end to the blockade, but she pressed Israel to allow greater access for humanitarian relief supplies, "including reconstruction and building supplies."

In a jab at Israel, Clinton said the situation in Gaza, which is controlled by Hamas and under an Israeli blockade, is "unsustainable and unacceptable."

The flotilla was meant to draw attention to the Israeli and Egyptian blockade of Gaza, imposed three years ago after Hamas militants violently seized power. Israel says the blockade is needed to prevent Hamas, which has fired thousands of rockets into the Jewish state, from building up its arsenal. Critics note the closure has failed to hurt Hamas, while damaging Gaza's already weak economy.

"In Gaza, there is a terrorist state under Iranian sponsorship," he said. "Opening a sea route to Gaza would present a grave danger to our citizens. Therefore we are maintaining our policy of a naval blockade."

A new confrontation appeared to be brewing.

Greta Berlin said the Free Gaza Movement, which organized the flotilla, would not be deterred and that another cargo vessel was off the coast of Italy en route to Gaza. A second boat carrying about three dozen passengers is expected to join it, with both arriving in the region late this week or early next week, she said.

"This initiative is not going to stop," she said from the group's base in Cyprus.

Despite the rising tension, Netanyahu's spokesman, Mark Regev, indicated Israel would consider ways to ease the blockade to allow more goods into Gaza -- a policy that has been quietly under way in recent months.

"We have been expanding the assistance that has been going into the Gaza Strip -- both the volume and the variety of goods -- and we have ongoing dialogue with the international community," he said.

Egypt, which has cool relations with Hamas, announced the opening of the border to allow aid in what it called a humanitarian gesture. It was unclear, however, when Gaza's Hamas rulers would allow people to cross into Egypt and how long they would be permitted to pass.

The Rafah border crossing in Egypt is the main gateway for Gazans to leave. Egypt has kept it largely shuttered since a devastating Israeli military offensive in early 2009, periodically opening the crossing to allow aid shipments and humanitarian cases to pass through.

Several thousand Gazans -- some in cars with suitcases piled on their roofs, others on foot -- rushed to the Egyptian border, hoping to take advantage of a rare chance to escape. After milling about for several hours, they were sent home by Hamas security forces.

The Hamas Interior Ministry said police were not prepared to open the crossing and did not say when they would do so.

Amid the tensions, the Israeli military said it carried out an airstrike in Gaza on Tuesday, killing three militants who fired rockets into Israel. Two militants infiltrating into Israel from Gaza were killed in a separate incident Tuesday, the military said.

The pro-Palestinian flotilla was headed to Gaza with 10,000 tons of aid that Israel bans from Gaza. After days of warnings, Israel intercepted the flotilla under the cover of darkness early Monday, setting off the violent clashes. Most of the dead were believed to be Turks, and the wounded included seven soldiers, two of whom were apparently shot with weapons taken from soldiers by the activists.

Three Israeli helicopters dropped 45 commandos on the largest ship, the Turkish-flagged Mavi Marmara, to face more than 500 activists on board. Israel said Tuesday about 50 of them were deployed for battle, armed with knives and clubs, some wearing gas masks. In all, about 700 Israeli troops took part in the takeover of the six ships, sailing in more than 20 Israeli vessels. The 700 included surveillance and support troops alongside those who boarded the ships.

Turkey's Foreign Ministry said four Turkish citizens were confirmed slain by Israeli commandos and five others were also believed to be Turks. Israeli authorities were trying to confirm their nationalities.

Within Israel, the raid sparked intense debate over the military operation, which the daily Maariv, in a front-page headline, called a "debacle." Analysts criticized the poor preparations.

Israel sent the commandos onto the six ships after mission organizers ignored government calls to bring the cargo to an Israeli port. After inspection, some of the aid was transferred to Gaza over land on Tuesday.

In most cases, the passengers quickly surrendered. But on the Marmara, the forces encountered unexpected resistance.

Video released by the army showed commandos dropping onto the ships on ropes from a helicopter and being attacked by angry activists with metal rods and firebombs. One soldier was thrown overboard and others jumped in the water to escape. Israeli authorities said they were attacked by knives, clubs and live fire from the two pistols wrested from soldiers.

The soldiers said they were armed with paint guns -- normally used as a non-lethal crowd-control tactic -- and were ordered to use pistols only as a last resort.

Israel has accused the Istanbul-based Foundation for Human Rights and Freedoms and Humanitarian Relief, which helped organize the flotilla, of fomenting the violence. Israel has outlawed the group, claiming it has close ties with Hamas -- a charge the charity denies.

In a meeting with Netanyahu, Israel's naval commander, Adm. Eliezer Marum, called the incident a premeditated ambush, raising the possibility that some of the activists were hired mercenaries, according to a meeting participant.

Marum said about 40 men were armed with military-style gear and carrying large sums of money. The participant spoke on condition of anonymity because the meeting was closed.

Israel said 679 people were arrested, and about 50 of those had left the country voluntarily. Hundreds who refused to cooperate remained jailed, although the Israeli government said Tuesday night that it would deport all but 50 of the remaining activists, probably within 48 hours. Those who remain would be investigated by police for their roles in the violence aboard the ship.

The Al-Jazeera satellite TV channel said four of its reporters were among those detained.

Israeli Interior Ministry spokeswoman Sabine Haddad said more than half of those arrested were from Turkey, with others coming from more than 30 other countries, including Britain, Algeria, Jordan, Kuwait, Germany and the U.S.

Israel did not allow access to the activists, but a handful who were deported arrived home Tuesday, including a Turkish woman and her 1-year-old son, six Greeks and three German lawmakers.

"There was a massacre on board," said the woman, Nilufer Cetin, whose husband, Ekrem, is the Marmara's engineer and remained in Israeli custody. "The ship turned into a lake of blood."

Norman Paech, a former member of Germany's Left Party who was aboard the Marmara, said he only saw three activists resisting.

"They had no knives, no axes, only sticks that they used to defend themselves," Paech told reporters in Berlin after he and four other Germans returned from Tel Aviv. He said he could "not rule out" that others used weapons somewhere else on the boat.

The raid has set off a legal debate over whether acted illegally by venturing into international waters.

Israel's Justice Ministry issued a statement saying the actions were permissible under international law since the vessels were clearly headed toward a hostile territory.

Joe Powderly, an international law researcher at the T.M.C. Asser Institute in the Netherlands, rejected claims by some critics that Israel committed an act of piracy.