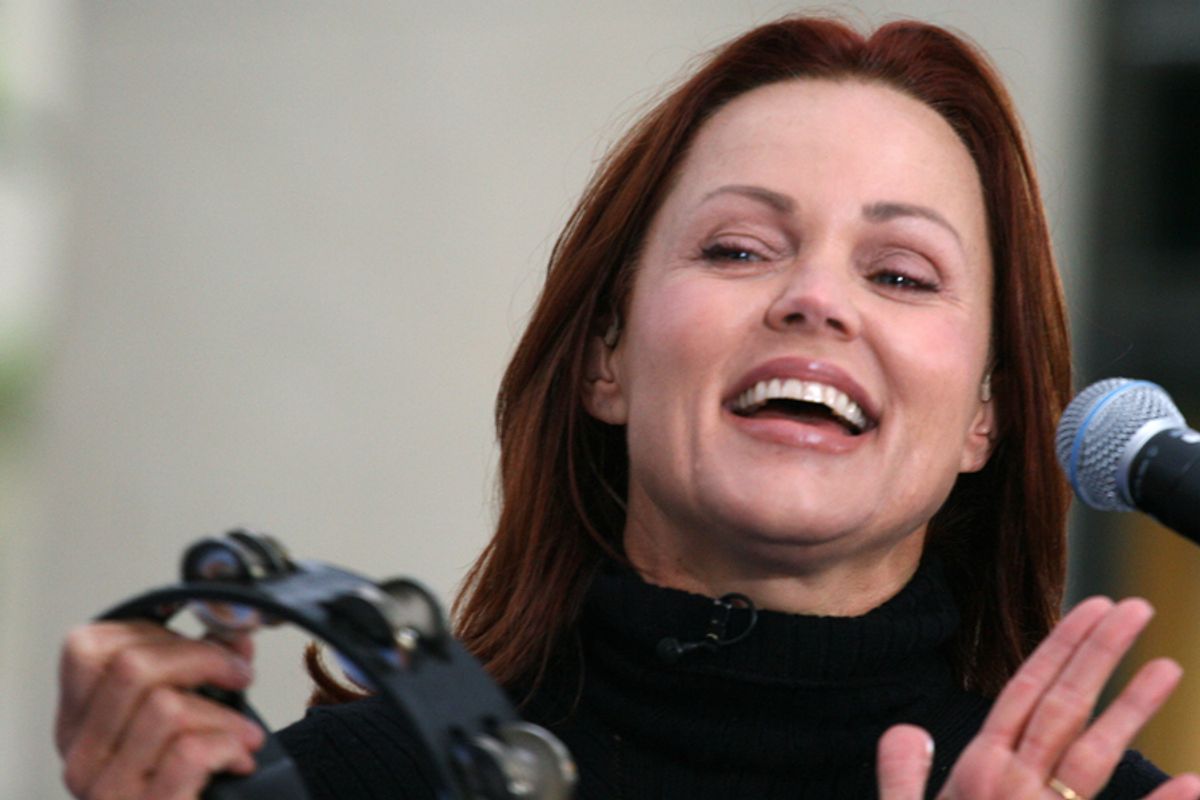 For close to 20 years, Belinda Carlisle led a double life. Even as she sang carefree, upbeat pop classics as the lead singer of the Go-Go's, Carlisle wrestled with shyness, a dark past of abuse and a spiral into serious drug addiction. Later, when her hard-partying ways became the stuff of tour circuit legend, Carlisle presented herself to the world as clean and sober when, in fact, she continued to stay up till dawn at clubs and do lines while her husband was asleep. It took a vision of her own death from overdosing, in 2005, to motivate her to finally give it all up.

Her new memoir, "Lips Unsealed," talks about drugs and rock 'n' roll, of course, but it also touches on more recent challenges -- the failure of her latest albums to crack the U.S. charts ("A Woman and a Man," "Voila"), as well as raising her son while digging through feelings of self-loathing and supporting him after he came out. Salon called Carlisle to talk about lying in the spotlight, being airbrushed by Playboy, and why music sucks today.

One of the big surprises of this book is how long your problems with drugs lasted -- you only became sober in 2005. What was it like to hide that?

It was horrible. I never said I didn't drink in interviews, but people assumed that I didn't and I wouldn't correct them. I just let it go. I never said that I don't do anything, I just didn't tell the whole truth. Towards the end, when it was obvious there was something wrong, it was really shameful. There was one point five or six years into my so-called sobriety that I would just say that I was applying the 12 steps to my life, because I knew I couldn't say that I was sober. It was such a blatant lie. It was embarrassing.

Why did you decide to confess all that in your memoir now?

I just thought it was time. I felt at this point I had the time to do it, and I had this sort of clarity to take a look back and write a book that's not just a rock 'n' roll dirty laundry story -- though of course there has to be a little bit of that. I wanted to write more of an inspirational book about how one can make changes late in life, and about how it's possible to overcome abuse, addiction and self-sabotage. I've been through it all.

I noticed a strain of what might be called mysticism in your book. You talk about a ghost, a black bird that's an omen, and being drawn toward black magic when you were younger. What are your feelings about spirituality?

I was forced to go to church when I was young. I didn't buy the whole Bible thing. To me, that didn't make any sense at all. Even when I was a really little girl, about 7 or 8, I would just kind of roll my eyes. But at the same time, in even the darkest moments, I knew there had to be something. When I turned 40 I started exploring that. When I finally did get sober, I made a list of 20 ways I had been protected in my life and that just nailed it. I looked at it and realized there was no reason I should be alive right now. There are too many weird little things that have happened in my life. I have my version of what my god is. I know it's not conventional; I take a little bit of everything and mix it all together. It's an important part of my life, and actually always was, I just never realized it.

Drugs led you down some unusual alleyways. What was the scariest situation you found yourself in?

Oh, god. My encounter with the coke dealers in Brazil was pretty wild. I was in Brazil looking for coke. I was so out of control, I don't even really remember the fine details. All I know is that I met a very prominent politician's daughter who pointed me in the direction of a guy I could get blow from. And then I ended up in what was basically a drug mill at a penthouse apartment overlooking Ipanema Beach at 2 in the afternoon. It was so hardcore, there were guns everywhere. It's amazing that I'm not dead, honestly.

How did your son react to the book?

He loved it. When I go to [AA] meetings I bring him because I want him to know about the nature of the illness. So he wasn't that surprised. I mean some of the stuff he was kind of like "Wow!" But he can handle it. In some ways, he's more mature than me.

You posed for Playboy a couple of years ago and were surprised when you saw how much they had airbrushed you. What was it like to get those photos back?

I was bummed out. I think the originals looked better than the airbrushed versions. Some of them were real and some of them were just ridiculous. I remember a friend looking at one of the pictures of me and saying, "God, I wish I had a butt like that!" and I said, "Me too!" [Laughs]. I don't know where they got it. It was a great experience, but the result could have been better. I remember reading a letter that got sent to the magazine that said something like, "I bought this Playboy hoping to see a beautiful, voluptuous woman and all I got was a character out of Shrek." I thought that was hysterical.

The Go-Go's began in the L.A. punk scene, but now you're thought of mostly as a pop group. How do you feel about that legacy?

I think a lot of people don't know the origins of the Go-Go's. They assume that it's like a Spice Girls thing that's been put together by some Svengali. But it started with five of us kids sitting on a curb having no idea how to do anything, no musical experience or training, not even knowing how to plug guitars into amplifiers. And we went from that to becoming the biggest band in America two and a half years later. People think of the Go-Go's as the girl group that sang silly little pop songs, but really, if you delve into the lyrics, a lot it is very dark. I'm really proud of the punk background. If it wasn't for the punk scene, the Go-Go's would never have existed. I would never have existed.

Today, there's no outlet for kids. With the punk thing, anybody could be in a band and be terrible. You could not know how to play music and stand there onstage and get shows. If you improved as you went along, that was great. If you didn't improve, that was great. These days, a band like the Go-Go’s couldn't exist because we wouldn't have any outlet to be seen or heard or learn as we went along. We wouldn't have the avenues to do any of that.

You encountered a lot of resistance from the punk scene when the Go-Go's started getting big. How did you respond to those accusations of selling out?

All of us were affected by not being able to go home again. We weren't able to fit in after we came home from these tours, or at least I certainly wasn't. You could never admit in that scene that you wanted to be successful, that you wanted to make lots of money and be a rock star because it wasn’t cool. That's one of the reasons why Margot [Olaverra], the girl who Kathy Valentine replaced, didn't work in the band because she wanted to stay true to the punk roots and really, we just wanted to be successful.

The Go-Go's kicked down a lot of doors for women musicians. Do you see any glimmers of that spirit in any bands today?

No, I don't. I don't dig through record stores anymore. There may well be people I don't know about. But I think in the climate of music today, in the age of "American Idol," music now tends to be more about marketing rather than artistry. There is some amazing stuff, but for the most part I think we need a new punk rock revolution. We need something to shake everything on its head. Right now everything is sterile, it's really stagnant. The stuff that you get fed in the mainstream is pretty much horrible.

Margaret Eby is a frequent contributor to Salon. Her work has appeared in Bookforum, Interview Magazine, and the New York Times Local blog, among other publications. She lives in New York.