Why Israel should have known better 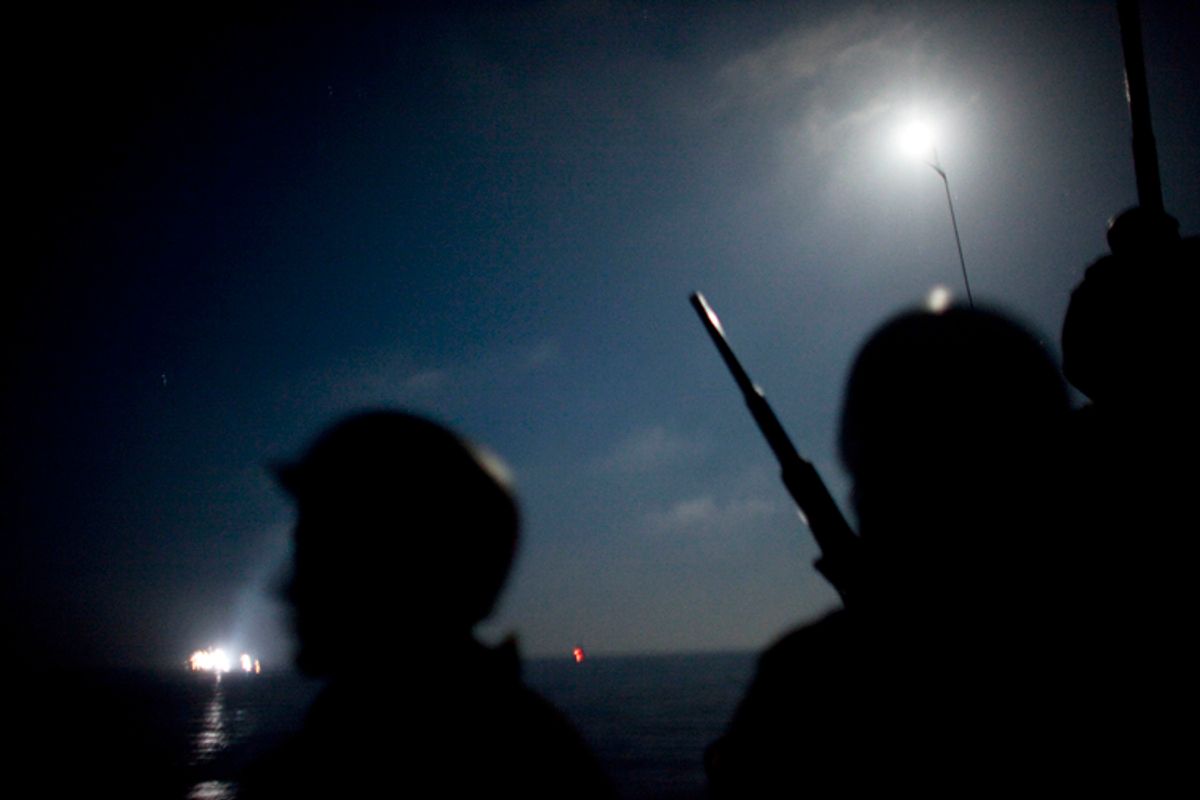 The view from aboard an Israeli naval vessel, as Israeli navy soldiers intercept several boats headed toward the Gaza Strip, while in international waters, early Monday.
--

Today's Wall Street Journal features a disturbing essay on the Gaza flotilla tragedy by Ronen Bergman, an investigative journalist for the Israeli news organization Yediot Ahronot, who specializes in intelligence and terrorism (and is by no means a "leftist"). Reviewing Israel's past experience with potentially similar incidents, Bergman explores why its leaders would once more issue orders that were so stupid and so damaging to the interests of the Jewish state -- a decision he finds hard to comprehend. (As do I.)

The horrific outcome -- so far nine killed and dozens wounded -- has caused irreparable damage to Israel's image. Even if the video evidence proves beyond doubt that the activists on board the ships were armed and that they were the first to attack, the battle for public opinion (which, after all, is what the flotilla exercise was really about) was lost the moment the first Israeli soldier set foot on the deck of the Mavi Marmara -- the Turkish ferry that served as the flagship.

What makes the flotilla fiasco all the more astounding is that Israel has been preparing for this confrontation for months. It has had time to run various scenarios, and even to review strategies it has previously employed for similar events.

Bergman points out that when Palestinians and their supporters sought to reach Gaza by ship on previous occasions, Israeli leaders were careful to avoid direct confrontation. In 1988, the Mossad simply blew up the Al Awda, a PLO vessel docked in Cyprus, before it could embark for Gaza with 131 deported intifada activists aboard. (The sabotaged boat was empty when it sank.) In August 2006, another boat bound from Cyprus with peace activists and food supplies aboard was stopped, boarded peacefully and searched by Israeli naval officers -- and then allowed to proceed to Gaza.

According to Bergman, the Netanyahu government must have known that this time would be very different for a variety of reasons -- and that "any attempt to take control of the vessels would almost certainly result in violent confrontation."

This is what makes inexplicable the IDF's decision to have members of the Flotilla 13 commando unit board the Marmara. These men are not trained to deal with civilian protestors. And there were other options available to the IDF, such as disabling the ships at sea and towing them to an Israeli port.

Why then did Israel act so recklessly, with self-destructive consequences? Bergman's troubling conclusion suggests a new kind of weary intransigence:

Many observers, myself included, often resort to the concept of siege mentality when attempting to make sense of Jerusalem's approach to international relations. It is also true that the memory of the Holocaust still looms large in Israel, especially when existential threats -- in which category I emphatically do not include a grab-bag collection of Turkish boats -- emerge on Israel's horizon. But until recently, even with its siege mentality, the Israeli government always made an attempt -- half-hearted, or ill-conceived, or badly executed, but an attempt nonetheless -- to act in a way that would minimize possible harm to the state's international image.

What we witnessed in the early hours of Monday morning was symptomatic of a new degree of fatigue in Israeli governing circles. The fact that both the political and the military authorities could sign off on such an irresponsible operation suggests that the leadership of the country has given up what it has concluded is ultimately a Sisyphean attempt to accommodate world opinion. Isolation is no longer a threat to be fought, their thinking seems to go, because Israel is terminally isolated. What remains is to concentrate exclusively on what is best for Israel's survival, shedding any regard for the opinion of others.

"It makes no difference what we do, or how careful we are, or how we tackle the matter of the flotilla," I was told by a very senior military source two days before the operation. "Whatever we do, they'll all be against us, they'll condemn us at the U.N., and we'll be scolded. We might as well at least preserve our national dignity and maintain the blockade of Gaza." In other words, the war over world opinion is over -- and Israel has lost ...

Israel's fatigue and deep sense of ostracism is, to say the least, unhealthy. It would be unhealthy for any country at the best of times. But it is particularly troubling when the country in question is at perpetual war, and when it is repeatedly threatened with annihilation by the leader of a country who is actively pursuing nuclear weapons. And, of course, it is profoundly disturbing when the fatigued and isolated country itself has the means to strike pre-emptively and punishingly at its enemies, including in ways from which, realistically, there may be no return.

And there is not much else to say -- except that the implications for Obama's hopes of reviving the peace process are just as grim.