A new threat to the GOP's Senate chances

Illinois Republican's fibbing about military record catches up with him, possibly costing the party a key race 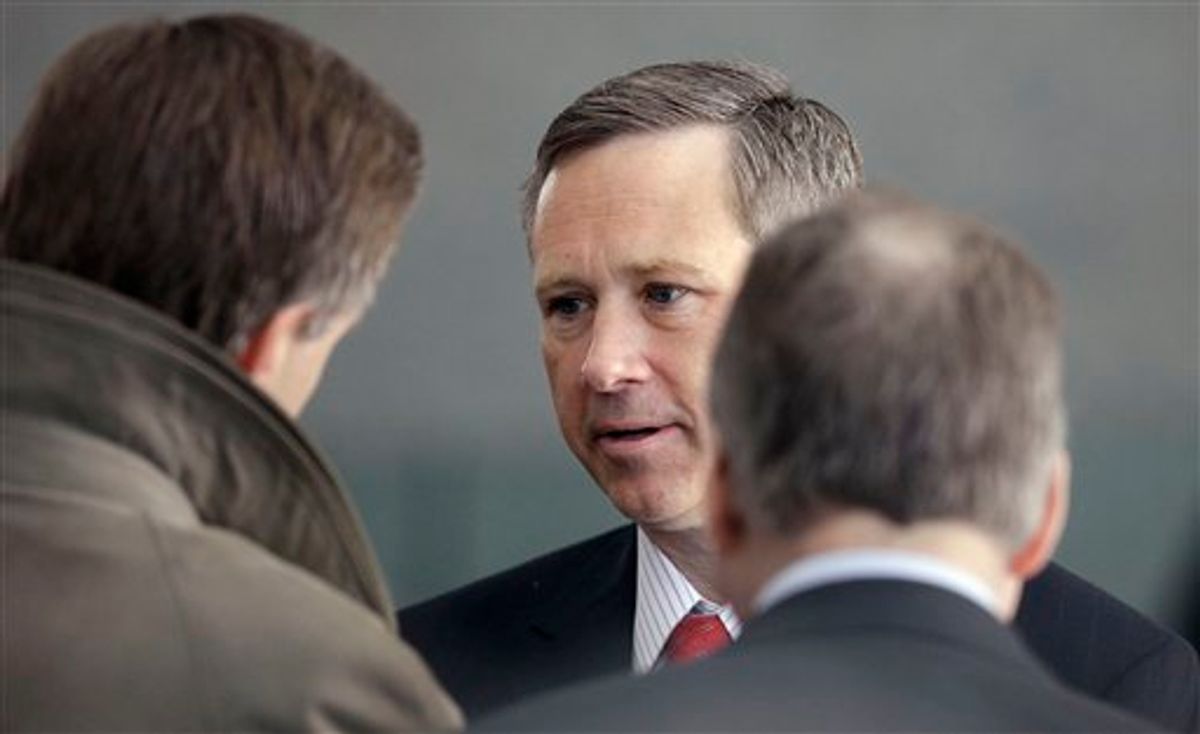 U.S. Rep Mark Kirk, R-Ill., speaks with reporters at the federal building in Chicago, Thursday, April 16, 2009, after a news conference where he said at least 31 people in suburban Chicago have died so far this year after overdosing on unusually strong heroin. Kirk says officials have tracked the heroin to drug cartels in Mexico. (AP Photo/M. Spencer Green) (Associated Press)
--

You know what's going to be fun? When the GOP doesn't do as well as expected this November, and everybody starts blaming everybody else. Shouldn't have got your hopes up so high, guys.

Now, there's no way that Republicans aren't going to have a good November in absolute terms. But a sign here and a sign there are starting to suggest that it might not be the stellar midterm that the minority party has been dreaming of and getting ready for. The president can point to some successes, with healthcare, financial reform and signs of economic recovery, for one thing. For another, it looks like we can count on Republicans to figure out a way to screw it up for themselves.

The latest example of Republicans finding an opportunity to miss an opportunity comes in Illinois. The Senate seat once held by Barack Obama is a major prize, and Republicans badly want to win. Everything seemed to line up just right. Democrats nominated a damaged candidate in state Treasurer Alexi Giannoulias, and scandal was hanging over the incumbent party anyway thanks to the collapse of the Rod Blagojevich administration. Republicans, meanwhile, got their dream nominee: Rep. Mark Kirk, from the Chicago suburbs, is the rare true suburban centrist Republican to survive the collapse of his wing of the party. He's staved off a couple of tough Democratic challenges, managing to become one of only seven Republicans to represent a district carried by John Kerry in 2004. In a state where moderate Republicans have thrived, but conservatives have been trounced repeatedly by mediocre Democratic hacks like Blagojevich, Kirk seemed to be just the ticket.

Then he stumbled. He pulled a Dick Blumenthal, except arguably worse. It turns out that Kirk's been going around telling people for ten years that he was named the Navy intelligence officer of the year -- though the year in which he claims to have won bounces between 1998 and 1999. There was a Navy intelligence officer of the year in each of these years. Neither of them, however, was Mark Kirk. He's now saying that he confused the award with another, granted to his unit as a whole for outstanding service.

This isn't the worst crime in the world, just like it wasn't when Blumenthal did something similar. It's just a little bit gross. Although, while Blumenthal seems to have purposefully taken advantage of ambiguity, Kirk has been doing something a shade nearer to outright lying.

But Kirk doesn't have Blumenthal's cushion to break his fall. Blumenthal is a beloved longtime state officeholder running in a friendly state against a weak, if well-funded, opponent. Kirk, though, is running statewide for the first time, in a state generally hostile to his party. And though his opponent, Giannoulias, is tainted by scandal, he's also young, well-funded, a previous statewide winner, and in line with the state's politics. In other words, even if his sin were exactly equal to Blumenthal's, Kirk could afford it less. So he may have just blown it.

Nor is Illinois the only Senate race slipping a little bit from the GOP. In fact, just this week, Blumenthal’s opponent, the free-spending fake-wrestling tycoon Linda McMahon, drove her more electable, reasonable rival, Rob Simmons, out of the primary race. The Washington state Senate race is looking up for Democrats too; incumbent Democrat Patty Murray must be pleased that Sarah Palin intervened to endorse a no-name right-winger, while the GOP's prize recruit, Dino Rossi, was still deciding whether to enter the race. (No announcement yet.)

In Nevada, Tea Party Republican Sharron Angle has stormed from the back of the primary pack to catch up with frontrunner Sue Lowden. This, despite the fact that Angle's probably the only candidate incumbent Sen. Harry Reid might be able to beat. Meanwhile, Carly Fiorina has finally opened up a decisive edge in Republican primary polls in California, although the rival she's putting away, Tom Campbell, would undoubtedly be a stronger candidate against incumbent Sen. Barbara Boxer. In Florida, Gov. Charlie Crist's independent Senate campaign so far looks like it has hurt Democratic candidate Rep. Kendrick Meek more than GOP nominee Marco Rubio. But nobody knows who Meek is yet. And with Crist in the race, he may only need 35 or 40 percent of the vote, which looks manageable, once the Democratic campaign gets going.

Then, of course, there's Kentucky. It's a deeply conservative state, so Republicans really have no business losing. And probably, nominee Rand Paul will pull it out in the end. But he’s going to have to win a real fight with the Democratic nominee, state Attorney General Jack Conway. Conway must be thrilled to be facing the ideological freak-show Paul instead of the orthodox Republican who lost the primary, Trey Grayson.

None of this means the Republicans are going to do badly in Senate races this November. They'll certainly win many of the seats just mentioned -- possibly even most of them. But they're clearly starting to take these races for granted. Conservatives haven't woken up in time to stop the various potential trainwrecks in progress here -- Angle, Paul, Rossi, Fiorina. That should make for a good round of finger-pointing if they haven't adjusted their expectations by November.