As oil washes up on Mississippi shores, anxiety seeps into our lives -- and brings back memories of Katrina 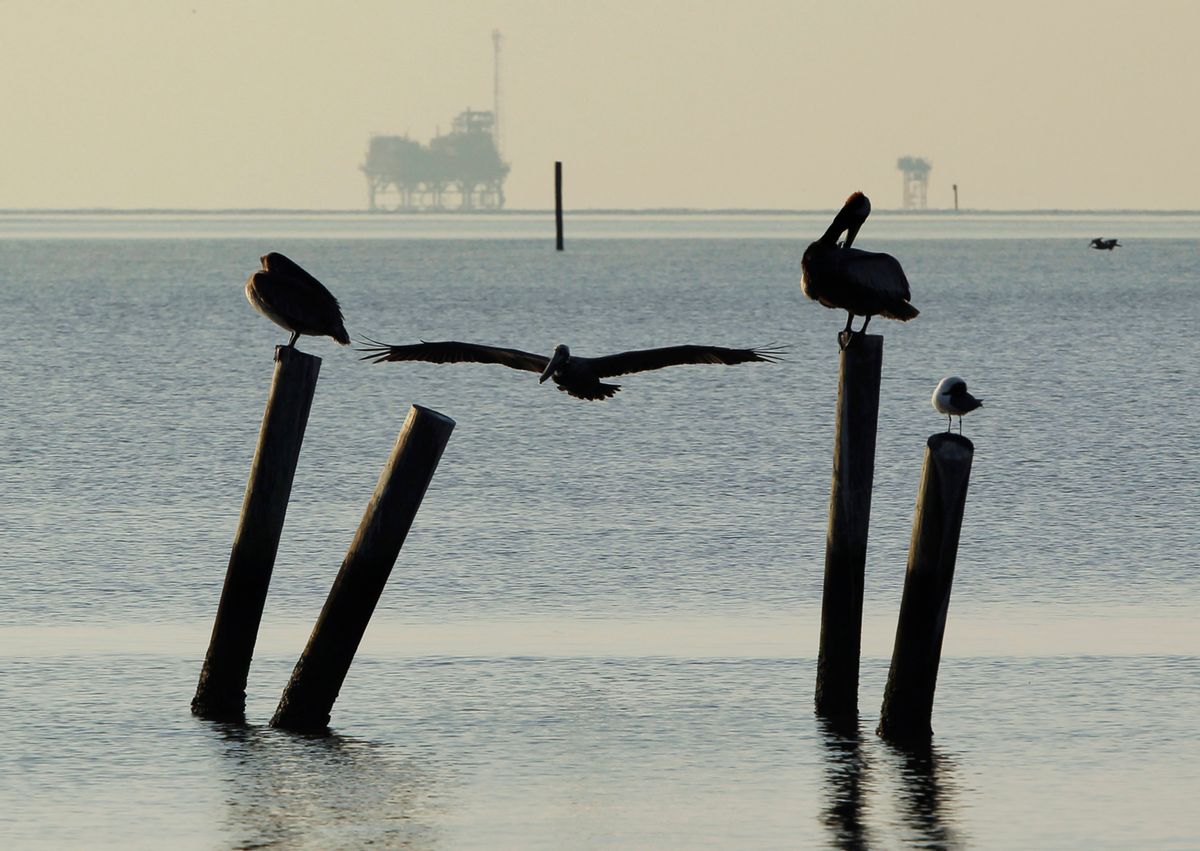 Pelicans sit on pilings along the Dauphin Island Parkway, Alabama May 5, 2010. A flotilla of boats tackled a massive oil slick in the Gulf of Mexico on Tuesday, taking advantage of calm weather to intensify the fight to reduce the spill and limit its impact on the U.S. shoreline. REUTERS/Brian Snyder (UNITED STATES - Tags: DISASTER ENERGY ENVIRONMENT) (Brian Snyder)
--

I first heard the news in a condolence letter. "I just read that the BP 'top kill' efforts to plug the oil spill have failed, and I feel so sad," a friend in Virginia wrote by e-mail.

My stomach clenched into a fist. I read on.

"It must be devastating to face such a crisis again, so soon after Katrina. … The thought of all the waste and destruction, to say nothing of 11 human lives lost, is overwhelming at times. I had a good cry over it last night and am trying not to obsess."

Dear Julia, I'm trying not to obsess either, but I'm not having much luck.

Like most of my friends and neighbors here on the Mississippi coast, I am over Katrina -- or so I'd like to believe. We lived through it, we're rebuilding our lives. Even when the coast was in ruins, our unofficial town motto in Bay St. Louis became "No Whining." We're no "victims." We're a tough bunch.

Yet a few nights ago, I had a nightmare that left me trembling and tangled in the sheets: flames searing the top of the ocean while a machine spewed chemicals. Until Katrina, I didn't know much about post-traumatic stress disorder. Now I understand how harrowing, unwelcome memories can intrude upon your present.

Not everyone around here is as shaken as I am. Some folks go on as if life in our coastal communities is perfectly normal. Shops, art galleries and restaurants keep regular hours, after all. Most of the time, our languid summer breezes carry the scents of jasmine and honeysuckle. Last night, I watched as an osprey dove for prey near the edge of the beach, while flocks of gulls settled on the shallow sand flats for an evening siesta.

But even though the oil hasn't tarred our beaches yet, the effects are apparent. An informal poll of Old Town merchants blames the spill for a radical drop-off in tourism and business. Some afternoons, a petroleum stench settles over this little Mayberry-by-the-Sea. We've been told it's from the burning of the oil, not the spill itself, but that doesn't make relaxing, or breathing, any easier. During one evening beach stroll, my dogs discovered the corpse of a sea turtle, one of hundreds that have washed ashore in the past month. Autopsy reports don't link the oil spill to most of those turtles' deaths, but I'm suspicious: In over 15 years of walking the beaches here, that was only the second dead one I've come across.

As the gusher continues unabated and the first oil begins to wash up on Mississippi shores, however, cracks in our demeanor are starting to show. As we watch heart-wrenching images of south Louisiana, shopkeepers and neighbors complain of being forgetful and tense. Volunteers are frustrated, angry, attending cleanup classes that seem to focus more on protecting BP against further liability than teaching useful mitigation techniques. In a business meeting I attended last week, a brawny newspaper editor finally came out with it: "Hey, we're all depressed about the spill!"

A fellow Katrina survivor confessed she's been plagued by a series of anxiety dreams in which she frantically searches for her children amid chaos. In one of the nightmares, her family is forced to relocate because our town had become "gray, bleak and a no-man's land."

Another hardy woman who rode out the surge of Katrina on the roof of her house pointed out to the gulf as she spoke. "It's almost worse than a hurricane,” she said, shuddering. "It's just lingering out there, like black death."

It's that lingering that's creating anxiety for all of us -- not just here on the coast but everywhere, as we remain trapped in painful "wait and see" mode to find out what the damage will be, how far it will spread, whose lives it will touch.

"We haven't stopped the infliction of the trauma yet," said Raymond Scurfield, a professor of social work at the University of Southern Mississippi Gulf Coast who specializes in post-traumatic stress. "It's still unfolding, and that's almost incomprehensible."

The fact that officials have lied about its effects, the fact that experts can't agree on its magnitude, only makes it worse.

"If you've been through something like Katrina," he said, "the spill seems like déjà vu -- except this is a man-made disaster. Some Katrina survivors are manifesting symptoms like nightmares. Others, I suspect, are cutting off emotions -- using a combination of detachment, avoidance and tunnel vision -- to prevent being flooded with a resurgence of issues.”

Me, I wish I could join the detach-and-avoid group. I actually managed to repress anxiety about the spill for a few days while the top kill was being implemented. We were all so hopeful it would work; even the procedure's name smacked of finality. But with its failure, closure remains elusive. According to some reports, the next tactic -- "cut and cap" -- may actually increase the flood of oil. It could be weeks. It could be months. And until the bleeding stops, how can anyone heal?

A few nights ago, I dreamed that I was standing at the foot of my favorite pier and watching through clear water as a crab scuttled out from its hiding place. It grabbed a black sphere in one claw and even in my dream I recognized it as a tar ball. The crab scooted a few feet across the sandy bottom and lifted up an old oyster shell with its other claw. It tucked the tar ball beneath and dropped the shell on top, hiding it from view.

Out of sight, but hardly out of mind.

Ellis Anderson resided in the French Quarter for two decades before moving full time to Bay St. Louis on the Mississippi Gulf Coast in 1996. Her book, "Under Surge, Under Siege, the Odyssey of Bay St. Louis and Katrina," published by University Press of Mississippi, will be released Aug. 1.