"Hell's Kitchen" screams back to life 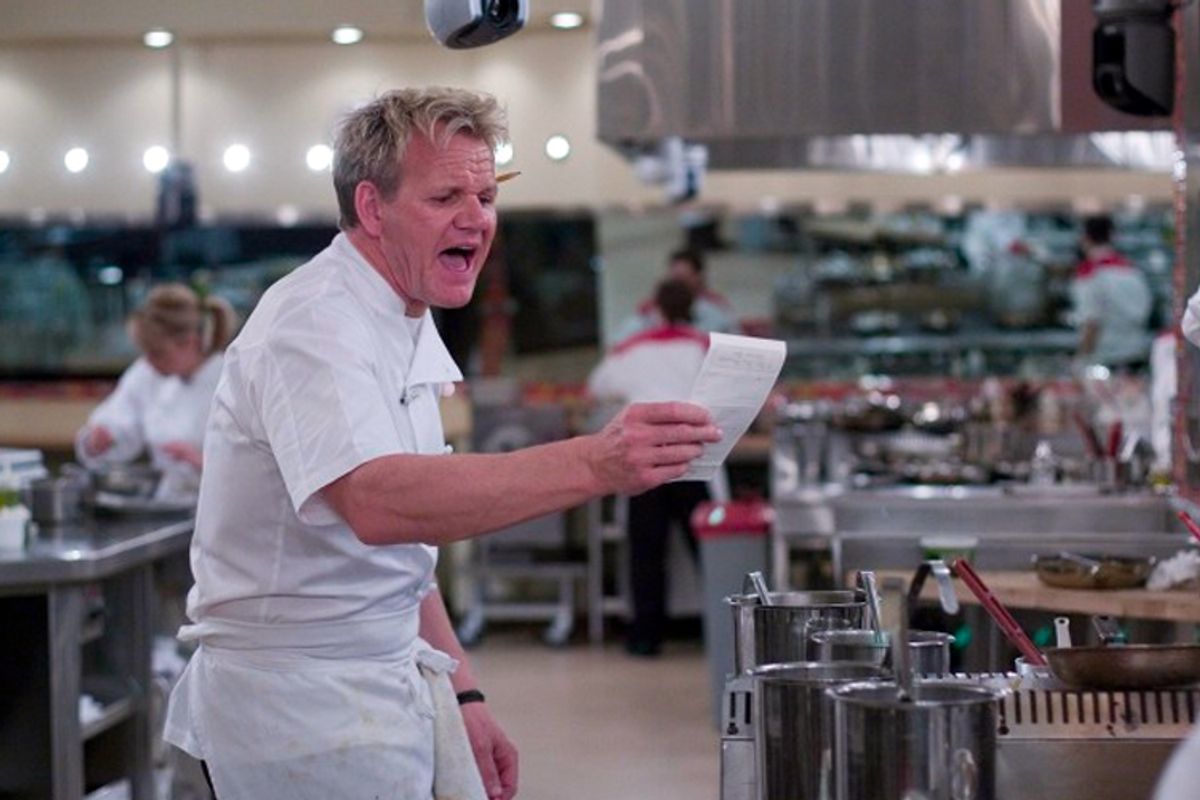 "Hell's Kitchen" returns with a familiar promise: "This is the one you've been waiting for."

Wasn't that what they said last year? I know they need to keep outdoing themselves in order to keep our interest -- after all, the public is fickle and easily displeased, and we want more drama, more surprises, more hysterical cooking! -- but I'll believe it when I see it. Not that I'm expecting to be disappointed. I'm sure there will be yelling this season, lots of it, and bad cooking, and maybe even some good cooking from the chef wannabes, all of them eager to prove that, despite their limited experience, they can cut the mustard.

If only that was all there was to it, cutting mustard, but, alas, risotto seems to be a major sticking point for many of them, and that's just the beginning.

We begin, as usual, with previews of fighting, screaming, temper tantrums, and one aspiring chef saying, "I like winning," as if that's news. Really? Because I'm pretty sure that no one else there does. The contestants are often quite enlightening that way. "I love to cook," one of them will say, because we might not have known that otherwise. Still, what else would they say? What would you say?

I would say nothing because I'm not going to be on the show, which solves that problem nicely.

"I'm here to win 'Hell's Kitchen,'" one says, because, y'know, a lot of people are there to lose.

One contestant, who is quite taken with herself, announces, "I'll look better doing it" (assuming she has to look good to make it) and then she falls down. How ... cute. This is what happens when one wears heels in the kitchen, so one can look good when one falls down.

We start off with a signature dishes -- I like signature dishes. There's no telling what we'll be subjected to here, and surprises are always fun, aren't they? This time, the first contestant, a homemaker who's written a cookbook and has never worked in a restaurant, goes up alone, which should have been our first clue, since they always go up in pairs (one boy, one girl). Chef Ramsay says the veal scallopini she presents looks bad, then tastes it, acting as if he's going to say it's bad, and instead pronounces it quite good. He then hugs the contestant and gives her a kiss on the mouth.

This is unusual. She returns to the line and he follows her, and they kiss some more. Rather unprofessional, wouldn't you say? But (surprise, surprise) it's his wife, disguised with a mousy brown wig. She's not really going to compete, which I think would be really fun, and then she leaves.

The guy who speaks with a heavy Italian accent because he thinks women like it, despite having been in the U.S. for 20 years, does not make his own pasta. What the? Premade pasta? It is not a hit.

Benjamin comes after the Italian guy, and he makes his own pasta. Ha! Take that, Italian guy!

Jamie had a toothpick in her food and Ramsay declined to try it.

The guy who has a large Hells' Kitchen tattoo on his torso (suck up!) comes up with brie stuffed with lobster, and, surprisingly, Ramsay says it's delicious. I don't care who you are, but when you have to show how much you want to win by getting a tattoo, there's a pretty good chance you're a lousy cook.

Based on my somewhat limited experience, of course. I myself have no tattoos.

Again surprisingly, seared ahi in mint leaves works. Who would have ever guessed?

The chicken wings with a half bottle of Tabasco does not, perhaps not as surprisingly, make much of an impact, other than that made when one is desperate for a drink to wash it down with.

Sadly for the women (the red team), the men win. Could this be the start of another season of the men proclaiming their superiority? Men love to do that. So do women.

Then the alarms start to go off. Each time, everyone must go downstairs to watch a video Ramsay has made of how to prepare [fill in the blank]. Lobster risotto first, which is always the high point of the show. "You've burned the risotto!" "This risotto is hard!" It's fun to see how many different ways it can be screwed up.

The video lessons continue through the night. This is new -- let's see how they do with no sleep! People with sharp knives and no sleep are bound to make an impact.

The red team (aka, women) have to serve breakfast in bed for the guys just because the red team lost the signature dish challenge. They are unhappy about this and the men are quite happy.

And then Hell's Kitchen opens. The lights! The cameras!

Raw scallops, seasoned badly. Stacey thought it was going to be easy, as aspiring chefs so often do. I'm sure she cooks just fine at home, in her own kitchen.

The "perfect" potatoes are either undercooked or overcooked.

Crab in the lobster risotto!

So far, we're having nothing but disasters in the kitchen. Is nothing coming out right?

And Ramsay does his first ejections of the new season! "You, you, you out!" Such authority! There was too much laughing going on, and how can someone not know the difference between crab and lobster?

Mikey serves raw halibut. Again and again. Does the halibut trick him by whispering, "I'm done, I'm done," in the sort of hypnotic, entranced voice only halibut can do? It appears so, for Mikey just can't get the hang of actually cooking the halibut.

Does anyone really want to eat in this "restaurant"?

Two guys are thrown out of the kitchen next.

And then another from the red team is ejected.

And more raw halibut. Halibut apparently presents quite a challenge and Mikey too is sent away.

One important lesson to keep in mind should you dine at Hell's Kitchen: Eat first, and eat well, because it may be your only chance to eat. Unless you eat afterward -- you can always stop off somewhere on your way home. McDonald's is bound to be open.

Finally food is leaving the kitchen. Only by sending half the aspiring chefs away were they able to finish service.

The losing team is, of course the red team. Who couldn't see that coming? They "sucked," as Ramsay says.

And now the time we all look forward to: elimination!

This is when the team members get to attack each other in order to save themselves.

Stacey was the first nominee, and then, before announcing the second one, we cut to commercial. We always cut to commercial at this time because we're supposed to be eagerly waiting the announcement. We're supposed to be hanging on the edge of our seats, but frankly, this is the first episode and I'm not all that invested in it yet. Maybe later. But right now, I'm not taken with any of the contestants. They're all blank slates, and any one of them could go without affecting me at all.

Fran is the second nominee. She was kicked out of the kitchen before she had a chance to really screw up other than not knowing the difference between lobster and crab. "I was a kosher chef," like that's an excuse. Really? She thought she could just show up and it wouldn't matter that she doesn't know the difference between crab and lobster? Given how often lobster appears at Hell's Kitchen you'd thinks he would have prepared for that eventuality. Then again, I'm a crab expert, I like to think, so the idea that someone can't tell the difference is beyond me.

Stacey said she could care "more than you can even imagine."

And then Ramsay makes his decision: Stacey, the private chef, is out. How humiliating, not to even make it through the first episode. We see her trudge away, defeat in every step.

Next episode preview: Shocking events have Ramsay in a rage! But, when is he NOT in a rage? This is standard operating procedure for the chef, so it's not as if this is anything new. Yet, I'll tune in, because I want to see what invokes his rage this time. I want to see people, some of whom I wouldn't trust to make me a bowl of cereal, try to cook their way to acclaim and greatness. And I want to sit at home and say, "Cripes, people, even I could cook that!"

Monique Colver is currently working on a memoir about her husband's struggles with mental illness.