A green light for new wells in the Gulf?

MMS gives the go-ahead for more offshore drilling, even as the president calls for a clean energy future 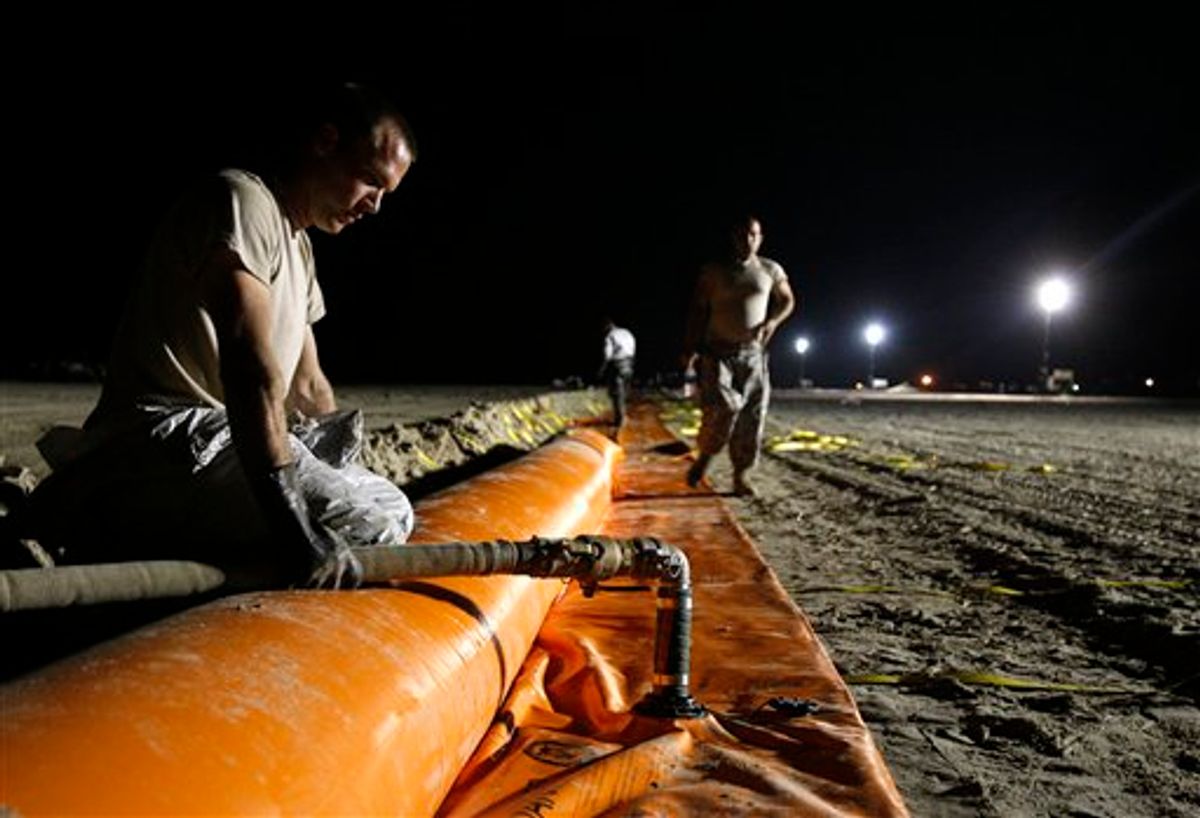 Louisiana National Guard Sgt. Chad Birch, left, fills up a tiger dam with water under floodlights on a beach in Grand Isle, La., Tuesday, June 1, 2010. The National Guard is working around the clock to complete the dam, which is designed to protect the island's entire shoreline along the Gulf of Mexico from oil from last month's Deepwater Horizon oil rig explosion. (AP Photo/Patrick Semansky) (AP)
--

What's wrong with this picture?

On Wednesday, President Obama visited Carnegie-Mellon and gave a speech calling "for this nation to embrace a clean energy future."

The gulf disaster, he said, "may prove to be the result of human error -- or corporations taking dangerous short cuts that compromised safety," but the nation "must acknowledge that there are inherent risks to drilling four miles beneath the surface of the Earth, risks that are bound to increase the harder oil extraction becomes."

On the same day, however, the AP reports, the Minerals Management Service gave a green light to the first new Gulf of Mexico oil well since Obama ended a brief three-week moratorium on drilling in shallow water.

The Minerals Management Service granted a new drilling permit sought by Bandon Oil and Gas for a site about 50 miles off the coast of Louisiana and 115 feet below the ocean's surface. It's south of Rockefeller State Wildlife Refuge and Game Preserve, far to the west of the Deepwater Horizon oil rig that triggered the BP spill.

Obama last week extended a moratorium on wells in deep water like the BP one that blew out a mile below the surface in April and is gushing millions of gallons of oil. But at the same time, the president quietly allowed a three-week-old ban on drilling in shallow water to expire.

Environmentalists are predictably outraged, and it's easy to see why. Just the symbolism of a new well off the shores of Louisiana, even as the worst oil spill in U.S. history continues to spread, is hard to swallow. But the move also underlines a significant point -- one accident, no matter how horrific, isn't going to end offshore oil drilling, everywhere, for all time. But if exploited properly, the disaster could help get an energy bill passed.

At Carnegie-Mellon, Obama said "The votes may not be there right now, but I intend to find them in the coming months." Making sure the president sticks to that promise is where pressure must be applied, instead of in the service of the pipe dream of a total offshore oil ban.

UPDATE: On Thursday, the Minerals Management Service reversed itself and reinstituted a complete ban on all new drilling in the Gulf.