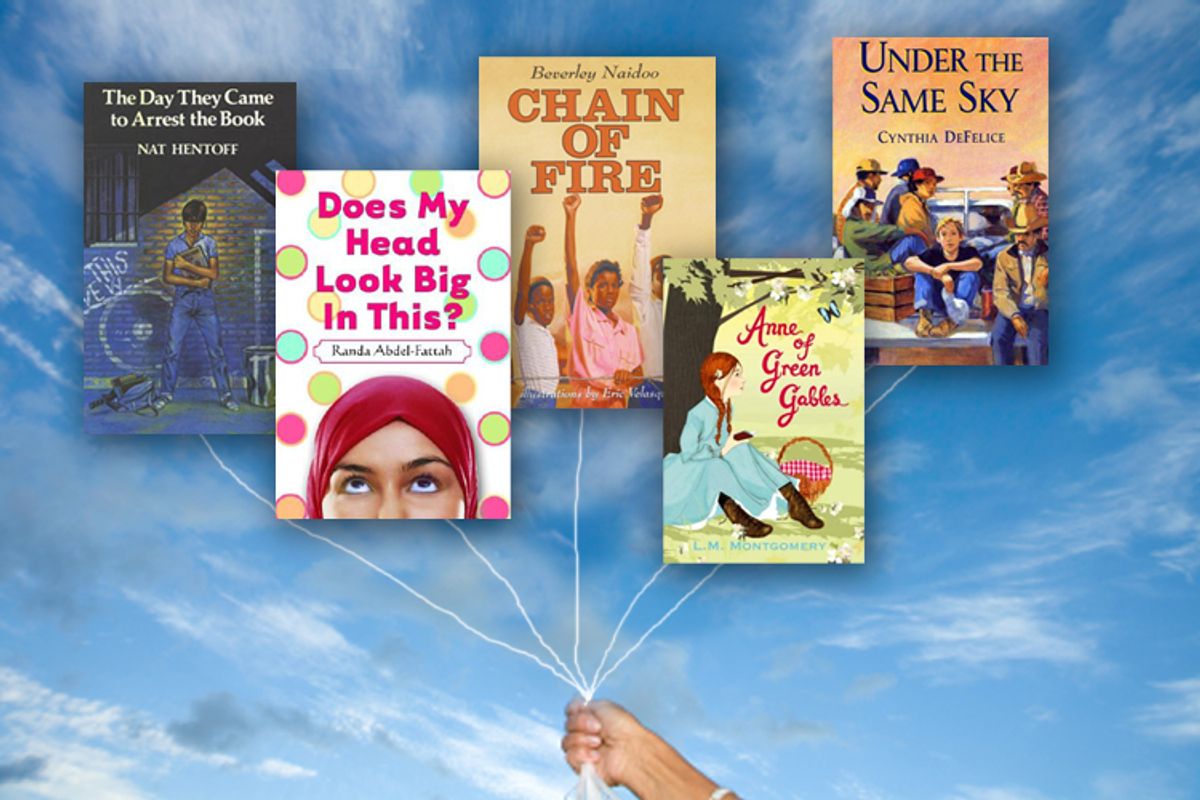 If you’re looking for summer reads that will give your child entertainment with a side of social awareness, take a gander at these books that offer nuanced takes on important issues.

While working on his father’s farm, Joe learns about the prejudice and hardship that immigrant Mexican workers face. He discovers that some of the laborers are illegal, but also that many of the immigration laws are flawed. When he sees his deeply principled parents bending the rules for them, he starts to realize that sometimes people have to negotiate their own terms of justice.

DeFelice teaches her reader that the inequalities in labor and wealth distribution are almost impossible to remedy as long as the societal structures support them; and that, ultimately, when the standard ones fall short, people have to live by their own laws.

In "Chain of Fire," Naledi and her friend Taolo protest the injustice of apartheid in their South African community. Taolo perfectly captures the arbitrary nature of racism in the following speech on apartheid: "They take six pieces of land ... Then they say, 'These pieces aren’t South Africa anymore' ...  Any fool can see how they want to split us up ... keeping us apart so they can control us! Divide and rule!"

In the end, Taolo and Naledi reveal that a combination of making people aware of prejudice, and showing them that it's their responsibility to do something about it, is the strongest means of effecting social change.

In "The Day They Came to Arrest the Book," Hentoff explores the tension between freedom of expression and the consideration of personal feeling. The debate breaks into two groups -- those who want to take "The Adventures of Huckleberry Finn" off the curriculum because they find it racist and sexist, and those who want to keep it in because they believe that censorship is wrong.

As a result of Hentoff’s multifaceted treatment of the debate, there is no absolute sense of right or wrong in the book. Although the issue is a complicated one, the novel implies that it is not the role of educators to cut their students off from knowledge, but rather to guide them through all sides of an issue and help them formulate their own opinions.

In "Does My Head Look Big in This?," Abdel-Fattah argues for the acceptance of different cultural/religious practices. Her protagonist, Amal, describes herself as "An Australian-Muslim-Palestinian ... whacked with some seriously confusing identity hyphens." A very mature young lady, Amal deals with her mixed cultural heritage with humor and dignity. She also makes the life-changing decision to wear the hijab (a head scarf worn by Muslim females) to her predominantly white prep school where it's frowned upon.

Abdel-Fattah does an excellent job of debunking many of the misconceptions surrounding Muslim women. Contrary to what others might think, for Amal the hijab is not an oppressive symbol, but a liberating one. Abdel-Fattah examines the challenges that arise when a woman doesn’t want to be saved from those who misunderstand her condition. Interestingly, Amal’s quest to get in touch with her religious and cultural roots leads her to feel increasingly comfortable with her hybrid cultural identity.

L.M. Montgomery’s Anne embodies an interesting brand of feminism that teaches young women that they don't have to change to fit a world that doesn't accept them, or even just wait for that world to change -- they can reconfigure it themselves. Through her powers of imaginative transformation, Anne creates the world in which she has always longed to live.

Yet the book’s characters are not the only ones whose outlook Anne changes. Anne’s attitude is so infectious that it reaches even her readers -- reminding them that they, too, can change the world around them.