Midlife crises, unplanned pregnancies, coming out -- Showtime's dramedy tackles them all with sweetness and soul 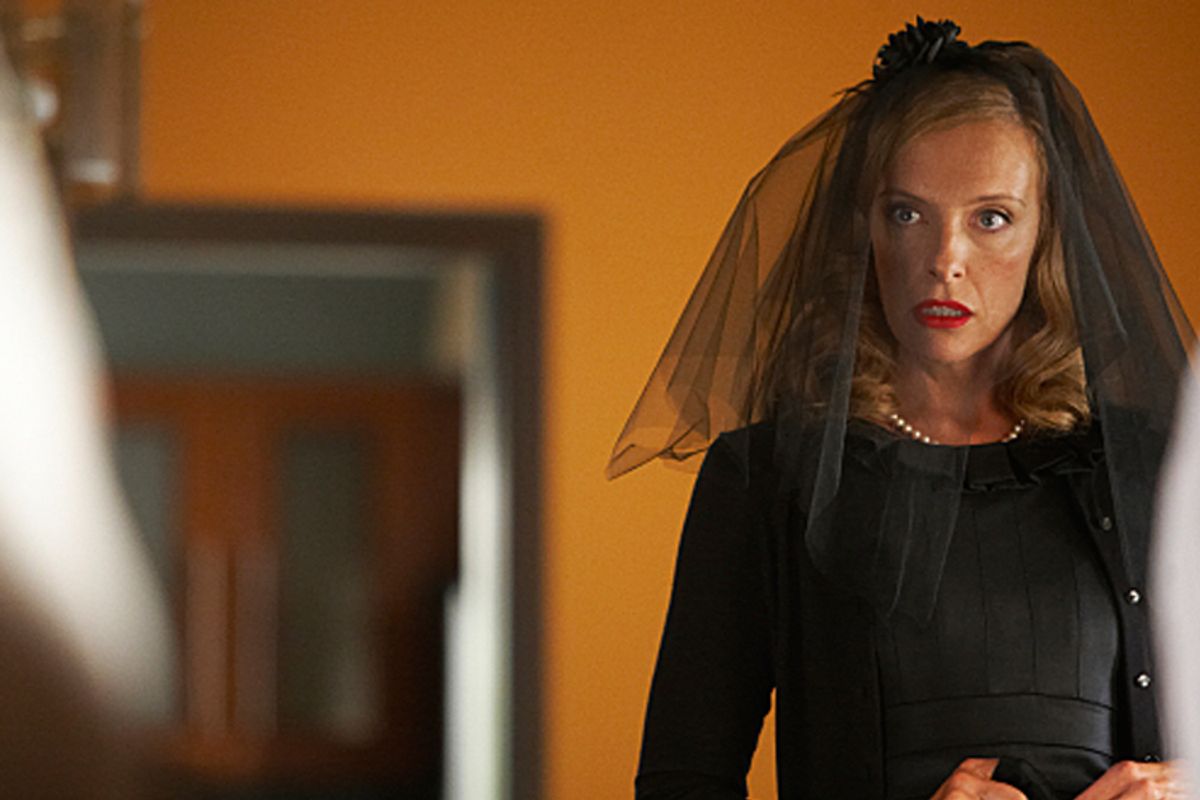 If you've ever been fired, dumped, evicted or displaced, you know how a sudden shift in your circumstances can rattle your sense of identity in unexpected ways. You never know what grounds you until the ground beneath you disappears. Without that job title, will you have the same bluster? In a different house, on a different street, will you still feel at peace with yourself? Without your boyfriend or your wife, without regular calls from this friend, will you still feel sure of yourself? We'd all like to imagine that we're confident enough to forge through the world without status or support, but the truth is a different story. Maybe becoming a mature adult means understanding what makes us happy, what keeps us alive, and what might be holding us back.

This search for identity and happiness takes center stage in the second season of Showtime's "United States of Tara" (finale premieres 10:30 p.m. Monday, June 7), from Tara (Toni Collette) herself, who's starting to discover that merely being healthy isn't enough for her, to Max (John Corbett), who's thrown himself into such a supporting role with Tara that he can't remember what he wants anymore. Meanwhile, Marshall (Keir Gilchrist) is grappling with his gender identity while Kate (Brie Larson) searches for some meaningful life after high school.

Whether or not these characters succeed at finding themselves, "United States of Tara" certainly has, digging into the emotional whiplash of modern adulthood in bold, smart new ways this season. Instead of treating Tara's alters (or alternate personalities) as the main attraction, the writers have begun to dig into a richer, more thoughtful exploration of identity: How do we define ourselves? How do our surroundings and circumstances define us?

The biggest surprise this season may be Max (John Corbett), Tara's husband, who, after playing the blandly supportive spouse through the first season, has finally started to freak out in earnest over the never-ending nightmares of being married to an army of different personalities. Max may have been comfortable playing the good guy when Tara was sick, but when she seems healthy but still acts selfishly, he reaches his limit. Max has spent so long defining himself as the giving husband that he's not sure how to behave when he's got a legitimate reason to be pissed off. Even when one of Tara's alters, Buck, ends up having an actual relationship with a local bartender, Pammy (Joey Lauren Adams), on the sly, Max takes his anger out on a shady contractor instead of confronting Tara. Later, as he scurries around cleaning the house before a visit from Social Services, Tara traipses in with Lynda (Viola Davis), the artist whose friendship Tara stole from her daughter, Kate, and engages in a meandering conversation. Suddenly those years of giving up a normal life to take care of her start to look like masochism to Max. And even as Max is doubting their bond, Tara has the audacity to suggest that he might not have stayed with her if not for her illness.

Such is the boldness of middle-aged people, pushing on the walls around them to see if everything will cave in. The problem with speaking such big, ugly questions out loud is that they echo around, begging for an answer. Suddenly Max has to ask himself what he wants -- something he's obviously avoided doing for years. As long as Tara is wandering off, trying to find her most authentic self, why can't he? The trouble that's stirred up when these two stop sacrificing everything to keep the family together captures the perfect snapshot of the midlife crisis.

But this is the glory of "USOT" in its second season: Instead of devolving into the sort of weightless, farcical domain that's all too common in half-hour cable dramedies, this show stopped using Tara's alters to inject a little action into the story and started using them to add new layers of depth and understanding to the mysteries and character conflicts already in play. When Shoshanna, Tara's latest shrink alter, shows up and asks Max how he feels about "all of this" she presents something irresistible: An alter who's wiser and calmer than Tara herself. Max finds himself soothed by her presence, even though he knows it's absurd of him to feel that way.

Their daughter, Kate, is on her own solitary search for meaning, albeit a somewhat haphazard one. Her attempt to find a reasonably interesting pursuit after graduating from high school first lands her a job at a debt collection agency, then brings her into the company of Lynda. When her friendship with Lynda is usurped by Tara, Kate retreats to her room, dressing up as Valhalla Hawkwind (Lynda's cartoon character) and engaging in mildly pervy acts -- sitting on balloons and layer cakes! -- for strangers on the Internet. While Kate doesn't see herself as someone who needs saving, her new paramour Zach (Seth Gabel) wouldn't mind casting her in that role. It was brilliant of the writers to present Kate with this hero -- handsome, interested, supportive and rich – who has the power to throw all of Kate's dreams out the window in one fell swoop. This is the perfect subplot for a compact show like "USOT" – it's satisfying to see Kate get a little attention from someone mildly more deserving than a manager at Barnaby's, but it's also riveting to try to figure out what's wrong with this guy (because something has to be wrong with him). Somehow, even as he arrives fully prepared to deliver Kate from the messiness of her family ties, it's tough to believe that Valhalla Hawkwind will be swept away quite so easily.

Tara's sister Charmaine (Rosemarie DeWitt), on the other hand, is more than ready to ride off into the sunset with whatever prince will have her. Nick (Matthew Del Negro), like Zach, is just what the doctor ordered: stable, handsome, kind. But are Charmaine and Nick a real pair, do they actually have good conversations or even meet each other's gaze? Unlike Charmaine and Neil (Patton Oswalt), they don't seem to have much of a rapport. Charmaine reacts to the sinking realization that Nick is all wrong for her in slow motion. Instead of shoving her big foot into the glass slipper like Cinderella's stepsister, screeching, "I'll make it fit!" Charmaine unravels gracefully, almost. It's as if she enters some state of suspended animation, in which the world acts on her and she merely floats along, not entirely connected to the events unfolding around her. By the time she discovers that her baby is Neil's, not Nick's, she relays this information to Tara casually, as if she's talking about one of the amusing but not all that important events of her day. Rosemarie DeWitt brings Charmaine so much awkward, needy longing that your heart aches for her whenever she's on-screen (unless she's talking to Max alone, and then she's just flirtatious and gross). What's really been rewarding this season is that Charmaine grew from a "Wheee, wedding!" cartoon princess to a wiser, more mature adult. Not that Charmaine is anything approaching wise or mature, mind you. But somehow, since she became pregnant, she's more pragmatic and able to look directly at the truth, maybe for the first time in her life.

And then there's Tara's son, Marshall, whose process of coming out of the closet has been the most genuine, sweet and also disastrously awkward affair that can be imagined, which is to say it's one of the most realistic depictions of sexual awakening to appear on the small screen. Keir Gilchrist is delightful as Marshall, and every single scene between him and his new boyfriend Lionel (Michael J. Willett) has been spot-on, funny and riveting.

What's really remarkable about this second season of "United States of Tara" is that Diablo Cody and the other writers have managed to create stories around a tight theme -- identity crises and the search for a true self -- while continuing to reveal new dimensions of the show's characters. It's worth noting that two of the show's writers, Jill Soloway and Craig Wright, also wrote for "Six Feet Under," because many of this season's finest moments (Marshall and Lionel go cruising in the park, Kate meets Lynda for the first time) echo the intelligent, soulful spontaneity that was "SFU's" trademark.

It's wonderful to watch as a show like "United States of Tara" finds itself, dodging the skin-deep curse of the half-hour dramedy ("Californication" anyone?) for something a little more substantive and weighty. By setting aside the flashy antics of Tara's alters and focusing on the deeper challenges faced by all of the characters on the show, "United States of Tara" has matured into a sweet, largely gimmick-free exploration of the trials and tribulations of growing up. Because, whether you're a wise teenager or a hopelessly immature middle-aged parent, you probably still have a lot of growing up to do.