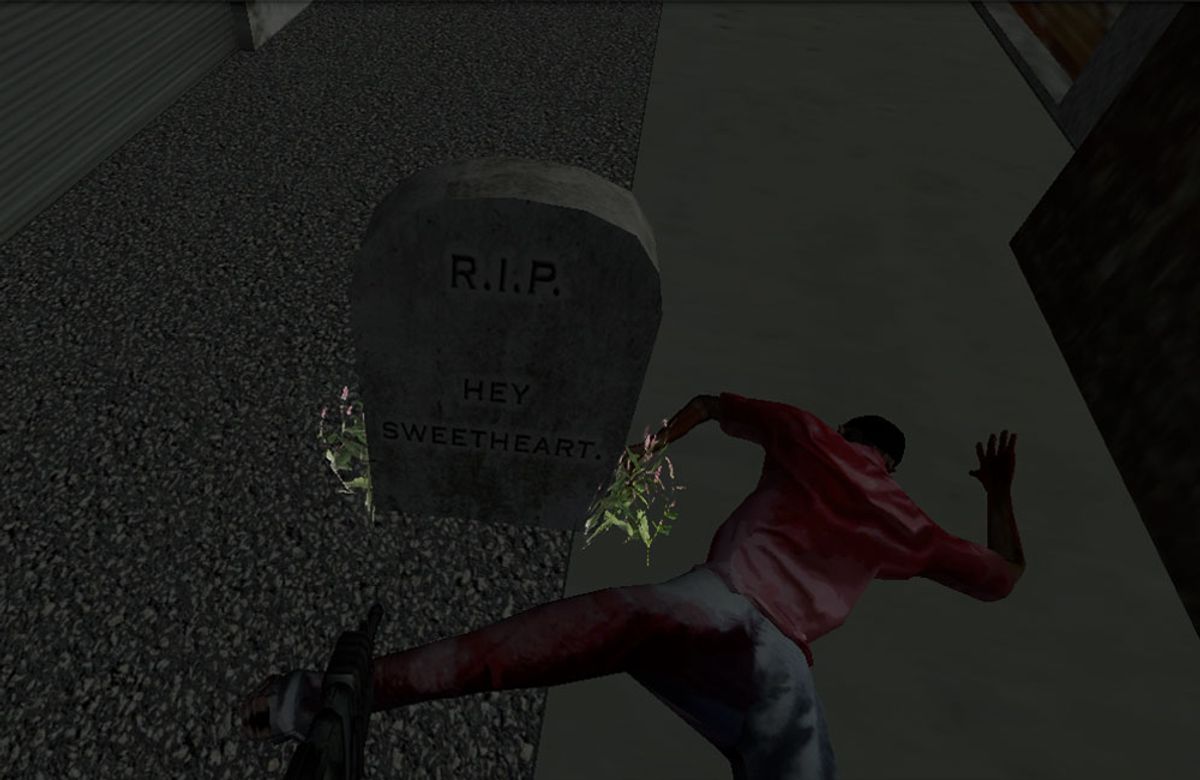 It is a beautiful day -- the sky is a crisp blue, the birds are singing and the sound of an ice cream truck floats through the air. Suddenly, I'm approached by a young man in a T-shirt and shorts. "I like your bounce, baby," he purrs. Then an older man comes up on my left: "Very attractive," he says. Before I know it, there's a third perv leering behind me. So, I take out my machine gun and shoot them all dead. Alongside their bloodied corpses, gravestones rise up reading "R.I.P.," followed by their catcall of choice.

This is life on the streets of "Hey Baby," a new first-person shooter game by -- wait for it -- LadyKillas Inc. Players wander around a virtual downtown while being confronted by zombie-like men who say everything from "nice legs" to "I wanna rape you, bitch," and you have the option to either shoot them (your gun is constantly at the ready) or "shower them with love" (hearts fall from the sky to minimal effect). The game's official website makes it clear that revenge is the true aim: "Ladies, are you sick and tired of catcalling, hollering, obnoxious one-liners and creepy street encounters? Tired of changing your route home to avoid uncomfortable situations? IT'S PAYBACK TIME, BOYS." To be clear, by "payback time," they mean "time to have your bodies riddled with bullets."

Clearly, the game isn't afraid to stir up some controversy. We're used to heroines with big boobs and naughty little getups, but here we're placed in the shoes of a virtual protagonist whom we never actually see. Instead of a far-fetched scenario, we're placed in an infuriating and frightening everyday reality for many women. Show me a woman who doesn't have at least one story of being aggressively pursued -- verbally or otherwise -- by a stranger on the street. Most of us have experienced the jolt of adrenaline from receiving unwanted, unrelenting attention from a man on the street, or have been forced to contemplate the relative merits of pepper spray, eye-gouging and a swift knee to the crotch. There is a real reason for sites like Holla Back, which provides a venue for women to vent about, and publicly humiliate, men who have harassed them.

The rage behind the game might be a little too real for some tastes, but there's no question many women will find it thrilling, maybe even therapeutic. Personally, I can't say I'm particularly fond of the "all men as potential attackers" mentality that the game engenders, even if it does make for interesting commentary about the ways street harassment warps women's views of men. Ultimately, though, considering the existence of first-person sexual assault games like "RapeLay," it's about damn time someone introduced a street harasser shoot'em-up game.