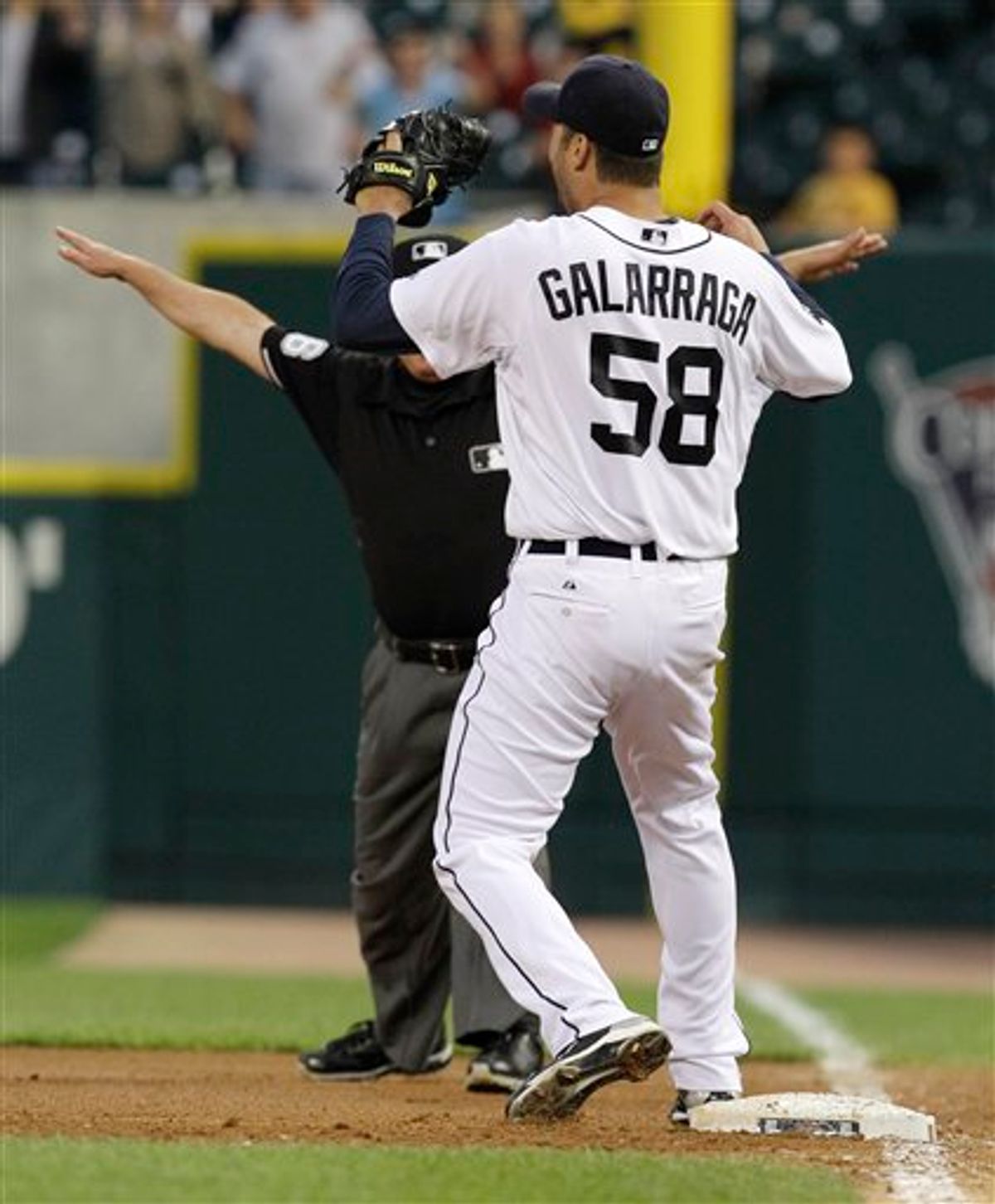 Commissioner Bud Selig has the power to reverse umpire Jim Joyce's missed call that came with two outs in the ninth inning Wednesday night in Detroit. Joyce ruled Cleveland's Jason Donald safe, then admitted he got it wrong.

Selig would likely consult with his top advisers before making such a ruling. St. Louis Cardinals manager Tony La Russa says the call should be overturned.

Tigers manager Jim Leyland said MLB gave Joyce the option to not work Thursday's game between Detroit and Cleveland, but Joyce chose to stick with his job behind the plate. Leyland added that Galarraga would present the lineup card and shake hands with Joyce at home plate before the afternoon game.

In 1991, a panel headed by then-commissioner Fay Vincent took a look at the record book and decided to throw out 50 no-hitters for various reasons.

The instantly infamous play, which had social networking sites all abuzz, will add to the argument that baseball needs to expand its use of replays. As of now, they can be used only for questionable home runs.

Galarraga bitterly sipped a beer minutes after the blown call negated his place in baseball history. An apology and hug changed his attitude.

Joyce, in tears, asked for a chance to apologize after the Tigers beat the Indians 3-0.

"You don't see an umpire after the game come out and say, 'Hey, let me tell you I'm sorry,'" Galarraga said "He felt really bad. He didn't even shower."

Galarraga, who was barely known outside of Detroit a day ago, and Joyce, whose career had flourished in relative anonymity, quickly became trending topics on Twitter. At least one anti-Joyce Facebook page was created shortly after the game ended and firejimjoyce.com was launched.

"I worked with Don Denkinger, and I know what he went through, but I've never had a moment like this," Joyce said.

Denkinger didn't have to deal with the wrath of fans on Twitter or Facebook. Denkinger helped tilt the 1985 World Series by blowing a call as a first base umpire, and that followed him throughout his career.

Joyce has been calling balls and strikes and deciding if runners are out or safe as a full-time major league umpire since 1989. He has been respected enough to be on the field for two World Series, 11 other playoff series and a pair of All-Star games.

A split-second decision he made will probably haunt him for the rest of his career.

Joyce emphatically signaled safe when Cleveland's Jason Donald clearly didn't beat a throw to first base for what would've been the last out in Armando Galarraga's perfect game for the Detroit Tigers, setting off a chorus of groans and boos that echoed in Comerica Park.

Chuck Klonke, the official scorer Wednesday night with nearly three decades of experience, said he would not change the disputed play to an error from a hit to give Galarraga a no-hitter.

"I looked at the replay right after it happened, and Miguel Cabrera made a good throw and Galarraga didn't miss the bag so you couldn't do anything but call it a hit," Klonke said Thursday morning. "I watched the replay from the center-field camera, which some people thought showed Galarraga might've bobbled the ball, and I didn't see it that way at all. I have 24 hours to change a call, but I wouldn't consider it.

The story has transcended sports, becoming a topic on NBC's "Today" show Thursday morning and among parents dropping off their kids at the bus stop.

It's rare for an umpire to acknowledge a mistake in one of the few sports that relies heavily on the human eye, but Joyce did to reporters and later to Galarraga.

"It was the biggest call of my career, and I kicked the (stuff) out of it," Joyce said, looking and sounding distraught as he paced in the umpires' locker room. "I just cost that kid a perfect game."

Leyland was livid during the game when he charged out of the dugout to argue the call and got in another heated discussion with Joyce after the final out.

Later, though, Leyland tried to give Joyce a break.

Galarraga tried to calm his nerves with a beer after the game after almost getting to celebrate the first perfect game in franchise history.

He was vying for the third perfect game in the majors this year, including Roy Halladay's gem last Saturday night. He seemed to do his job for the 27th out along with first baseman Cabrera on a play teams work on often in spring training.

Donald hit a grounder in the hole between first and second, Cabrera fielded it and threw to first, where Galarraga caught the ball at least a step ahead of Donald, replays showed.

Cabrera said he didn't want to talk about it and Donald answered questions from reporters after a long soak in the tub.

"I didn't know if I beat the throw or not," Donald said. "But given the circumstances, I thought for sure I'd be called out."

The Tigers huddled around one of the two big-screen televisions in their clubhouse, standing stoically and silently as the play was shown over and over.

"I know I played in a perfect game," Detroit shortstop Ramon Santiago said. "In my mind, on June 2, Armando Galarraga threw a no-hitter. I'm going to get a ball signed by him."