The right price for BP's disaster

Bring on the lawyers! Suing BP won't plug the leak, but it may make other oil companies think twice about risk 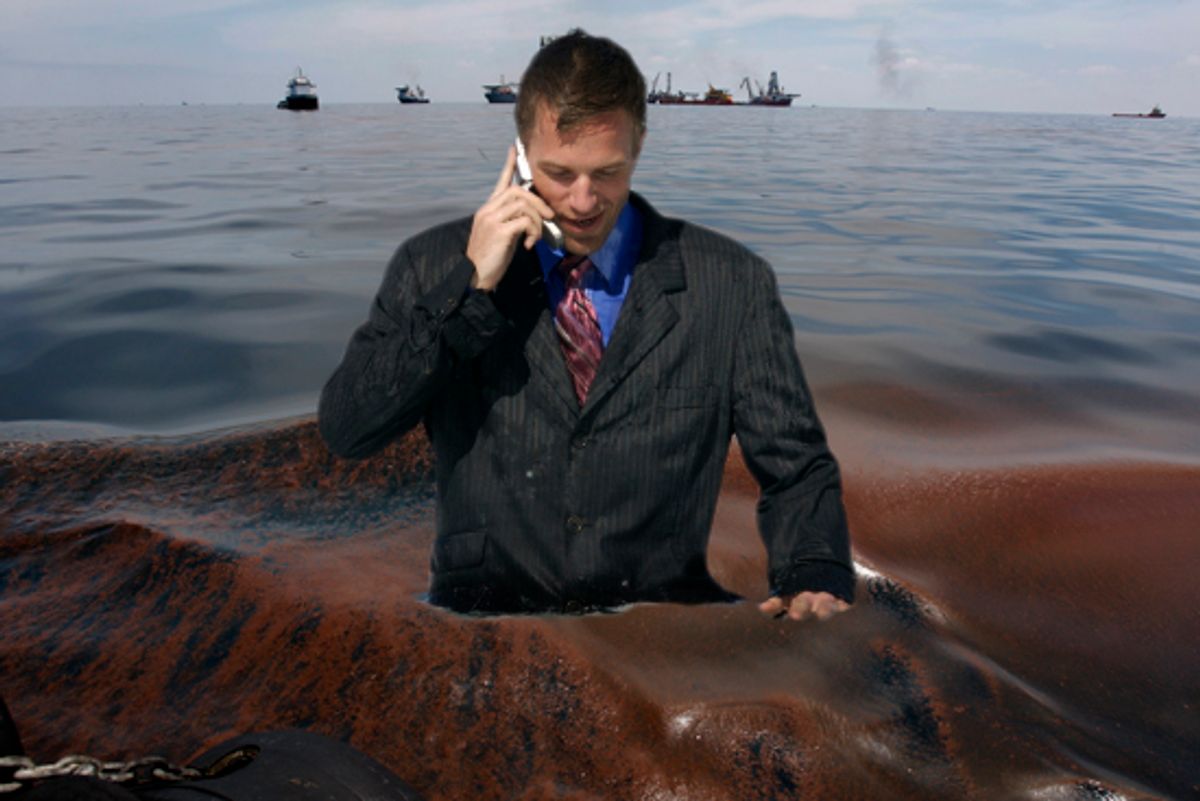 Dispersed oil caught in the wake of a transport boat floats on the waters of the Gulf of Mexico close to the site of the BP oil spill as Discoverer Enterprise drill ship is seen on the horizon approximately 42 miles off the coast of Louisiana May 18, 2010 REUTERS/Hans Deryk (UNITED STATES - Tags: ENVIRONMENT DISASTER ENERGY BUSINESS) (Â© Hans Deryk / Reuters)
--

What is to be done with BP? Will accelerating financial costs -- one recent estimate now tags the total liability at $37 billion, which is beginning to enter the realm of real money, even for a major oil company -- force CEO Tony Hayward to sell off the company's prized assets, possibly to the Chinese? Or has the firm become a takeover target, destined to be carved up by its competitors? And what about the accumulation of lawsuits? Where will that end?

BP has few friends at the moment, but back in its home nation, the Evening Standard (via IPEzone) kicked off an editorial on the oil spill with a provocative slap at U.S. culture that ended up coming halfheartedly to the defense of the beleaguered oil company.

The US government's decision to bring criminal charges against BP as a result of the oil spill in the Gulf of Mexico is a characteristically American reaction to a crisis: if something goes wrong, sue. [But] ... Bringing criminal charges against company executives will do nothing to add to the urgency with which BP is attempting to put matters right.

The editors go on to bewail the terrible impact that government criminal proceedings will have on BP stock values:

One in every six pounds that UK institutions earn in dividends is derived from BP: a reduction will have a direct, adverse effect, not just on fat cats, but on British pensioners. This is bad for all of us. We can understand American anger at this environmental and human catastrophe but the punitive approach to BP will help no one.

I pity the poor British pensioner, but the Evening Standard is categorically wrong. Yes, bringing criminal charges against BP will do nothing to plug the oil leak any faster. But the avalanche of legal actions, both private and public, do offer some hope of helping us avoid the next such disaster. If causing one of the worst environmental disasters in U.S. history proves to be so financially costly that BP no longer continues to exist as an independent company, perhaps other oil companies will think twice before cutting corners on safety to boost profits.

We don't know yet, for sure, the exact chain of events that led to the Deepwater Horizon catastrophe, and it is remotely conceivable that the disaster may turn out to be "just an accident" -- a chain of awful goofs and incompetence. But there is also accumulating circumstantial evidence that some of the operational decisions on the oil rig were motivated by cost concerns. The rig cost BP a million dollars a day to lease; BP naturally wanted to minimize that expense. The tradeoffs involved with conducting extra tests or more time-consuming cementing procedures are no doubt considered and weighed on every offshore oil rig, every day. Given BP's abysmal safety record compared to other oil majors, there is reason to believe that the corporate culture at BP might have been relatively more inclined to give short shrift to safety, but let's not kid ourselves: Something like this was bound to happen somewhere, and anyone could have been the culprit. Deepwater oil drilling is inherently risky and government regulation was pathetically lax. In that kind of environment, with oil companies effectively self-regulating, the temptation to maximize revenue by ignoring or downplaying risk is effectively irresistible.

One way to change that dynamic is to have effective regulation. Another is to ensure that egregious violators no longer exist. If the courts determine that BP's cost-cutting decisions qualify as negligence, the final price might end up being too high for the company to pay. That would be too bad for British pensioners and BP executives, but it will be good for the rest of us. BPs competitors would be sure to take notice. In fact, I will bet right now that any "arguments" over how to proceed with daily operations on currently operating rigs have already been influenced by BP's "accident."

The Evening Standard's poke at American litigiousness is disingenuous and juvenile. When 11 people die in a disaster of such a scale, there is bound to be a criminal investigation. It is hard to imagine, for example, that provisions of the Clean Water Act (which, as the Christian Science Monitor points out, "mandates both civil and criminal penalties for violations"), the Oil Pollution Act and the Endangered Species Act haven't been violated.

So go ahead. Sue their pants off. Put some executives in prison. Punish the company so hard that its brand vanishes from the face of the earth. Like the Chinese proverb goes, sometimes you have to kill the chicken to scare the monkey. The industry needs a wakeup call. Safety first, or go directly to jail.

And while we're at it, can't somebody make a law stipulating that excessive emissions of carbon dioxide are a crime, too. That might help.