Salon talks to the former ambassador, who survived Israel's deadly raid of a humanitarian flotilla on Monday 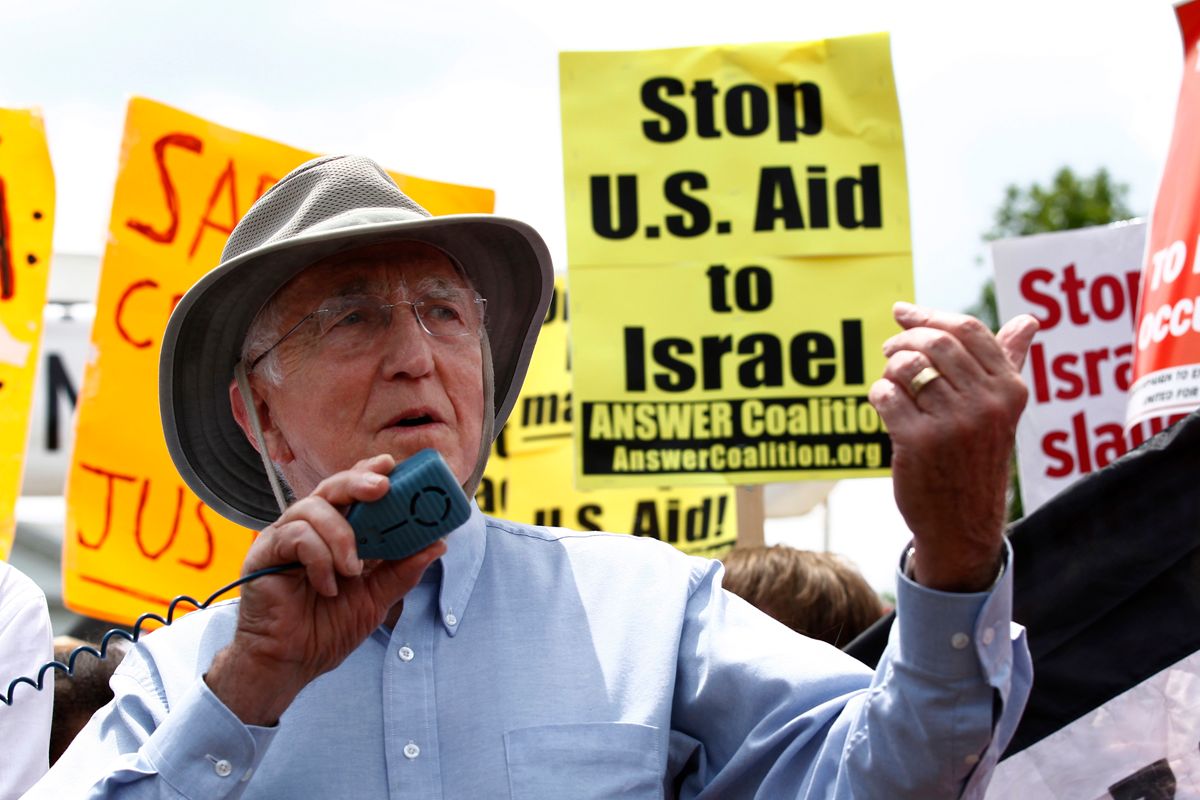 Edward Peck, a former U.S. Ambassador to Mauritania, speaks to demonstrators in front of the White House in Washington June 1, 2010 about his experience aboard a Gaza aid ship as that was seized by Israeli commandos. Peck was sent back to the U.S. by Israeli authorities. REUTERS/Kevin Lamarque (UNITED STATES - Tags: POLITICS) (Â© Kevin Lamarque / Reuters)
--

Edward Peck, a career foreign service officer and former ambassador, was with the Gaza-bound humanitarian flotilla that was raided by Israel on Monday. He was detained by Israel, processed and expelled from the country. Now back in the United States, he spoke with Salon on Thursday.

What do you think of the American media coverage of this event?

Here's the thing. I just got off a radio interview. One of the things that distresses me is the extent to which Israel has been successful in, for example, getting Americans to ask questions as to why the passengers on that big Turkish ship attacked the Israeli soldiers.

I said, wait a minute, wait a minute, they were defending the ship against people who were attacking it. You've got it backwards. There are civilians, men and woman, on a Turkish-flagged vessel, in international waters. And here comes a group of heavily armed -- forget the paintball story -- heavily armed guys who are going to take over the ship by force and then take it to Israel, where the passengers don't want to go. And so they pick up deck chairs and other things to fight off these heavily armed -- and by the way, masked -- commandos, and somehow they become the attackers. So, that depresses me a little bit.

Leaving aside the horrible bloodshed and all, it becomes a war of words. Americans are reading what comes out of Tel Aviv, which is carried in the American press ... So, all of a sudden, the people on the Turkish ship are described as terrorist, Israel-hating, Hamas supporters, murderers and killers. I say to myself, What would you expect the Israelis to call these people? Tree-hugging environmentalists? No, they're all killers! Every single one of them. It's called smearing the opposition. And the press seems to take that. And I find that distressing. It's the use of the language that concerns me. Who's defending and who's attacking?

What questions do you think the media should be asking right now?

They should be focused on the fact that Israel illegally occupies Gaza, as recognized by the rest of the world. Therefore, Israel says you can't come into this territory because we're defending ourselves. Well, not really. Taking a ship on the high seas, if it happens off the coast of Somalia, is called piracy. If Israel claims that it's defending itself by keeping ships out, they can do it. Nobody seems to be able to stop them, or even criticize them for it if they're Americans. But that's illegal.

I offer you a further illustration of this issue. When I was taken off [the] ship in Ashdod, an Israeli official told me I was going to be deported. And I said, OK. He said, You broke an Israeli law. I said, Excuse me, I just got here, what Israeli law have I broken? And he said you came into Israel illegally. I said, OK, the ship was captured by force and I'm brought here by force, under duress, and forced into your country against my will and you call that illegal entry? We're not speaking the same language. But, of course, that's why they deported me, because I entered illegally and didn't want to.

Americans need to understand that no one in his or her right mind wants anything bad to happen to one Israeli, to one Palestinian, and in my case, above all, one American. But, bad things have happened, are happening, and are going to happen.

Thomas Friedman and Jeffrey Goldberg are both suggesting that the flotilla was not a humanitarian mission, but a political setup. How would you respond?

I would have to ask you, How the hell would they know? Sitting behind their desks, wherever it was. And the second question I would ask is, Are they known as critics of Israel? And the anwer to that question is no, they are not. I don't fault them for this. But they are known as card-carrying supporters of Israel. OK, you're allowed to do that. But don't expect me to take what you have to say as necessarily the unquestionable truth. Both of these are intelligent journalists and honorable men and all that, but their views are different than mine. So if you asked me what I think about what they wrote, I would have to respond with a Bronx cheer -- when you stick your tongue out and make a rousing noise.

I tend to discount what comes from hard-line anti-Israelis and strong-held pro-Israels, because you get their opinions, which aren't necessarily related to the facts.

Why do you think this incident, as opposed to Gaza in 2009, has attracted so much interest here?

It's partly because there were people involved from 30 countries. This is the sort of thing that organizers worked hard to get done -- despite what Mr. Friedman and Mr. Goldberg said -- to get activists, people who are aware of what is, and isn't, going on in Gaza. You can accuse that of being politically motivated. That's true to a degree. The idea was a humanitarian program.