Fromage fort: The cheese that tried to kill me 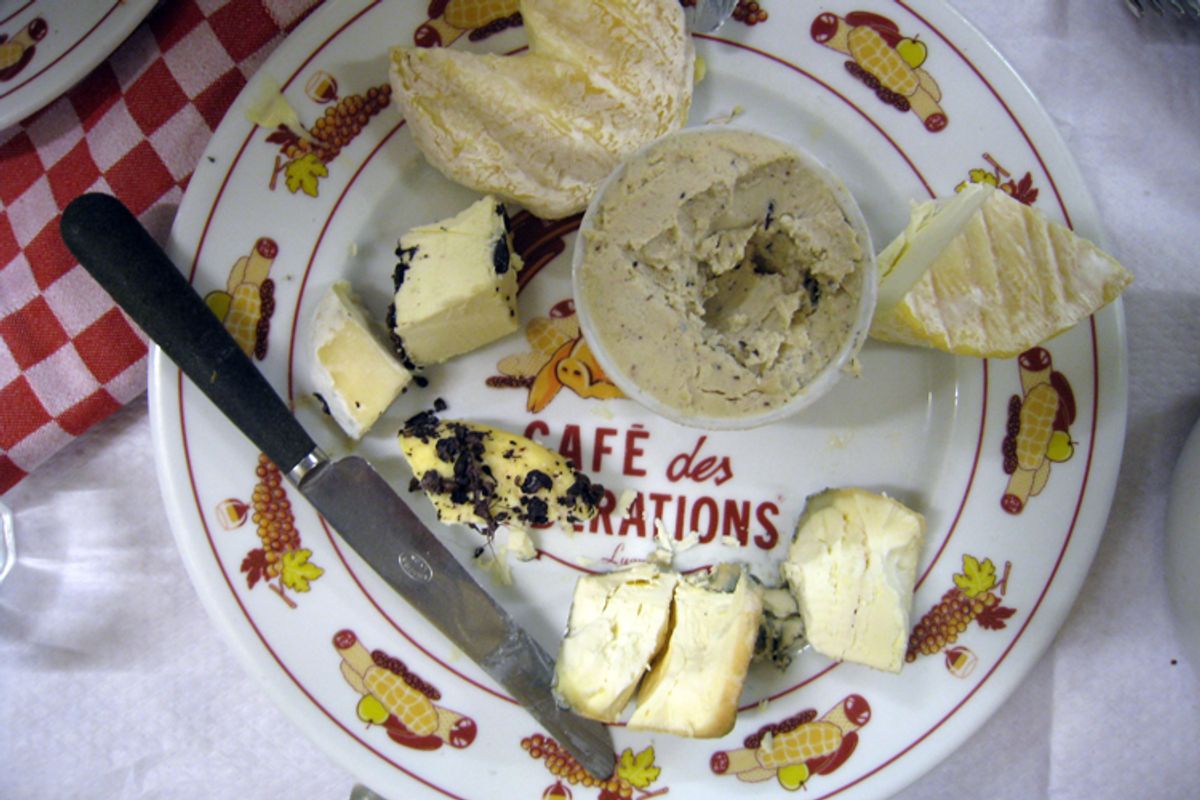 Here is a fundamental truth about cheese: It is rotting. The original point of cheese was to find a way to keep milk from going bad, and so what some strong-stomached people found was that it was better to go ahead and let it rot, but control the process. They cultured the milk with harmless bacteria and let them stave off any deadly microbes in a microscopic turf war. The trade-off, of course, is that the friendly bacteria get to feed on the milk, too, only in doing so, they break it down and remake it into a complexly delicious food for us. Win!

But the French cheese I just had tonight, fromage fort, tried -- I swear -- to kill me. And not that boring old, "I'll just sit here and let you eat me so I can poison you" kind of killing. I mean it got up off its plate and waved a knife in my face.

I have to say first that, of course, it's just stupidly easy to get your hands on socks-knocking-off-good cheese in France. On my very first day here, my friend Julia and I went down the street and randomly came home with a wedge of Brie from Melun so good, so soft and so sticky and so rich and woodsy and creamy that I caught her talking to it the next day. "Hey, Brie," she purred after getting home from work. "I've been thinking about you, baby. You been thinking about me?" (No, really. That happened.)

But tonight's board, served at the Café des Federations, was a round of speed dating with a brace of scary ladies. I guess the bleu that tasted like a cross between a spicy banana and a goat's hoof should have been a warning sign. And next to it was a cheese rolled in grape stems, seeds and skins left over from pressing wine: covered in stuff someone couldn't bear to throw away. But between the two was fromage fort, a cheese made from stuff someone really, really couldn't bear to throw away.

Fromage fort translates as "strong cheese," and is a bit of a Frankenstein -- a potted mash of old bits and pieces, the Parliament-funky rinds of leftover cheeses, and left to molder together for a bit. There's usually some kind of booze in there for extra kick (and extra protection from bacteria). Whether it's a food or a dare is largely up to interpretation. You can only imagine what earns the title of "strong cheese" in the homeland of stinky cheese.

My friends, real cheese lovers, warned me against it. But I'm a soldier! I pressed on, digging up a pale grayish chunk with my knife. I gave it a cautious nibble.

"It's not bad," I said with casual bravery. "It's kind of fruity. Kinda sweet." I thought about having a second bite.

But then my face turned grim. I know this, because my friends suddenly asked, "What's happening? Are you OK?" My mouth suddenly became a battlefield. The cheese went from fruity and sweet to sour and bitter. It started to tickle my nose, and with my second bite still readied in my hand, it started throwing off that high-toned stomach-acid flavor I believe they call bile. And then it got hot -- spicy, peppery hot, and it started to actually numb my tongue. Which would have been merciful, only it didn't also then numb my nose, my memory, or my brain.

I needed this to end. I grabbed my cup of fizzy water and washed it down ... only one of the wonderful things about fizzy water is that sometimes the bubbles can reinvigorate a flavor already passed. And, in this case, it brought the flavor of fromage fort right back, and my stomach started to churn. I marshaled my strength to breathe deeply and settle my belly, fearing the existential crisis I would go through if something that tastes like getting sick actually made me get sick. That would be too meta. My head would explode.

I eventually powered through, and when I regained my senses, I looked to find that second bite of fromage fort still in my hand. I actually thought about eating it, in that "This smells awful: Take a whiff!" kind of way. I almost couldn't believe how extreme it was. I thought better of it, wanting instead to remember my life with pleasure.

But I gave a good look at that cheese, recalling what it truly is, a controlled rot, a partnership between milk and man and microbes. Most of the time, it really works out for the best for everyone involved. But the inmates really took over the asylum on this one. This cheese had the flavor of a prison riot. And aren't we lucky that we don't actually need food so badly that we have to keep it around like this?