The tyranny of partisan groupthink

In Washington, the nuttiest ideas are often considered "mainstream" 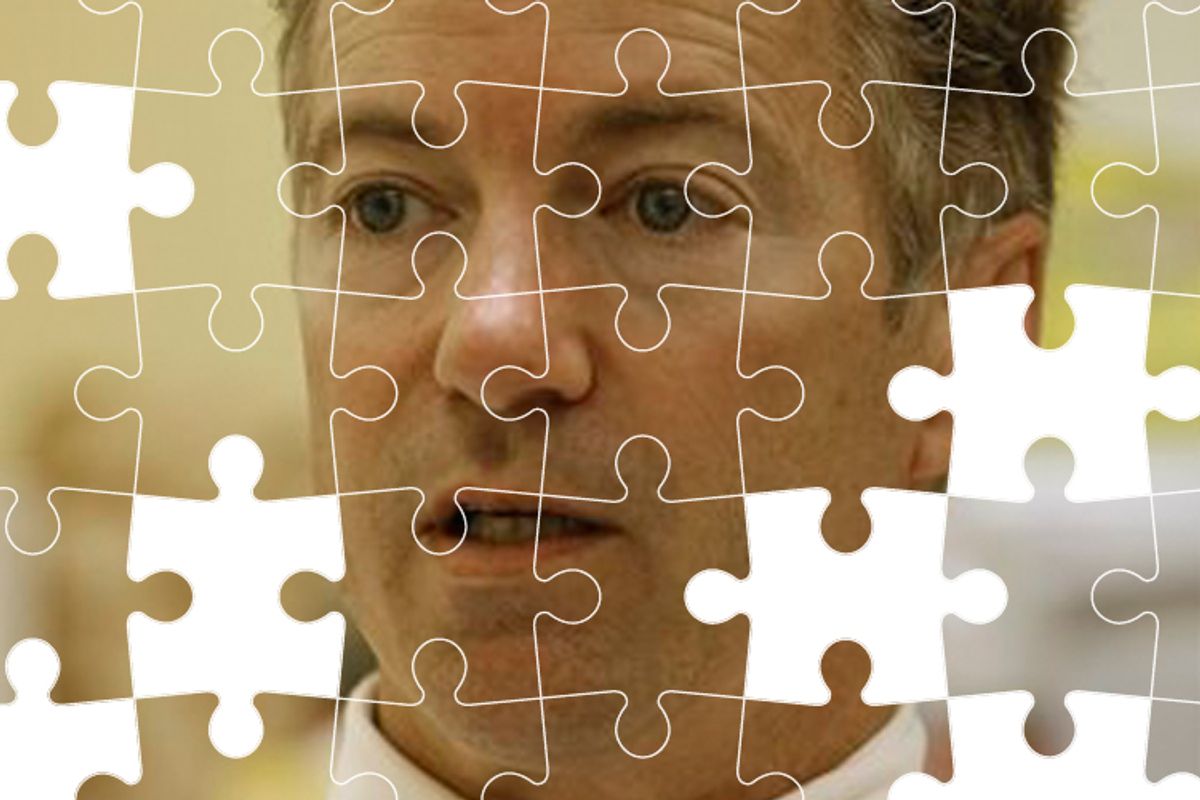 Sigh. Sophomoric is more like it. As the 47-year-old ophthalmologist was still in diapers back in 1964, he has no firsthand memory of the beatings, nightstick and dog attacks, murders and assassinations that accompanied the last days of Jim Crow. But anybody styling himself a "libertarian" ought to understand what "legal segregation" consisted of: systematic, state-sponsored denial of black citizens' constitutional rights.

Turning away black customers wasn't personal preference; across most of the South, serving them was against the law. Actually, I suspect that Dr. Paul does know that, and that his seeming naiveté masks a coded appeal to voters -- thankfully, a diminishing number -- who prate about "states' rights" as a means of expressing racial resentment.

Hardly anybody really wants to bring Jim Crow back; it's merely part of the never-ending pity party some white Southerners (and former governors of Alaska) seem determined to indulge. A revealing example of this syndrome recently appeared in my Arkansas Democrat-Gazette colleague Meredith Oakley's column.

"Dedicated left-wingers of the Supreme Court are remaking the Constitution and our lives," one man wrote. "The Court is now the combined creature of New Dealism and Modern Republicanism, bent on changing our constitutional government into a centralized, all powerful, socialist, labor welfare state."

Sound familiar? How about this? "When (President Eisenhower) came on TV last Monday night, it caused more people to have murder in their hearts by just looking at him than any other man that has ever lived."

Exchange Eisenhower for Obama, and both could have appeared yesterday.

These days, however, it's also a mistake to take such venting too seriously. As recently as 1990, for example, Arkansas Republicans were shocked to learn that unknown to most, a former Exalted Krackpot of the Ku Klux Klan had stumbled into a primary election runoff for lieutenant governor. His opponent was an African-American former Razorback football player.

GOP voters gave the ex-jock 86 percent of the vote. Something similar, I'm confident, would happen in Kentucky.

Dr. Paul's real mistake was indulging in a dorm room bull session on national television. A rookie mistake. But crazy? Nah. Even so, it's worthwhile engaging his half-baked arguments, because many people don't know the history. Calling people insane (or racist) rarely makes them more reasonable.

I also agree with Salon's indefatigable Glenn Greenwald about the tyranny of partisan groupthink in American political debate. Among the self-selecting cohort of pundits and political professionals who dictate the terms of the national conversation, Greenwald argues, there's a truly "destructive dynamic: whereby people who embrace clearly crazy ideas and crazy politicians anoint themselves the Arbiters of Sanity simply because they're good mainstream Democrats and Republicans and because the objects of their scorn are not."

In Washington, sanity is normally defined as what's convenient for politicians. In practice, that means that fallacious assumptions rarely get challenged, destructive policies never change and public cynicism increases steadily.

Writing in Newsweek, Conor Freidersdorf cites two examples: "Forced to name the 'craziest' policy favored by American politicians, I'd say the multibillion-dollar war on drugs, which no one thinks is winnable. Asked about the most 'extreme,' I'd cite the invasion of Iraq, a war of choice that has cost many billions of dollars and countless innocent lives."

Yet the same pundits and politicians (Republicans and Democrats) who dragged the United States into Iraq are still patting each other on the back, and treating those of us who resisted the great crusade as unsound even while (tacitly) admitting that we were right.

Moreover, because President Obama finds himself tied down in Afghanistan and Pakistan like Gulliver in Lilliput, Democrats must now assent to the mad premises of the "War on Terror" lest he be politically inconvenienced. If there's a surer way to stoke murderous hatred of the United States than unmanned drone attacks on peasant villages, I can't think what it might be.

Obama's arrogation of the power to assassinate American citizens living abroad whom he deems "enemy combatants" is similarly ill-advised. Trust him or not, he won't always be president.

But, hey, a Democrat's in the White House, so mum's the word.