A lawsuit pits a misguided war-movie producer against shrill, free-culture extremists -- and everybody loses 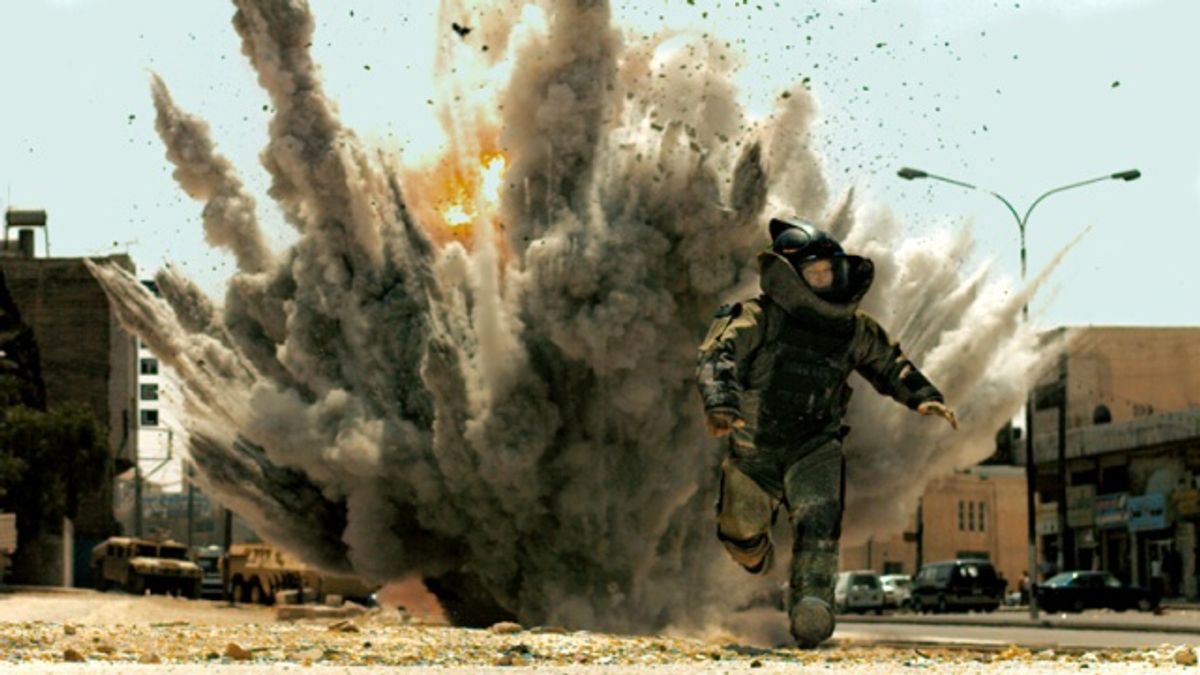 Jeremy Renner in "The Hurt Locker"
--

On Monday, "Hurt Locker" producer Nicolas Chartier made good on his promise to file suit against Internet users who downloaded the movie via BitTorrent. The suit, filed in a D.C. federal court, targets 5,000 unnamed users via their IP addresses, which lawyers for Chartier's Voltage Pictures will attempt to match up with flesh-and-blood individuals -- and, of course, their bank accounts.

The practical merits of the lawsuit aside, Chartier's actions, and particularly his angry rhetoric, have become a flashpoint for arguments over the legal and ethical implications of sharing content over the Internet. The tech blog BoingBoing reproduced an exchange between Chartier and a Canadian user calling himself Nicholas. In response to Nicholas' e-mail, which protested the "inhuman" use of litigation to defend Voltage's copyright, and promised to boycott all Voltage-related products until the suit was withdrawn, Chartier shot back an angry response. (It was not Chartier's first intemperate e-mail; he was barred from this year's Oscar ceremony for denigrating other best picture nominees.) Apart from calling Nicholas a "moron," and adding "I hope your family and your kids end up in jail," Chartier characterized downloading as a cross between physical theft and home invasion: "[P]lease feel free to leave your house open every time you go out and please tell your family to do so, please invite people in the streets to come in and take things from you, not to make money out of it by reselling it but just to use it for themselves and help themselves."

The movie and music industries have been making similar arguments for years, in court and out. In 2004, Hollywood studios attached an advertisement produced by the Motion Picture Association of America to DVDs, proclaiming, "You wouldn't steal a car. You wouldn't steal a handbag ... Piracy: It's a crime." With its abrasive music track and rapid-fire editing, the ad was targeted toward young audiences (albeit in a "kids like this, right?" kind of way), but the continued growth of illegal downloading suggests that the MPAA and its record-industry counterpart, the RIAA, have failed to convince the public that downloading is akin to shoplifting, let alone running a bootlegging business out of the back of a truck. The industry has been victorious in court, winning a string of lawsuits and financial judgments against users of peer-to-peer file-sharing services, but the victory has come at the cost of making the record labels and movie studios seem like shakedown artists, bullying students and unsuspecting housewives into coughing up exorbitant settlements lest they face five-figure judgments from unsympathetic juries. The U.S. Copyright Group, an anti-piracy law practice with the grandiose URL SaveCinema.org, welcomes potential plaintiffs with the message, "Congratulations! By reviewing our site you have decided to take the first step down an efficient, no-hassle and no-cost path to recovering losses due to illegal downloading and stopping film piracy."

The online response to Chartier's remarks was swift and overwhelmingly negative. An anonymous BoingBoing commenter railed, "I don't pay for media anymore, and won't, until the thieving scumbag middlemen like Chartier are begging for nickels on the corner or turning tricks like 'honest' whores." On IFC.com, where Matt Singer wrote a blog post sympathetic to Chartier's concerns (if not his people skills), commenters lashed out at corporate greed and "suits," comparing downloading to a starving man stealing a loaf of bread, conjuring images of a BitTorrenting Jean Valjean. A commenter named Marcus offered a standard rationale: "It's far from clear that anyone downloading 'The Hurt Locker' would have paid for it. Those who did and liked it were mainly early adopters and influencers, people who told their friends and family to check it out." The fact that Marcus could have no way of knowing who downloaded the film or what actions they took after watching doesn't enter into the discussion: Such assumptions are an article of faith.

What's striking about some of the responses to Chartier is the underlying sense of entitlement. Commenters pleaded poverty as their reason for downloading the film, implausibly implying that they can afford high-speed Internet but not a $4 Blockbuster rental, and overlooking the fact that the ability to view "The Hurt Locker," or to see any movie or hear any album, is a luxury and not a right. No doubt many of those who downloaded the film really, really wanted to see it, but merely lacking the patience to wait for a local opening or a DVD release (or simply the wherewithal to leave the house) hardly entitles them to a free pass to take anything they can get their hands on.

"I feel like there's a definite lack of respect for artists that runs through this whole conversation," says NPR/Daily Beast contributor Maura Johnston, who during her tenure at the music blog Idolator frequently duked it out with free-culture extremists and fans of BitTorrent sites like the Pirate Bay and OiNK (the founders of the first were convicted in a Swedish court, the latter was shut down after a raid by British police). "The bad guys are 'the labels,' which puts a Big Brother face on a collection of entities that includes good guys like Matador and TeenBeat." Much of the utopian rhetoric, she says, is merely post hoc rationalization. "Ask any of them to talk to someone who works at a non-major label, or loses money by touring with an indie band that doesn't have the elite status of Grizzly Bear, and they'll just turn into a Jell-O mold of catchphrases lifted from whatever BoingBoing's latest slogan about 'free culture' might be."

As Chartier demonstrates, the rhetoric is no less extreme on the other side of the fence, and at least some of the vehemence of downloading proponents is couched in response to the industry's strong-arm tactics. In an amicus brief contesting the U.S. Copyright Group's attempt to lump together thousands of unrelated defendants in the "Hurt Locker" suit and several similar actions, the Electronic Frontier Foundation accused USCG of abusing the discovery process and "jeopardizing [the defendants'] rights to an individual evaluation of their actions and defenses." According to the EFF, the suit's shotgun approach is designed to intimidate defendants into settling out of court rather than risk trial in a jurisdiction that might be thousands of miles away.

What seems to be missing from the "Hurt Locker" discussion is a middle ground where creators and consumers can meet. "I think the industry has made a real push to get file-sharing seen as theft, while the people who are users think about file-sharing as sharing," says Jennifer Granik, EFF's director of civil liberties. "Neither of those rhetorical points are representative of what the law is." All the back-and-forth obscures the real issue, which she puts in simple terms: "Artists should get paid, fans shouldn't be sued and content should be easier to access."