The blockade is an act of war, but Israelis are always reminding us how they withdrew from Gaza 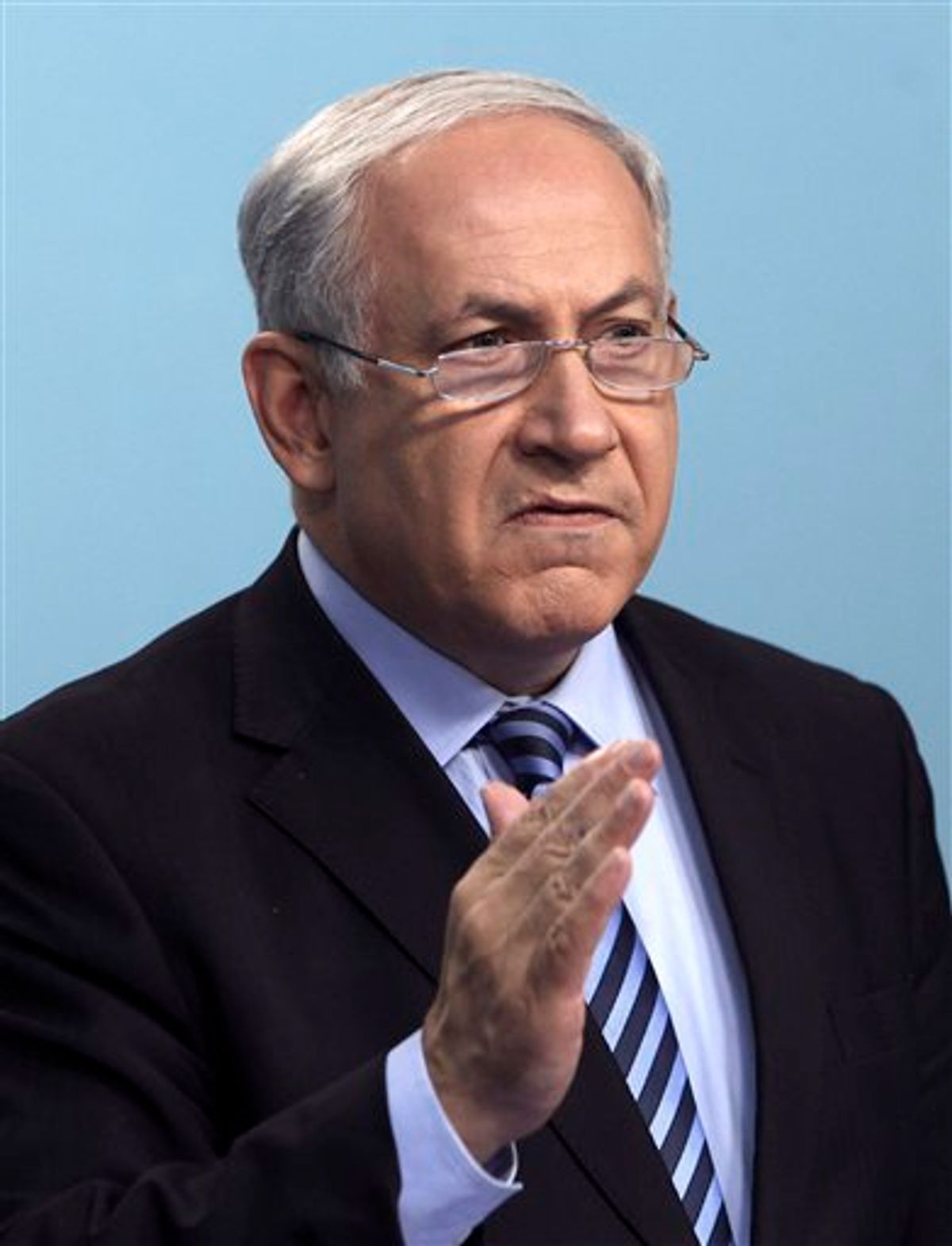 Israeli Prime Minister Benjamin Netanyahu delivers a statement concerning the Israeli naval commando raid on a flotilla attempting to break the blockade on Gaza, at his Jerusalem office, Wednesday, June 2, 2010. In an attempt to limit the diplomatic damage from its deadly raid on a Gaza-bound aid flotilla, Israel dropped plans Wednesday to prosecute dozens of pro-Palestinian activists, opting instead to deport them all immediately. (AP Photo/Jim Hollander, Pool) (AP)
--

Defending the Israeli military's actions on the Mavi Marmara means rebuilding the argument from the bottom up, to show how the IDF was acting in self-defense in each stage of a process that eventually brought Israeli soldiers onto the ship, shooting. They had to shoot, the argument goes, because they were attacked. They were attacked because they had to board, and they had to board to enforce the blockade. The blockade, in turn, is necessary to keep weapons out of Hamas-led Gaza, which might become a threat to Israelis if armed.

It's hard to dispute the bottom stages of the process. Once Israeli soldiers were attacked, they were going to respond. And though they botched the response badly, this is clearly still the strong point of the Israeli case -- video of passengers, some armed, attacking the boarding force.

But there's sleight-of-hand going on here. Linking the commandos under attack on the Mavi Marmara to Israel as a whole is a false parallel. The Israeli government wants you to think that that ship is the Middle East, the Arabs are the angry mob, and the Jewish state is those soldiers under attack. But Israel isn't just an actor in this movie. It's also the director.

Defenders of the boarding action have been saying that the blockades are perfectly reasonable, standard acts of self-defense. At the Daily Beast, Les Gelb writes, "The United States and Britain were at war with Germany and Japan and blockaded them. I can't remember international lawyers saying those blockades were illegal -- even though they took place on the high seas in international waters."

A pair of Op-Eds today in the New York Times make similar arguments. Daniel Gordis admits that Israel stumbled into a trap. "But that does not make the blockade wrong. Hamas is a terrorist organization that completed its takeover of Gaza through brute force. It executes its political enemies at will. It is one of the world's most misogynist regimes, allowing the murder of women for the slightest infraction of family honor."

But, of course, Israel is not at war with Gaza. And in other circumstances, it is the Israeli right wing that is always first to point this out. The argument, constantly repeated by conservatives since Ariel Sharon’s government unilaterally withdrew from the Strip, is that Israel ended the military occupation, and the reward it got was Hamas intransigence.

In the blockade, then, Israeli leaders and their allies are trying to have it both ways. They want to be able to say that they left the Palestinians in Gaza to their own devices. That's how you get these hot-air arguments like Gordis' in the Times, quoted above. Gordis wants to explain away everything that's happened as the fault of Hamas' nastiness. Israel withdrew, remember?

Of course, from the Palestinian point of view, this looks nothing like reality. There are more Israeli settlers in Palestinian territory as a whole now than there were before 2005. The Israeli withdrawal didn't trade land for peace, according to the old negotiating formula. It didn't trade anything at all -- it just up and acted. So it may have felt like a concession to Israeli radicals in the settler movement, but it sure didn't feel like much of a win for Palestinians.

Israel only had 8,000 or so settlers in Gaza before the withdrawal, with 12,000 soldiers and police officers protecting them. Since the evacuation, however, thousands more settlers have moved into the West Bank -- exactly the maneuver that the Gaza withdrawal was meant to create room for.

Meanwhile, however, Israel is also keeping Gaza as something roughly like an open-air prison. This lets the Netanyahu government shrug and say, in effect, "It's not our fault that they elected Hamas. Now we just have to keep them from getting weapons." This is the posture of a government that’s not willing to let the Palestinians have any control over the situation, but refuses to admit as much. It's a bit rich, then, to act shocked when Palestinians go and vote for Hamas. They may be a terrorist gang, but what ground is more fertile for an organization like Hamas than a prison?

And this gets us back to the blockade. Israel has been the prime mover all along, the architect of virtually every development in this process. And the design has called for a facade of concession, veiling a continuing monopoly on power. If the Israelis want to act like they're at peace, it's convenient: They can say they withdrew, so whatever's gone wrong must be Hamas' fault. And if Israel wants to act like it's at war, and reinvade Gaza or impose a blockade, it can do this, too. It's a quantum political state: They're at war and at peace simultaneously. And that instability makes it awfully hard for the outside world to get enough of a fix to lodge a criticism.