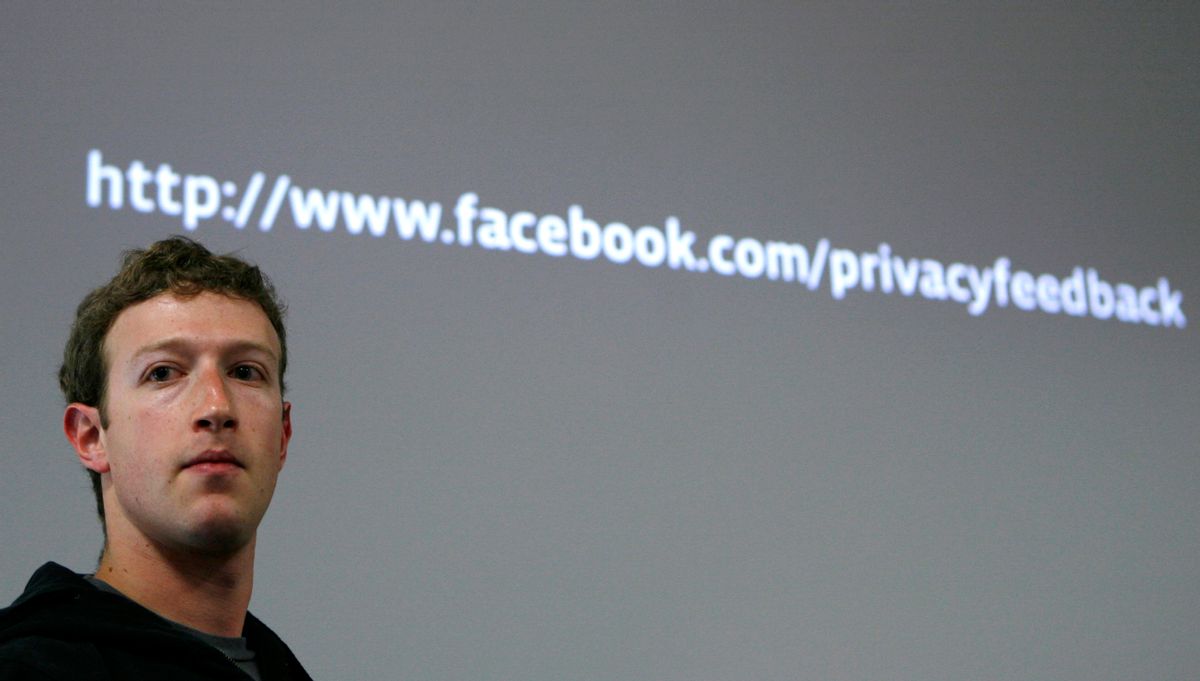 Some of the tech-world buzz today is about Facebook founder and CEO Mark Zuckerberg's astonishingly poor showing onstage at this week's Wall Street Journal conference, All Things Digital. Make no mistake: His fumbling, rapid-fire, sweat-drenched appearance was probably the most cringe-inducing at the D gathering since Jerry Yang and Sue Decker, then CEO and president of Yahoo, spent many minutes several years ago failing to explain what business Yahoo was in.

On Wednesday afternoon, Zuckerberg repeatedly ducked some fairly simple questions about Facebook and its notoriously evolving privacy policies -- rules and default settings that have led many, including me, to mistrust the company and its intentions. In fact, his fast-talk evasions deepened my sense of unease.

What attracted much of the notice, especially from media covering the event, was his extreme perspiration, which more than a few commentators called Nixonian. (This is a reference to a TV debate Richard Nixon held with John F. Kennedy in 1960 when they were running for president; Nixon's sweaty, shifty appearance in the first-ever event of its kind is widely seen as one of the reasons he lost the election.)

The Nixon comparison is, of course, a big stretch -- and it distracts from the much more serious issues.

The "he's young, give him a break" folks have half of that right. He's young, just 26 years old, and has the obvious smarts (and a solid senior team) to get his P.R. efforts in better shape. But give a break to someone who wields such influence? Not likely.

I don't know Zuckerberg personally. Several people I know well, and who know him well, say he's deeply thoughtful about what he and his talented team at Facebook are creating. And his admission of having said and done regrettable things when he was a much younger college student -- Facebook was founded at Harvard, where he was an undergraduate -- was at least a sign of some self-awareness.

But I absolutely do not trust him or his company's intentions. Facebook's P.R., and Zuckerberg's recent statements on privacy, claim a deep concern for users' privacy. Their actions tell a different story. Repeatedly, Facebook has expanded the user data and postings it makes public by default, as this compelling visualization by IBM's Matt McKeon﻿ shows. The evidence suggests that the company's policy is to push and push the boundaries, roll back when enough people complain, and then keep pushing.

This is worrisome enough. But consider, among many other Facebook aims, its goal to essentially own personal identity on the Web -- identity that you use to sign into all kinds of other sites. If Facebook becomes the default user ID for the Internet, it will have a power that no single company should own, period.

Facebook's legions of fans, and most of its users, plainly find this line of thought silly. They keep signing up and using the service for more and more of their activities. They may regret their info-promiscuity someday, but maybe Zuckerberg is right that people really don't care, and maybe there will be no consequences for not caring. Although we all need to cut each other some slack about the foolish things we all say and do, especially when we're young, I'm also convinced we need zones of genuine privacy, and that we should not turn over our Web presences to a single company, even one we might trust. (I'll be writing more about this in an upcoming post.)

For now, when I watch Facebook, I hear echoes of Silicon Valley in the late 1990s, when the standard of behavior changed. What was acceptable was what you could get away with. That's a corrosive way to do things.

A longtime participant in the tech and media worlds, Dan Gillmor is director of the Knight Center for Digital Media Entrepreneurship at Arizona State University's Walter Cronkite School of Journalism & Mass Communication. More about Dan here.