From amphibian tales to sinister sci-fi, your guide to keeping your boys reading throughout the holiday months 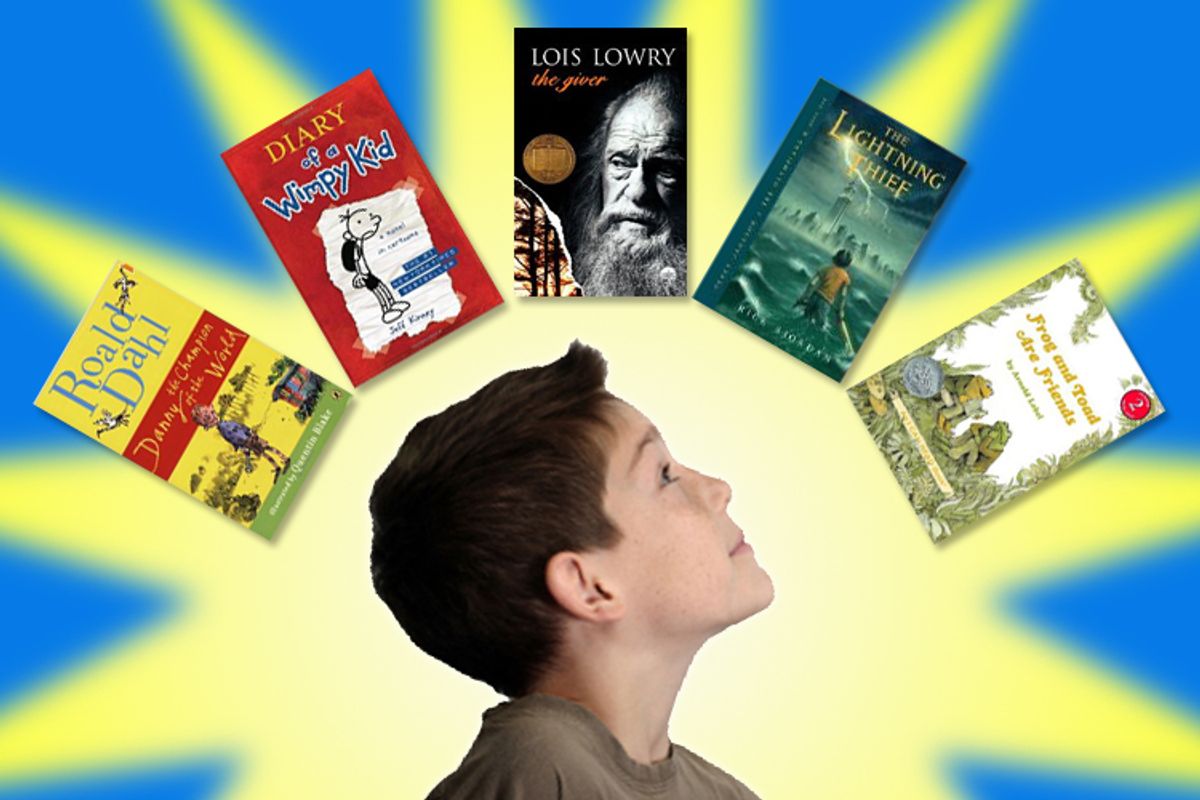 Last week, we hoped to spark conversation -- and further suggestions -- with a list of five amazing books to hand daughters this summer. We’re not leaving the boys behind. Here is our list of five great books for boys of all ages (books that will also, of course, appeal to girls, too). If your (or your kid’s) favorite book has been left off this list -- John D. Fitzgerald’s "The Great Brain"? Norton Juster’s "The Phantom Tollbooth"? The Lemony Snicket books? Or, for the sports-minded child, Dan Gutman’s Baseball Card Adventure Series, or Kadir Nelson’s remarkable "We Are the Ship"? -- blog about it on Open Salon: Just make sure to tag your post "Building a bookworm," and we'll cross-post the best ones onto Salon itself.

"Frog and Toad Are Friends" by Arnold Lobel (Ages 4-8)

The thing about Lobel’s Frog and Toad -- see also the equally wonderful "Days With Frog and Toad," "Frog and Toad All Year" and "Frog and Toad Together" -- is that, despite the whole amphibian thing, they’re so damn human. Toad is crabby, self-doubting and, let’s face it, somewhat prone to depression. Frog has a sunny, can-do disposition. And they may be an odd couple, of the Oscar and Felix variety, but they are also kind, supportive, considerate, loving friends. And though these stories are, of course, beloved by children of both sexes, the way these two very different fellows take care of each other -- and delight in each other’s company -- seems like a particularly valuable example for young boys.

Kinney’s "Wimpy Kid" series may not be writing at its finest, but it has struck a major chord with boys, capturing the attention of even the most reluctant readers. Described as "a novel in cartoons" -- with lots of drawn illustrations, a lined-paper format and a font that looks like handwriting -- it has an undeniable charm, evoking the misery that is middle school in spare, deft strokes. Its beleaguered narrator, Greg Heffley, isn’t the most sympathetic character, selling out his best friend Rowley when the occasion suits him, but he has a keen eye for demoralizing details. Like the cheese that lies rotting and repulsive on his school blacktop, spawning the terrors of "Cheese Touch." "It’s basically like the Cooties," Greg explains. "If you get the Cheese Touch, you’re stuck with it until you pass it on to someone else. The only way to protect yourself from the Cheese Touch is to cross your fingers." If that doesn’t take you right back to middle school, well, you’re luckier than some of us.

If there is a more moving depiction of the relationship between a son and his father in all of literature than the one in this rollicking adventure tale, we’d sure like to know about it. "It is impossible to tell you how much I loved my father," Dahl’s narrator, Danny, tells us. "When he was sitting close to me on my bunk I would reach out and slide my hand into his, and then he would fold his long fingers around my fist, holding it tight." But Danny’s love for his dad -- a filling station owner and widower who is raising his only child in a gypsy caravan -- is apparent in every line, every moment of this story. Danny’s dad, he tells us, is an "eye-smiler," whose eyes flash and twinkle when he is amused, but who never much moves his mouth. "I was glad my father was an eye-smiler," Danny writes, "because it is impossible to make your eyes twinkle if you aren’t feeling twinkly yourself." This gentle, funny, genuinely wonderful book will leave boys (and their parents) eye-smiling and deliciously amused.

Start your son on this first book in Riordan’s Percy Jackson and the Olympians series and watch him read away his summer. When we first meet Percy, he just seems like a troubled kid on the verge of getting kicked out of yet another school. In fact, he’s gone through six schools in six years: Bad things just seem to keep happening to him. It isn’t long before Percy (short for Perseus), and we, learn that those strange things he thinks he’s been hallucinating are actually real. Mythological monsters and gods -- satyrs, minotaurs, centaurs -- really are populating his life and he himself is a half-blood: His father, whom he never knew and had been told had been "lost at sea," is, in fact, Poseidon. This popular series is a great read for any myth-minded kid who cut his teeth on "D’Aulaires’ Book of Greek Myths." Come to think of it, it’s a great read for any kid. Come to think of it again, it’s just a great read.

This book about a futuristic world that initially seems utopian (no crime, no poverty, no illness, abundantly good manners), but, as it turns out, is less than ideal (no color, no music, no sunshine), is creepy yet altogether compelling. As it begins, 11-year-old Jonas is apprehensively anticipating his Ceremony of Twelve, when he will receive his adult Assignment from the Committee of Elders. Will he be a Nurturer or a judge, like the parents who are raising him? Will be a Caretaker of the Old, like his friend Fiona? But Jonas does not receive a conventional assignment: He is selected to become the community’s next Receiver of Memory, tasked absorbing the collective recollection of pain and pleasure, which the community has long since eschewed in pursuit of comfort, stability and Sameness. Jonas meets daily with the previous Receiver, now the Giver, and learns to appreciate a world with choice and compassion -- and love.