Doubling down in Afghanistan

Why the U.S. government stubbornly refuses to fold a losing hand 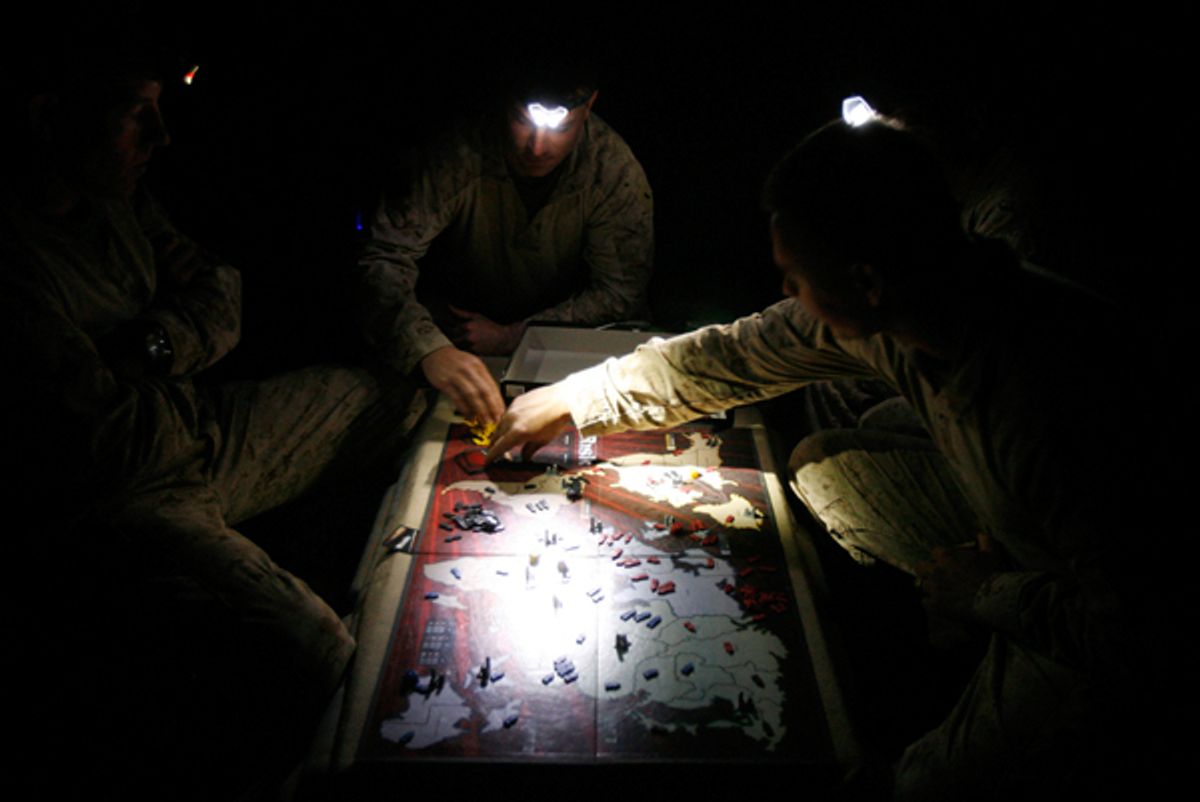 U.S. Marines from Kilo company, 3rd Battalion 6th Marines play a round of the "Risk" boardgame by the light of their flashlights in COP Reilly base in Marjah district, Helmand province, March 24, 2010. REUTERS/Asmaa Waguih (AFGHANISTAN - Tags: MILITARY POLITICS IMAGES OF THE DAY) (Â© Asmaa Waguih / Reuters)
--

As Congress moves toward rubber-stamping yet another "emergency" supplemental bill that includes more than $33 billion for military operations, mainly to fund the latest surge in Afghanistan, maybe we should take a page from the new British government. Facing debilitating deficits, the conservative Tories and their Liberal Democrat partners are proposing painful cuts to governmental budgets, including military operations in Afghanistan. As the Independent put it, quoting a senior military source, "Essentially, the Americans know we are broke and we are getting blokes killed for no good reason. Whatever the [British Ministry of Defence] says, it absolutely isn't business as usual." In other words, an overstretched government, low on chips and recognizing a losing hand in Afghanistan, is finally moving to cut its losses, perhaps even to walk away from the table.

The question is: Why can't we join them? We're losing even more chips (adding up to a staggering $299 billion for the war in Afghanistan, and counting) and "blokes" (more than 1,000 U.S. troops killed, with their average age dropping). Isn't it time to know when to walk away, as Kenny Rogers sang in The Gambler, before we have to cut and run?

Instead of recognizing a losing hand and folding, however, Washington continues to double down, whether our gambler-in-chief is named George W. Bush or Barack H. Obama. And so we're putting on our game face again, as we shove tens of billions more into the Afghan pot, along with roughly 100,000 of our troops supported by an even greater number of private military contractors, hoping that, against the odds, we'll draw to an inside straight even as our opponents hold flushes.

And, in case you're not a poker player, a flush beats a straight every time.

Of Poker and War

If my poker metaphor sounds frivolous for a deadly nine-year-old war, consider it a bow to the great Prussian war theorist, Carl von Clausewitz. He classically described war with all its uncertainties as resembling, above all, a game of cards.

To extend the metaphor in Afghanistan, we're engaged in a high-stakes poker match at our opponent's table, and his card sharks are remarkably adept at dealing from the bottom of the deck. Of course, we're alert enough to know that the game is fixed, but strangely, that only makes us more determined. We are, in fact, insistent that ultimately we'll make his table ours; in the meantime, we'll bribe or browbeat his bottom-dealers for better cards, bluff or shoot our way out of losing hands. Or so we gun-slinging Americans like to imagine.

Meanwhile, back in the U.S., land of risk-takers and winners, our Washington beltway policymakers have become inured to the risks this sort of compulsive gambling entails. They continue to throw money and men on the table, no matter the odds in the unkindest of houses (and, whatever else they've been, Iraq and Afghanistan certainly haven't been kind to American agendas).

Think about it. In the next year or two, no matter how well or how poorly we play our cards in Afghanistan, it doesn't appear that we'll seriously consider folding and walking away.

Take, for example, our latest do-or-die offensive about to be launched in Kandahar, the country's second largest city, and environs. If all goes well this summer and the U.S. military wins a few hands in the Kandahar region, Washington's addictive mentality will doubtless take this as evidence that the tide has turned, our luck has changed. In short, we'll double down.

And if our offensive goes poorly? Undoubtedly, Washington will take this as evidence that we had a chance, but didn't ante-up enough chips or simply hit a stretch of bad luck. Then, like compulsive gamblers everywhere, they'll insist on playing a few more hands, but this time just a little more smartly. In short, they'll double down.

So, if they win, it's "we're on a roll"; if they lose, it's "next hand, baby, next hand." And what about President Obama's pledge to walk away from the Afghan poker table beginning in 2011? Fuggeddaboudit.

Knowing When to Fold'em

War, as any sane person knows, is a life-or-death gamble, usually at long odds -- and let's face it, we've been gambling at the longest odds for years now. It was never a smart move to invade either Afghanistan or Iraq, and then try to plant pseudo-democracies in soil that was unlikely to sustain them. In Afghanistan, it wasn't smart to squeeze local card sharks and tough guys even as they squeezed us, whether by stealing outright or forcing us to pay protection money in a rigged game. It wasn't smart to woo hearts and minds while busting heads and bodies ("aggressive interrogation") and plugging mid-level thugs ("targeted assassinations") with missiles and slugs, all the while knocking off far too many civilian noncombatants as we went.

Under the pressure of so many losing hands, our tactics in Afghanistan have become increasingly erratic, swinging from idealistic plans for nation-building to pragmatic "clear-and-hold" counterinsurgency, from upbraiding Afghan leaders to uplifting them. Like a flustered gambler, we've lost all sense of the cards staring coldly back at us.

Now, let's return to our British partner, sweating it out at the table. Low on chips and holding bad cards, he'd like nothing more than to swallow his pride and get out of Dodge. He looks for a nod from us, some recognition that walking away with our shirts still on our backs is better than losing it all.

Yet his Washington partner stubbornly plays on, compelled to double down yet again in spite of the odds.

Tell me: Is the fight truly worth it? Is Afghanistan really the place for us to go "all-in," whatever the cost to our military, our economy, even our way of life?

Only a compulsive gambler would answer yes.

William Astore (wjastore@gmail.com) is a retired lieutenant colonel (USAF). He has taught at the USAF Academy and the Naval Postgraduate School and currently teaches History at the Pennsylvania College of Technology.

William J. Astore is a retired lieutenant colonel. He has taught cadets at the U.S. Air Force Academy, officers at the Naval Postgraduate School, and currently teaches at the Pennsylvania College of Technology. He is the author of "Hindenburg: Icon of German Militarism," among other books. He may be reached at wastore@pct.edu.