Will the cute one apologize to George W. Bush (and John Boehner) for making light fun of the former president? 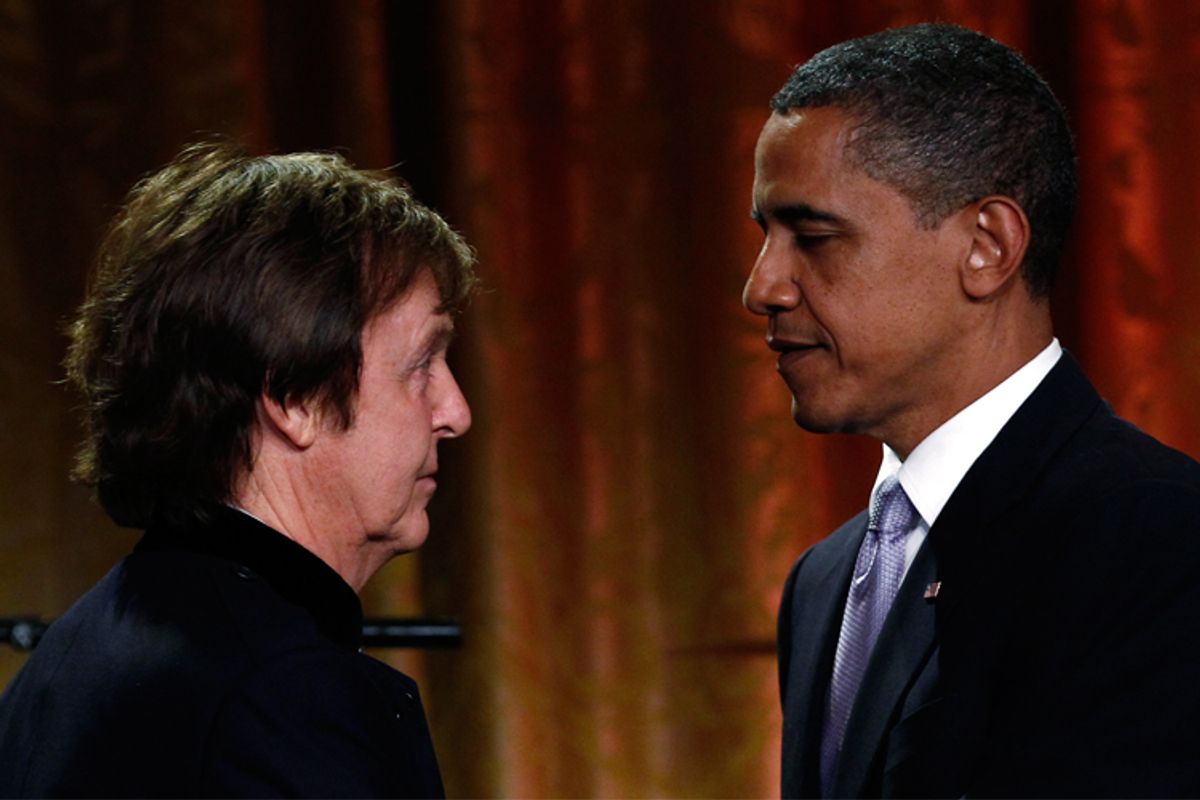 President Obama honors Paul McCartney at the White House on Wednesday, June 2. McCartney was awarded the 3rd Gershwin Prize for Popular Song from the Library of Congress.
--

Right-wingers are seriously up-in-arms about the fact that a Beatle -- a pot-smoking vegan hippie '60s musician -- made light fun of the Republican former president. Contributors to and readers of National Review's The Corner and House Minority Leader John Boehner are upset that Paul McCartney made a tacky Bush-is-dumb joke. It is the year 2010, and the Republican Party is outraged that a hippie made fun of a square.

This is what happened: Paul McCartney won an award from the Library of Congress, because even though he had probably the third-best solo career as a Beatle, Ringo is not yet properly recognized for his songwriting prowess and the other two are dead. Sir Paul played a concert for President and Mrs. Obama.

At the end of the concert, Paul McCartney made a joke. He said: "After the last eight years, it’s good to have a president that knows what a library is."

This made The Corner's Jay Nordlinger mad. He wrote a blog post headlined "Sir Jerk?" (Hey Paul, the Most Excellent Order of the Jerk Empire called....) Jay is just so mad that people say mean things about the good president, the one he liked. He is sick of name-calling and disrespect! (He does not, I take it, read The Corner regularly.)

Can anyone tell me why people are such schmucks? Why they are so graceless and clueless and nasty? I mean, Paul McCartney’s like the richest, most popular, most honored musician in the world. Does he not have it in him to behave like a gentleman — or at least a non-boor — while he’s being celebrated at the White House? Does he have to be the Wanda Sykes of popular music? Is it not possible to love Obama, as McCartney does, without hating Bush — or at least insulting him on a high, non-political occasion?

I don’t care that “Penny Lane” is a pretty tune, Paul McCartney is a horse’s butt. Let me amend that: He acted like one, on Wednesday night.

Then, Nordlinger sums up the reader response. His readers say, a) Bush is smart, b) it was terrible that those Obama jerks laughed like "hyenas," and c) some mean liberals insist that Bush is stupid.

It gets even better! Boehner issued a statement! He is equally outraged that a Beatle made fun of a politician:

Like millions of other Americans, I have always had a good impression of Paul McCartney and thought of him as a classy guy, but I was surprised and disappointed by the lack of grace and respect he displayed at the White House. I hope he'll apologize to the American people for his conduct which demeaned him, the White House and President Obama.

Why isn't Obama properly angry at Paul, the supposed cute one and alleged walrus, for his terrible crime against civility?

Whatever. It is practically universally acknowledged by objective observers, and by many right-wing admirers of the former president, that George W. Bush is, to put it charitably, intellectually incurious. Being an unintellectual regular-guy was part of his political appeal.

Hippie '60s musician Paul McCartney, whose famous band championed a number of left-wing radical causes, made a joke about how he was glad to have a liberal intellectual as president instead of a conservative anti-intellectual.

I'm not so much baffled at the the fact that right-wingers are mad about this -- getting pissed at the hippies is still a popular sport among that crowd -- but I cannot figure out why Jay Nordlinger and John Boehner are acting so surprised. "Beatle disrespects conservative politician" is pretty "dog bites man."

(But, to be fair, George W. Bush does probably know what a library is, because a lot of work went into funding his.)