The wacky flotilla satire video, brought to you by a right-wing think tank 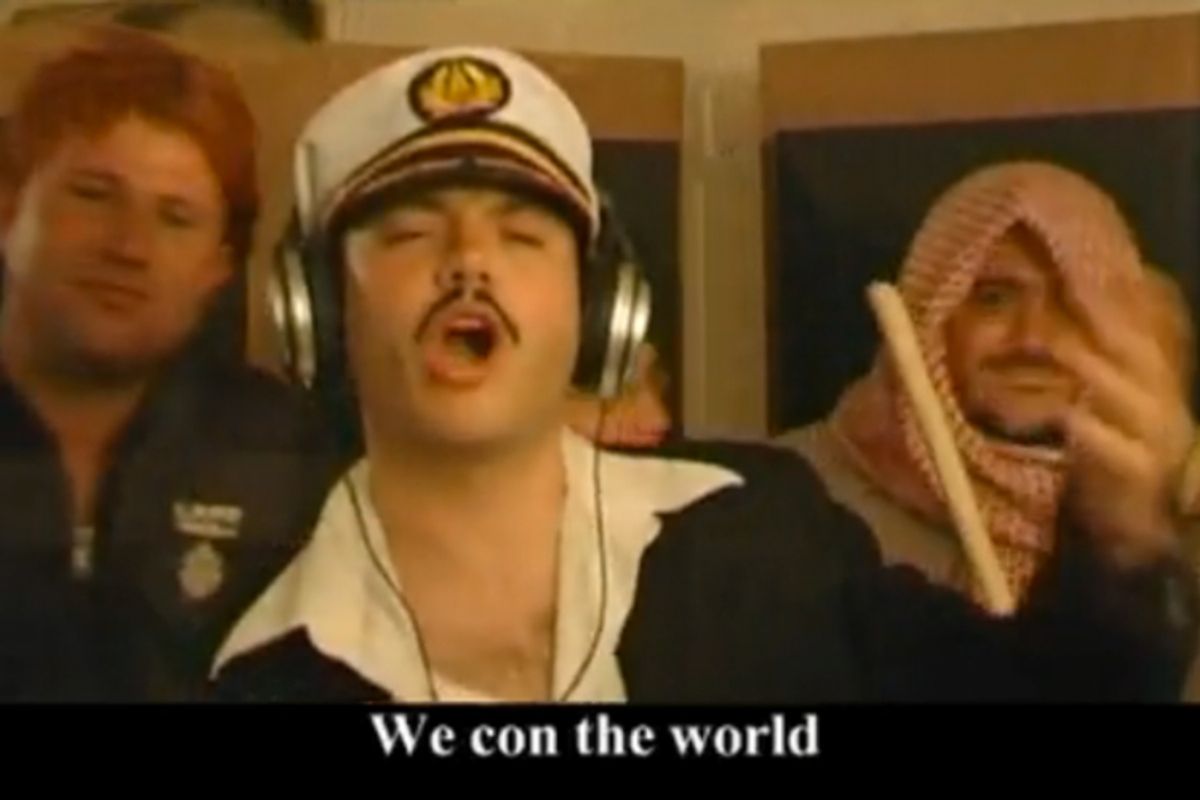 Hebrew-language "satire" website Latma produced a funny web video about the deadly raid by Israeli commandos on an aid flotilla headed for Gaza in which 9 activists, including an American citizen, were killed. The video is a laugh riot, especially if you love Israeli Jews dressing up as dead Palestinians and Muslims (and British and American activists) and singing funny songs:

In the comments, a self-described liberal Jew takes pains to note that while he supports not taking this whole thing so "ominously serious," this video might make other liberal American Jews view Israel negatively. He is promptly called a JINO.

Latma's editor, and the creative force behind the video, is Caroline Glick. Glick is the deputy-managing editor of The Jerusalem Post. But more importantly, she's the Senior Fellow for Middle East Affairs of the Center for Security Policy.

CSP is a far-right think tank founded by Reagan-era Defense Department official and "Scoop" Jackson protege Frank Gaffney. The board is made up of representatives of defense contractors who do business with Israel and the most implacably hawkish members of the neocon Republican foreign policy establishment. It's funded in large part by ultra-conservative American Zionists.

Latma, Glick tells us, is "is the initiative of the Center for Security Policy's Middle East media project...."

A 2002 Nation article explained the influence and makeup of CSP (and the Jewish Institute for National Security Affairs, its spiritual cousin). CSP's leaders were a team of hawks so intransigent that even Paul Wolfowitz and Karl Rove began to get uncomfortable with their influence during Bush's first term.

Funding for this wacky satire was brought to you by:

Gaffney's operation has always been a small one, about $1 million annually--funded largely by a series of grants from the conservative Olin, Bradley and various Scaife foundations, as well as some defense contractor money--but he's recently been able to underwrite a TV and print ad campaign holding that the Palestinians should be Enemy Number One in the War on Terror, still obsessed with the destruction of Israel. It's here that one sees the influence not of defense contractor money but of far-right Zionist dollars, including some from Irving Moskowitz, the California bingo magnate. A donor to both CSP and JINSA (as well as a JINSA director), Moskowitz not only sends millions of dollars a year to far-right Israeli settler groups like Ateret Cohanim but he has also funded the construction of settlements, having bought land for development in key Arab areas around Jerusalem. Moskowitz ponied up the money that enabled the 1996 reopening of a tunnel under the Temple Mount/Haram al-Sharif, which resulted in seventy deaths due to rioting.

Also financing Gaffney's efforts is New York investment banker Lawrence Kadish. A valued and valuable patron of both the Republican National Committee and George W. Bush, Kadish helps underwrite CSP as well as Americans for Victory Over Terrorism, an offshoot of conservative activist William Bennett's Empower America, on which he and Gaffney serve as "senior advisers" in the service of identifying "external" and "internal" post-9/11 threats to America. (The "internal" threats, as articulated by AVOT, include former President Jimmy Carter, Harper's editor Lewis Lapham and Representative Maxine Waters.) Another of Gaffney's backers is Poju Zabludowicz, heir to a formidable diversified international empire that includes arms manufacturer Soltam--which once employed Perle--and benefactor of the recently established Britain Israel Communication and Research Centre, a London-based group that appears to equate reportage or commentary uncomplimentary to Zionism with anti-Semitism.

In 2007, another CSP "media project" -- "Family Security Matters," a website designed to warn the American middle-class of the life-threatening dangers posed by radial Islamists -- famously ran an essay by a crank named Philip Atkinson that called for President Bush to name himself president-for-life, in the mold of Julius Caesar. Atkinson also called for "President Bush to use his nuclear weapons to slaughter Iraqis until they complied with his demands, or until they were all dead." CSP very quickly disappeared the essay from its website.

I know it's a very controversial opinion, but perhaps the people charged with building and maintaining steadfast support of Israel among American Jews (and gentiles!) might try not being proudly violent racist nutcases who seem to cheer the death of their enemies and occasionally support the complete elimination of Arabs?