Vote Nikki Haley for South Carolina governor! She promises to do the right thing if it later turns out she's lying 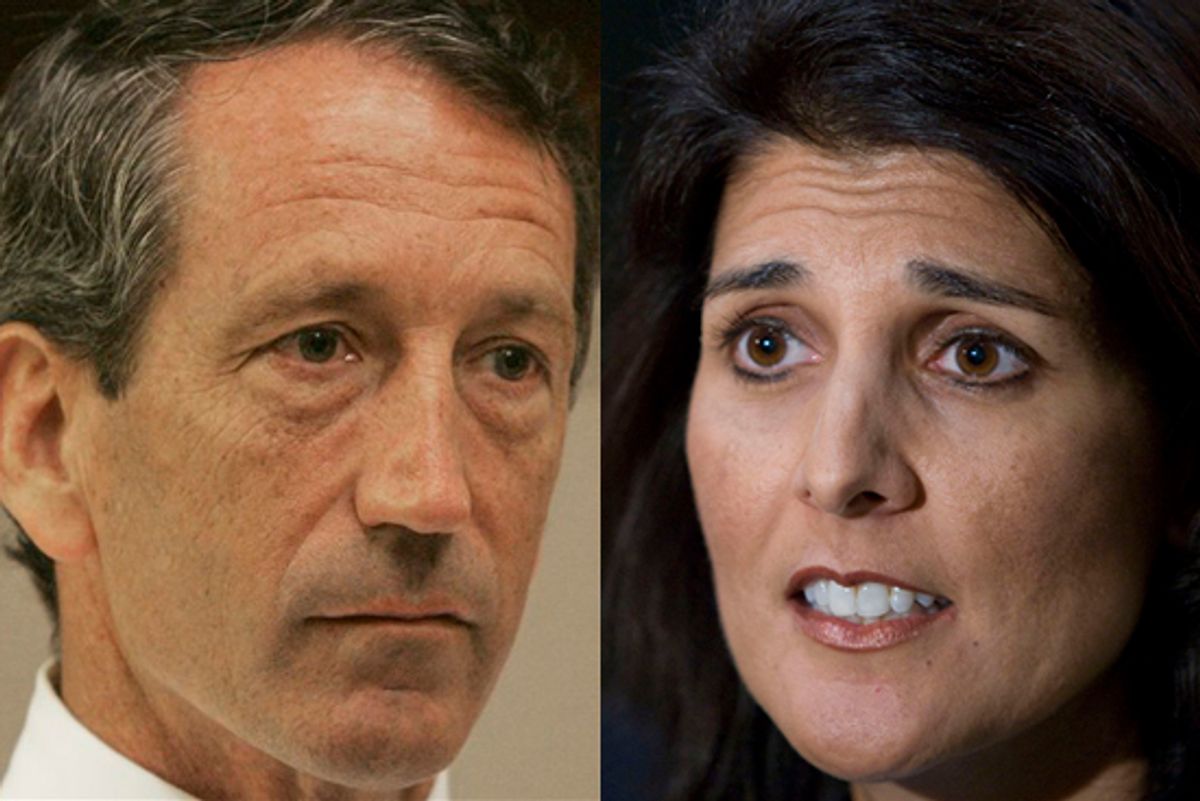 South Carolina Gov. Mark Sanford talks during an interview with The Associated Press about his relationship with an Argentine mistress, in his Columbia, S.C., Statehouse office on Tuesday, June 30, 2009. During the interview Sanford said that he "crossed lines" with a handful of women other than his mistress but never had sex with them. (AP Photo/Mary Ann Chastain) (Mary Ann Chastain)
--

If Nikki Haley is elected governor of South Carolina, and ends up pulling a Mark Sanford, she promises to then pull a reverse-Sanford and actually retire.

It's one thing to just refuse to dignify rumors of sexual misconduct with a response. It's another to deny them but then announce that you will resign the post you have not yet been elected to if, despite your denial, they turn out to be true. That is kind of weird. That's also Nikki Haley's new position:

Cohen: "If something comes out after you win the primary, or after you win the general election become South Carolina's next governor, if something were to come out that validates the claims that have been made against you -- in terms of stepping out on your husband and on your marriage -- would you resign as governor because basically the way you've handled it has been an absolute, 100 percent denial? Would you resign or would it be dragged out?
Haley: "Yes."
Cohen: "Yes you would resign?"
Haley: "Yes."

Two people have come forward to claim that they had "inappropriate" relationships with the married Haley. One of them is a prominent local blogger and sometime political activist who's released some supporting evidence. The other is a lobbyist who worked for one of Haley's opponents up until the day he came forward to claim he had a one-night stand with Haley in 2008 (he has provided no evidence).

Haley has flatly denied both men's claims. This promise lends some weight to the denial. (On the other hand -- I can't really think of a way to definitively "prove" an old affair with someone, assuming you didn't, you know, film the affair.)

Haley benefits from the fact that her enemies are particularly unsympathetic. The blogger making the claim is a misogynist creep who's clearly taking great pleasure in the attention he's receiving. The Haley opponent the other guy worked for is a dim bigot. And just the other day, a South Carolina state senator used an atrocious racial slur in reference to Haley, who was born in India and raised a Sikh.

So the worse it appears to get for her, the better off she might end up being in the polls.