Jake Knotts, "raghead" and the nature of GOP racism

By calling Nikki Haley a "raghead," a state senator gives us a chance to think about what racism is 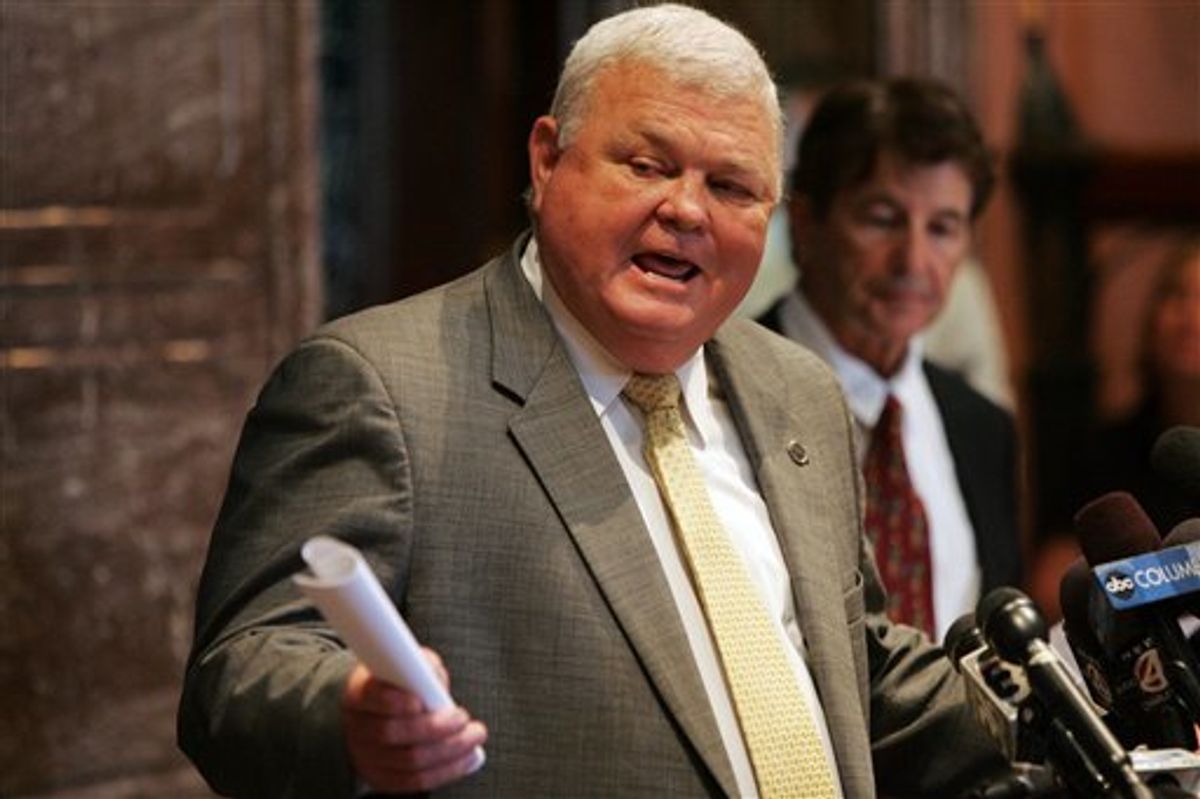 South Carolina State Sen. Jake Knotts answers a question during a news conference at the Statehouse in Columbia, S.C. on Friday, June 26, 2009. Knotts encouraged other legislators to call for Sanford's resignation and urged him to "do the right thing" and step down voluntarily. (AP Photo/The State, Gerry Melendez) (Associated Press)
--

You know the pattern. Since the 2008 campaign, every few weeks or months some minor political figure in the GOP utters something scandalously racist about the president. The Republican Party distances itself from the comments. Democrats mutter about how the conservative movement is riddled with troglodytes. Nobody gets anywhere.

Yesterday, as Alex Pareene noted, South Carolina Republican state Sen. Jake Knotts gave us an unusually frank rendition. Of his party’s front-running gubernatorial candidate, state Rep. Nikki Haley, Knotts said, "We already got one raghead in the White House. We don't need a raghead in the governor’s mansion." Haley immigrated to the United States as a child from India. She is a convert to Methodism, from Sikhism.

Sikhs are, of course, not Muslims. Hailing from what is now the border area between Pakistan and India, Sikhism bears some similarities to Islam and Hinduism both, but is not a sect of either. To lump it in with Islam makes about as much sense as an insult as calling a Christian a kike. Same geographical origin, very rough theological similarities — close enough, right?

Anyway, despite the crude literalism of the slur — like many Muslims, orthodox Sikh men wear turbans — it's fairly clear from the thrust of the insult that Knotts thought he was just calling Haley a sand nigger. (Like the president!) So here we have our troglodyte.

Cue damage control. The state Republican chair, Karen Floyd, issued a statement condemning Knotts. And if it sounds a bit halfhearted, well, this is how these things always sound. "The South Carolina Republican Party strongly condemns any use of racial or religious slurs. Senator Knotts should apologize for his inappropriate comments, so that we can put this unfortunate incident behind us and focus on issues important to moving our state forward."

Knotts, for his part, has offered up a halfhearted retraction. He was kidding around, he says. Except, also, not. "Since my intended humorous context was lost in translation, I apologize. I still believe Ms. Haley is pretending to be someone she is not, much as Obama did, but I apologize to both for an unintended slur."

And now, here comes the charge of the left brigade, arguing that Knotts, not Floyd or Haley, represents the true soul of the GOP. That, I suppose, is me.

The rumors about Haley, just like the ones about Barack Obama, wouldn't be around if they weren't compelling to some people. Knotts, who is a member of the Sons of Confederate Veterans, seems to make some sense of the world around him by classifying Haley and Obama as foreigners, Middle Eastern category (roughly). But that doesn't really prove that racism is built into the right wing. All it shows is that the right wing includes racists within it.

I'm coming to regret using the term "racist" about the Tea Party. "Racist" is a personal insult, and it's almost as impossible to prove it as to disprove it. It's not a terribly illuminating term, either: If you call me a racist, you haven't really described anything I've done that's objectionable. You've just somehow designated me, and my so-far unchallenged arguments, outside the pale, so to speak.

This is true, and it's an important point. And it gets us closer to how we have to understand racism on the right. As Joan suggests, it's not worthwhile to claim that hatred and prejudice lurk in the heart of every conservative. "Hatred" and "prejudice" aren't even really especially useful concepts. They make racism seem much more personal and individual than it really is. Because racism isn't a parasite or a virus or even a personality defect that we can detect if we just know how to read the signs. It doesn't so much live in people as it exists between them. Racism helps people accomplish something; that's why they buy into it. It's a characteristic of their relationships, not of their selves. It's negotiated and mutable, rather than fixed in the soul. And the mutation we're seeing is a relatively new one.

So if we're looking for racism on the right — if we're looking to explain Knotts — we need to look in the connective tissue of the conservative coalition, and ask, "What is racism doing here? What is it accomplishing for people?"

Knotts’ comment fits into a pattern of plainly racial solidarity underlying conservative nationalism and war-on-terror ideology. You can see this all over the place: in the insistence that Obama, our first nonwhite president, must somehow be an ally or even a member of the teeming Islamic hordes. There's the hysteria about the "Islamicization" of Europe, cast fairly plainly in racial terms. There’s the love affair between the right wing and Israel; pundits love to attribute this to Christian conservative millennialism, but that doesn't do nearly enough explanatory work. Not every conservative ultra-Zionist is also a fundamentalist Christian. It's something else: The Jews, at least, are cousins, but the Arabs are brown-skinned strangers.

Racism is, in this way, in the bones of the modern conservative movement. What we've seen in Knotts' comment is a little corner of an X-ray. Through the second half of the 20th century, anticommunism was what gave structure to otherwise disparate elements of conservatism — the libertarians, the social conservatives, the nationalist war hawks. The war on terror has had to tag in for the Cold War. Many of the trappings are the same: the paranoia about sleeper agents and Manchurian candidates within our own ranks certainly rings a bell. But the core of conservative animus and belligerence here is a belief in an irrevocable clash of civilizations that has been going on for centuries, and picks up on much of the legacy of Jim Crow-type racial conservatism.

Even within the mainstream right, it's pretty clear that Islam is widely written off as the collective ailment of a vast, unitary empire, whose people will never understand anything except force. Read the National Review or the Weekly Standard for a little while (or even the New Republic, if you know where to look), and this assumption comes across unmistakably. (While I was writing this post, an item went up at the National Review whose only clear point appears to be the suggestion that Muslims are just criminal by nature. This, only several hours after a post condemning Knotts.) This works well for the social conservatives, who think they are doing God’s work by fighting Islam; it works for the nationalist conservatives who think that the world is being divided up between America and the Muslims. (It doesn't seem to work as well for the libertarians, who’ve been getting off the bus a little bit lately.)

This isn't to say that Mark Steyn and Bill Kristol have Klan hoods in their closets. I'm sure they think of themselves as racial egalitarians and color-blind. (Well, I'm sure Kristol does, anyway.) Even Jake Knotts probably does. But they can’t defend the things that matter to them without racism. This is why well-meaning conservatives like Conor Friedersdorf get tripped up when they try to salvage the Tea Party from accusations of racism. Friedersdorf's argument was, essentially, it doesn't feel racist, it isn't supposed to be racist — so what do you want from them?

But this is the thing: There's nothing to be done. Racism lives among right-wingers, not inside them. It's the air they breathe. And without it, there wouldn't be a coherent American conservatism.