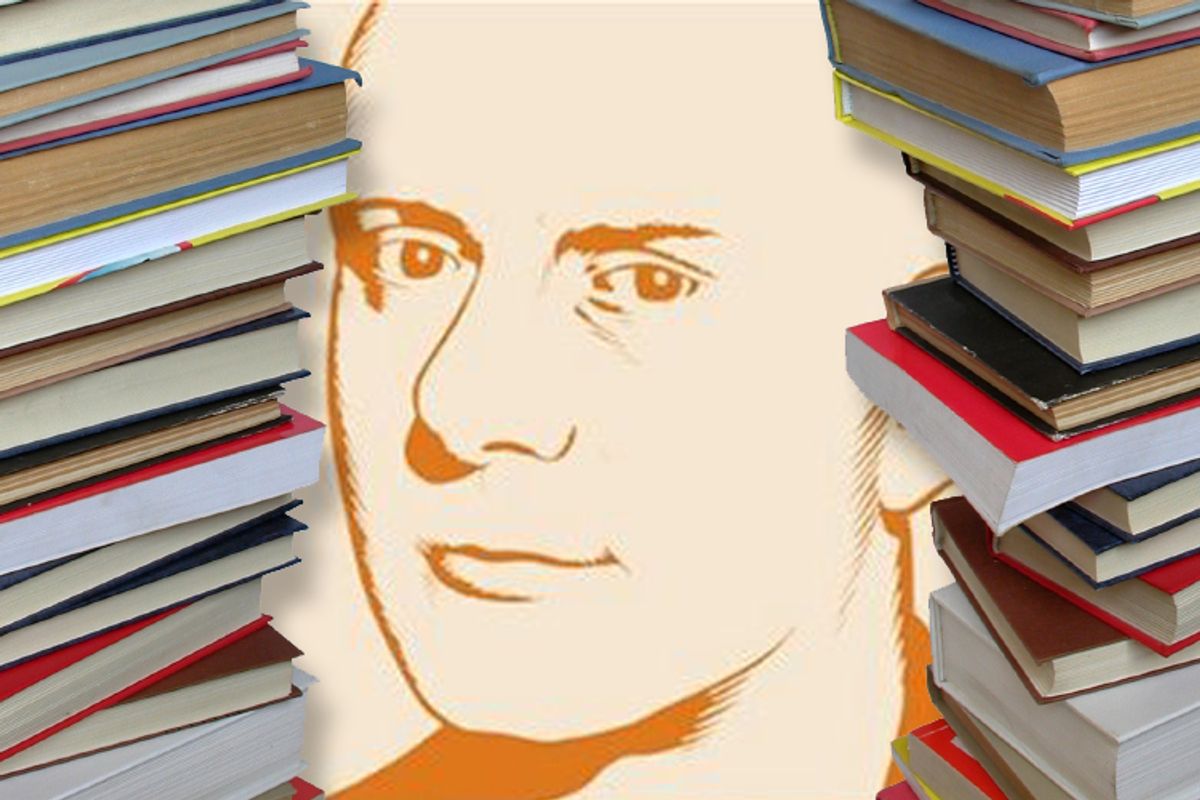 It’s never easy, returning home after failing to make one’s way out in the world. When I left these pages in 2008, it was very much in the spirit of "Good-bye, nerdy losers! I’m not wasting any more time ploughing through books on your behalf! I have things to do, places to go, people to see!" Ah, well. What can you do, if the people don’t want to be seen? I have now become that pathetic modern phenomenon you might have read about, the boomerang child -- the kid who struts off (typically and unwisely with middle finger raised), spends a couple of years screwing up some lowly job on a magazine or in a bank, and then comes back, tail between his legs, to reclaim his old bedroom and wonder how come his parents have more fun than he on a Saturday night.

"What’s a parent to do?" bewails a terrifying (for me) article dealing with this very issue on the website eHow.com. "It’s hard to turn your children away. The best thing a parent can do is help them understand that they are adults now and the rules have changed." The new rules for parents, the piece goes on to say, should include charging rent and refusing to buy toiletries and other incidentals. I’m pretty sure I’m going to end up getting my own way on the incidental toiletries, should it come to that. It’s pretty hot here at Believer Towers, and I suspect that the Poly-syllabic Spree, the 115 dead-eyed but fragrant people who edit this magazine, will cave in long before I do. Still. It wasn’t what I expected when I left: that eighteen months later, I’d be working for free deodorant. What’s particularly humiliating in my case is that, unlike most boomerang children, I’m considerably older than those who have taken me back in. They’re not as young as they were, the Spree, but even so.

I have decided to vent my spleen by embarking on a series of books that, I hope, will be of no interest whatsoever to the readership of this magazine. David Kynaston’s superlative "Austerity Britain" is more than six hundred pages long and deals with just six years, 1945–51, in the life of my country. The second volume in the series, "Family Britain, 1951–57," has already been published, so I plan to move on to that next; Kynaston is going to take us through to Margaret Thatcher’s election in 1979, and I’m warning you now that I plan to read every -single word, and write about them in great detail in this column.

I am less than a third of the way through "Austerity Britain," but I have read enough to know that this is a major work of social history: readable, brilliantly researched, informative, and gripping. Part of Kynaston’s triumph is his immense skill in marshaling the resources at his disposal: it seems at times as though he must have read every novel written in the period, and every auto-biography, whether that autobiography was written by a member of the postwar Labour government or by a member of England’s postwar cricket team. (On page 199 of my paperback, he quotes from former Labour deputy leader Roy Hattersley, Stones bassist Bill Wyman, and cookery writer Elizabeth David, all on the subject of the miserable, bitter winter of 1947.) And it goes without saying that he’s listened to every radio program, and trawled through every newspaper.

The effect Kynaston achieves is extraordinary: Britain changes month by month, like a child, and you end up feeling that every citizen of the world should have the opportunity to read a book this good about their own country. I’m glad that not everyone in the UK has read it (although it has sold a lot of copies), because you can steal anecdotes from it and pass them off as your own. One of my favorites so far is David Lean’s account of showing "Brief Encounter" at a cinema in Rochester, Kent, to a tough audience full of sailors from the nearby Chatham dockyards. "At the first love scene one woman down in the front started to laugh. I’ll never forget it. And the second love scene it got worse. And then the audience caught on and waited for her to laugh and they all joined in and it ended in absolute shambles. They were rolling in the aisles." Brief Encounter is a much-loved British film, often taken out of a back pocket and waved about when someone wants to make a point about how we have changed as a nation, and what we have lost: in the old days, we spoke better, emoted less, stayed married, didn’t get naked at the drop of a hat, etc. We are cursed with an apparently unshakable conviction that we are all much more knowing than people used to be, back in the Pre-Ironic Age, so it is both instructive and humbling to learn that, half a century ago, Rochester sailors didn’t need the Onion to tell them what was hilarious.

It’s not all about wanking, of course. "Austerity Britain" is about the morale of a battered, broke nation, and its attempts to restore itself; it’s about food rationing and town planning, housing and culture, socialism and aspiration, and it never forgets for a second that its (mostly gray and brown) tiles make up a big, big mosaic of our tiny, beleaguered island. And if you read or write fiction, you may be gratified to see how Kynaston relies on the contemporary stuff to add color and authenticity to his portrait of the times. The received wisdom is that novels too much of the moment won’t last; but what else do we have that delves so deeply into what we were thinking and feeling at any given period? In fifty or one hundred years’ time, we are, I suspect, unlikely to want to know what someone writing in 2010 had to say about the American Civil War. I don’t want to put you off, if you’re just writing the last paragraph of a seven-hundred-page epic novel about Gettysburg -- I’m sure you’ll win loads of prizes and so on. But after that, you’ve had it.

It’s been a month of enjoyment in unlikely places, if David Kynaston will forgive me for wondering whether an enormous nonfiction book with the word austerity in the title was going to be any fun. Francis Spufford’s forthcoming novel, "Red Plenty," is about Nikita Khrushchev’s planned economy, and it contains the phrase (admittedly in the extensive footnotes at the back) "the multipliers on which Kantorovich’s solution to optimisation problems depended," and it’s terrific. Yes, reading it involves a certain amount of self-congratulation -- "Look at me! I’m reading a book about shortages in the early ’60s Soviet rubber industry, and I’m loving it!” But actually, such sentiments are entirely misplaced, and completely unfair to Spufford, who has succeeded in turning possibly the least promising fictional material of all time into an incredibly smart, surprisingly involving, and deeply eccentric book, a hammer-and-sickle version of Altman’s "Nashville," with central committees replacing country music. ("Red Plenty" would probably make a marvelous film, but I’ll let someone else pitch the idea to the Hollywood studio that would have to pay for it.) Spufford provides a terrific cast, a mixture of the real and the fictional, and hundreds of vignettes that illustrate how Khrushchev’s honorable drive to bring enough of whatever was needed to his hungry and oppressed countrymen, impacted on the lives of economists, farmers, politicians, black-marketeers, and even hack writers. (There was, of course, no other type, seeing as you wrote what you were told to write.)

Francis Spufford’s name has come up in this column before: his "The Child That Books Built" is a brilliant memoir about what we read when we’re young and why. And though I am not alone in thinking that he has one of the most original minds in contemporary literature, there really aren’t as many of us as there should be. His own fantastic perversity is to blame for this -- apart from Red Plenty and the memoir, he’s written books about ice and English boffins -- but you always end up convinced that the fusty-looking subject he’s picked is resonant in all sorts of ways that you couldn’t possibly have foreseen. One of his themes here is the sheer brainpower required for the extraordinary experiment that was Soviet communism; we know now that it was an experiment that failed, but controlling all aspects of supply and demand is a lot more complicated than sitting back and letting the market sort everything out. It turns out that genius is required. Not quite as much was necessary for the conception, research, and writing of this extraordinary novel, but that’s only because novels don’t need as much as entire economic systems. Oh, come on. They really don’t.

A year or so back, my coeditor and I selected a story by Philipp Meyer for a collection we were putting together. (It came out, this collection. It was one of the many money-making schemes of the last eighteen months that failed to make money. Short stories by mostly young, mostly unknown American writers! For publication in the UK only! What could have gone wrong? Nothing, that’s what. Which is why I suspect that I’ve been diddled, and that my coeditor is currently snorting cocaine and buying racehorses in Florida.) It was pretty good, this story, so when I saw Meyer’s first novel, "American Rust," reviewed ecstatically in the Economist, of all places, I… well, I was going to say, self-aggrandizingly, that I hunted it down, like some kind of implacable bibliomaniac Mountie, but we all know that nowadays hunting books down takes about two seconds.

The cover of my copy of American Rust sports blurbs by both Patricia Cornwell and Colm Tóibín, which positions it very neatly: American Rust is one of those rare books that provides the reader with not only a big subject -- the long, slow death of working-class America -- but a gripping plot that tunnels us right into the middle of it. Isaac and Poe, early twenties, both have plans to escape their broken Pennsylvania town, full of rotting steel mills (the book is crying out for a quote from Springsteen to go alongside those from Tóibín and Cornwell). Isaac is smart, and wants to go to a California college; Poe has been offered a sports scholarship that he’s too unfocused to accept. And then Isaac kills someone, and it all goes to hell.

There is nothing missing from this book that I noticed, nothing that Meyer can’t do. His characters are beautifully drawn and memorable -- not just Isaac and Poe, but the sisters and parents and police chiefs, even the minor characters, the Dickensian drifters and petty criminals that Isaac meets during his flight from Pennsylvania. The plot is constructed in such a way that it produces all kinds of delicate moral complications, and none of this is at the expense of the book’s sorrowful, truly empathetic soul. And, unlike most first novelists, Meyer knows that we’re all going to die, and that before we do so we are going to mess our lives up somehow. There. I hope that’s sold it to you.

You have to admit that when three books this good get read back to back, I’m the one that has to be given most of the credit. Yes, I appreciate the craft that has gone into these books, the research, the love, the patience, the imagination, the immense skill -- just as I appreciate the craft that goes into the making of a perfectly spherical and lovingly stitched football. But, with the greatest of respect to Kynaston, Spufford, and Meyer, it’s the reader who sticks the ball in the back of the net, the person who really counts. He shoots, he scores. Three times. A hat trick, in his first column back! He’s still got it.