The president says we are headed in the right direction, and the Dow promptly falls by 323 points. Yep, he's wrong 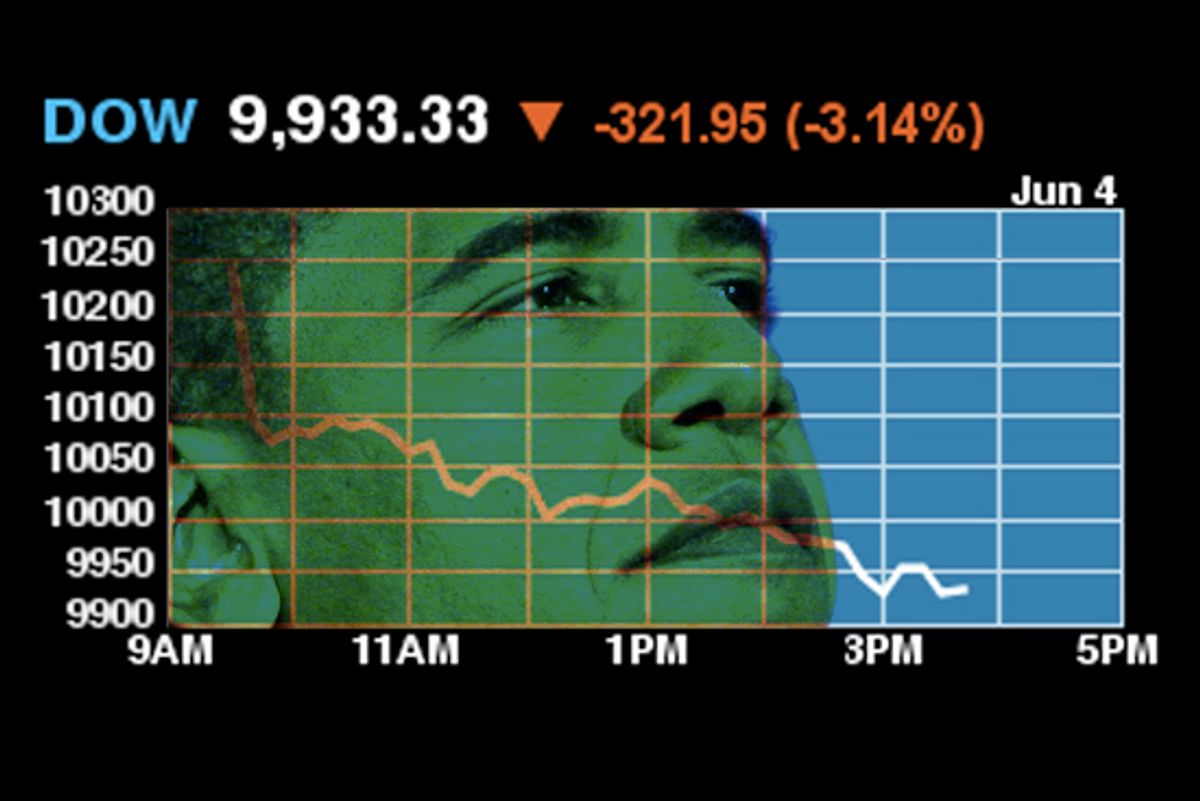 Not so fast, Mr. President! In Maryland Friday morning, Obama cited the May nonfarm labor report as "a sign that our economy is getting stronger by the day."

In typical Obama fashion, the president was careful to add nuance:

Now, I want to emphasize that most of these jobs this month that we're seeing in the statistics represent workers who've been hired to complete the 2010 census. So these are temporary jobs that are only going to last until the fall, and that may be reflected in future jobs reports.

Quite true. But the president may still end up wishing he had kept his mouth shut entirely. Because the wheels are once again falling off the global economy. Bad news from Europe, plus the much-weaker-than-expected labor report, has everyone running for cover. The Dow slumped badly, dropping around 350 points and breaking through the 10,000 barrier. The euro hit another four-year low. Oil dropped to $72 a barrel. U.S. Treasuries and gold — the ever-popular safe havens for panic-stricken investors — surged.

The trigger for the latest round of European fear and trembling is uncharacteristically frank comments from the new Hungarian government that budget woes may be worse than expected and there is a distinct possibility of default. As one bank analyst complained, "You simply cannot talk like this in these markets." (Which may explain, if not excuse, Obama's determination to be upbeat.)

But Simon Johnson and Peter Boone say the real problem is France, which is beginning to lose its own "safe haven" status. Credit default swaps on French government debt are now headed in the wrong direction.

Boone and Johnson outline a disastrous scenario in which it becomes impossible to roll over government and private debt in Europe, precipitating a full-scale crisis. But they express no confidence whatsoever that European political leaders will mobilize to meet the challenge.

"The path of least resistance is to spiral downwards," they write. And that's my nomination for scariest sentence of the year.

I don't think Obama's expression of confidence in the direction of the U.S. economy is quite as bad a misreading of reality as John McCain's infamous "The fundamentals of the economy are strong" howler. But it could definitely end up coming back to bite him as the November midterm campaign heats up. Labor market momentum is slackening, consumers appear to have relaxed their pressure on the throttle, and dangerous headwinds are everywhere. Meanwhile, Congress is busy whittling down job-growth packages and worrying about nonexistent inflation.

Have a great weekend, everybody!