The "peace jirga" and Afghan women

What would a truce with the Taliban mean for the liberation of the country's women? 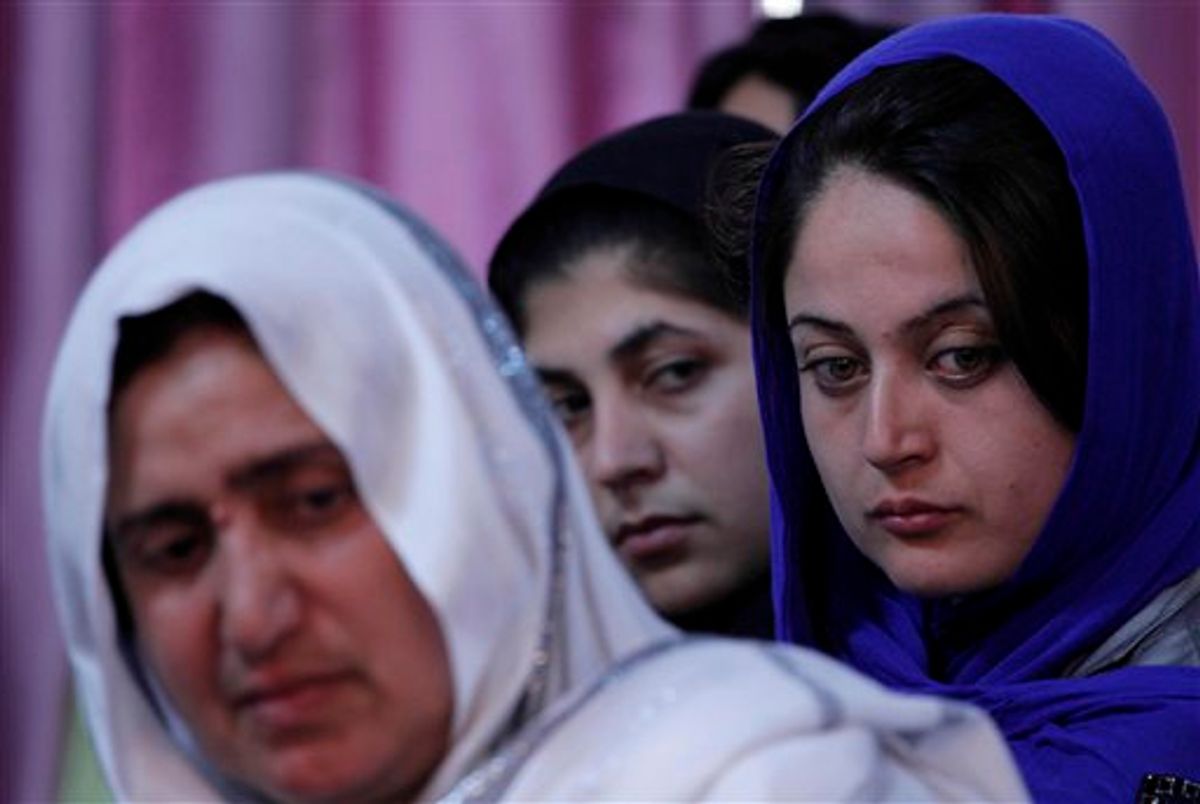 Afghan women, victims of war, look on during a "victims' jirga" (a meeting) in Kabul. Afghanistan, Sunday, May 9, 2010. Mothers of slain teenage sons, men marred by mine blasts and tearful widows were among Afghans who spoke out Sunday at a conference billed as the first major gathering of victims of decades of war in their country. (AP Photo/Dar Yasin) (AP)
--

As the third and final day of Afghanistan's three-day peace conference gets underway, it's worth asking what its implications are for the country's women. After all, the "jirga" is focused on a proposal to offer money and jobs to the Taliban -- a group not exactly known for valuing the rights of women -- if they give up their violent ways.

Soon after President Obama took office, Secretary of State Hillary Clinton reaffirmed her commitment to Afghan women, and resistance to the Taliban. Now, President Obama is backing Karzai's proposal and, according to the Guardian's Jonathan Steele,  many women in Afghanistan do too, despite potential setbacks to their freedoms. After interviewing a diverse sample of Afghan women, he came to the conclusion that their desire for peace trumps their desire for liberation.

Salon took these thorny issues to professor Robert Crews, an expert on Afghanistan at Stanford University, and co-editor of the book "The Taliban and the Crisis of Afghanistan," in search of some much-needed clarity.

Why is President Karzai reaching out to the Taliban, and why do you think the U.S. has backed this decision?

Karzai came to power promising amnesty for Taliban fighters and has repeated various versions of an amnesty proclamation since. The international community has mostly pretended that they are not real political actors. Karzai doesn't have that luxury.

It's not clear that Washington is on board. The Pentagon still thinks it can fight its way to victory and that the Taliban can be defeated on the battlefield. It has given lip service to the idea of giving menial employment to the lowest-level Taliban fighters, but I'm not so sure they are even serious about that.

Women’s rights groups are worried about the prospect of the Taliban being permitted to hold jobs in Kabul. What do you think of this?

I think we need to look at the big picture. What is the position of women there today? How do they fare under Karzai? It's not pretty. The current government also has a judiciary that implements, in a haphazard way, a kind of Islamic law. Adulterers are imprisoned. Women are not stoned to death by state courts, but they are also not well protected from domestic and other forms of violence.

Support for Karzai's theft of the election took a lot of wind out of the sails of civil society feminists who had looked to Europe and the U.S. for help. Great power politics are the order of the day, and everyone seems to know that now. Laura Bush and Cherie Blair made much of liberating Afghan women in October 2001, but who seriously talks about that anymore? The failed follow-through has bred cynicism in all quarters.

The Guardian has reported that many women in Afghanistan welcome this policy change toward the Taliban. Why do you think that is?

I think one of the mistakes that our media have made post-2001 has been to act as if there is only one Afghan public opinion. There is more than one "Afghan woman."

What's clear is that more and more people are simply fed up with war. That doesn't make one "pro" or "anti" Taliban. It's just a survivalist stance of sorts. The U.S. and NATO can't beat them, a lot of Afghans back them, so, what I think a lot of Afghans are saying is that some kind of political compromise has to be reached. My fear is that this sentiment is not compatible with American great power interests. So while the U.S. may be talking about liberating women -- and protecting them from the Taliban -- we should be very cautious about their statements.

Do you think the Taliban movement has changed since it began in 1996? If so, is it a better or worse deal for women?

There have been many changes, regarding technology, organization and a host of other issues, but the critical transformation has come as a result of their loss of power: The principal Taliban leaders seem to have devoted some time to thinking about how they lost the support of the Afghan people. This is not "modernization" per se, but it speaks to a craving for popular legitimacy. This is also not "democratic politics," but it does reflect an interest on the part of Taliban elites in creating some popular assent for their rule.

But while the Taliban appear to have been studying the mistakes they made while in power, it's not yet clear how much their policies would change with respect to women. It's important to note that different gender policies prevailed in different regions, and, in many cases, some of the policies that we now associate with the Taliban were, in fact, introduced by the mujahedin before 1996, for example, removing women from public broadcasting. We should also recall the context of civil war that has prevailed in the country since 1978. This is not to give the Taliban a pass, but to note that the gender politics of Afghanistan have a history that predates 1996 or 2001.